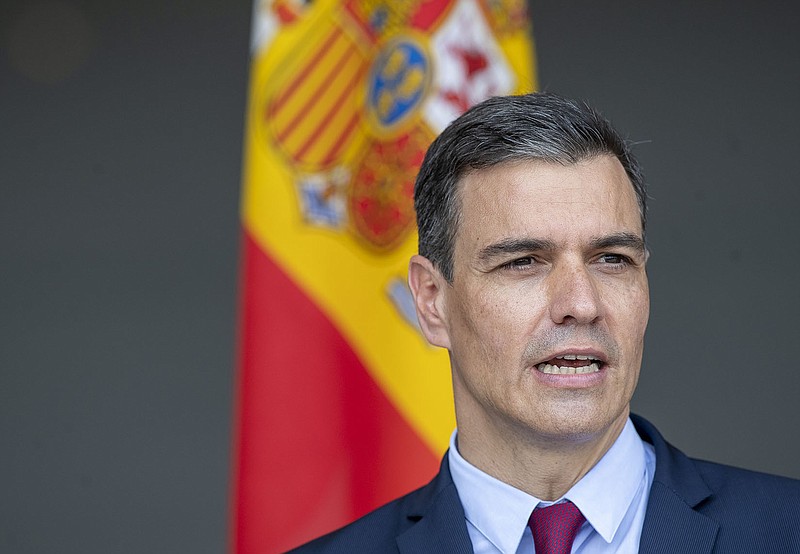 HELSINKI -- A news conference at a NATO air base in Lithuania featuring Lithuania's president and Spain's prime minister was abruptly cut off Thursday when the pair of Spanish fighter jets serving as the leaders' backdrop were scrambled to monitor errant military aircraft in the skies above the Baltics.

A NATO official who spoke on customary condition of anonymity said Thursday that Spain's jets took off "to identify two aircraft flying into the Baltic Sea area." The planes were two Russian Su-24 combat jets heading northeast, the official said.

"Those two Russian jets did not file a flight plan, did not have their flight transponder on or talk to traffic controllers," the official said.

[Video not showing up above? Click here to watch » https://www.youtube.com/watch?v=c5Rh2XKxYr8]

The Russian Defense Ministry said the two bombers flew a regular training mission over neutral waters of the Baltic. "The flight was performed in strict accordance with international rules of using airspace and without violation of any country's borders," the ministry said in a statement.

Amid tensions between Russia and the West, both Russia and NATO have regularly scrambled fighter jets to identify and shadow the other party's aircraft.

Nauseda and Sanchez were speaking with two Spanish air force Eurofighter Typhoons behind them at the base in the town of Siauliai when security officials suddenly interrupted the leaders as crews scrambled to get on the jets, live footage from the news conference showed.

"Our press conference was interrupted by a real call ... . You see, everything works great. I can confirm that the fighter jets took off in less than 15 minutes" of the alarm, Lithuanian public broadcaster LRT quoted Nauseda as saying. "Thanks to Pedro (Sanchez), we have really seen how our air policing mission works."

Sanchez told reporters when the news conference resumed: "We have seen a real case of what usually happens that precisely justifies the presence of Spanish troops with the seven Eurofighters in Lithuania."

The three Baltic nations -- Estonia, Latvia and Lithuania -- joined NATO in 2004 and have no fighter jets of their own. NATO has the responsibility of policing their airspace on a rotational four-month basis from the base in Siauliai and in Amari, Estonia.

Aircraft that member nations assign to NATO missions are on standby around the clock every day of the year. They were scrambled about 400 times in Europe last year, mostly in response to movements by Russian warplanes.

"This demonstrates once again the importance of NATO's air policing mission, which has been running for 60 years to keep our skies safe. It also shows the skills of our pilots and the close coordination among NATO allies," NATO spokesperson Oana Lungescu said.

Sanchez is on the final day of a three-day trip to the Baltic region and earlier met with officials in Estonia and Latvia.

Information for this article was contributed by Aritz Parra and Vladimir Isachenkov of The Associated Press. 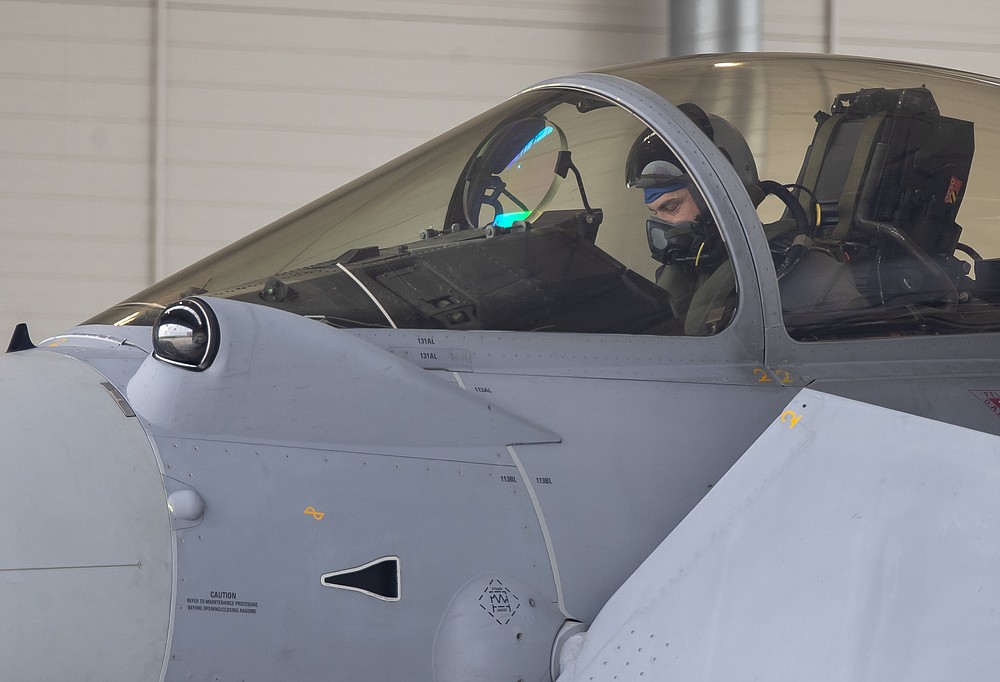 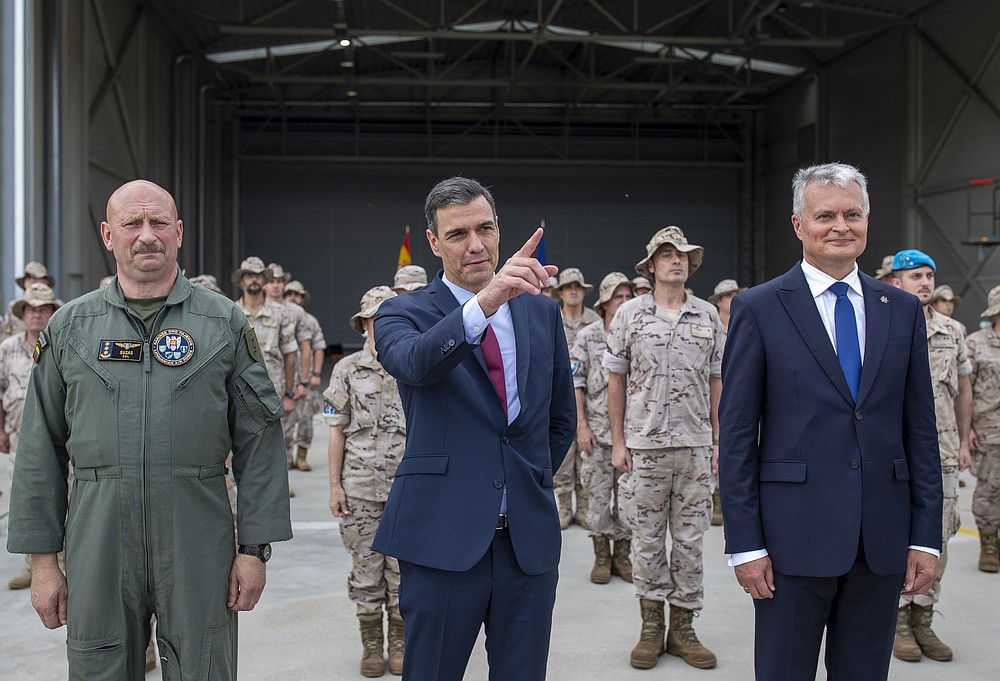 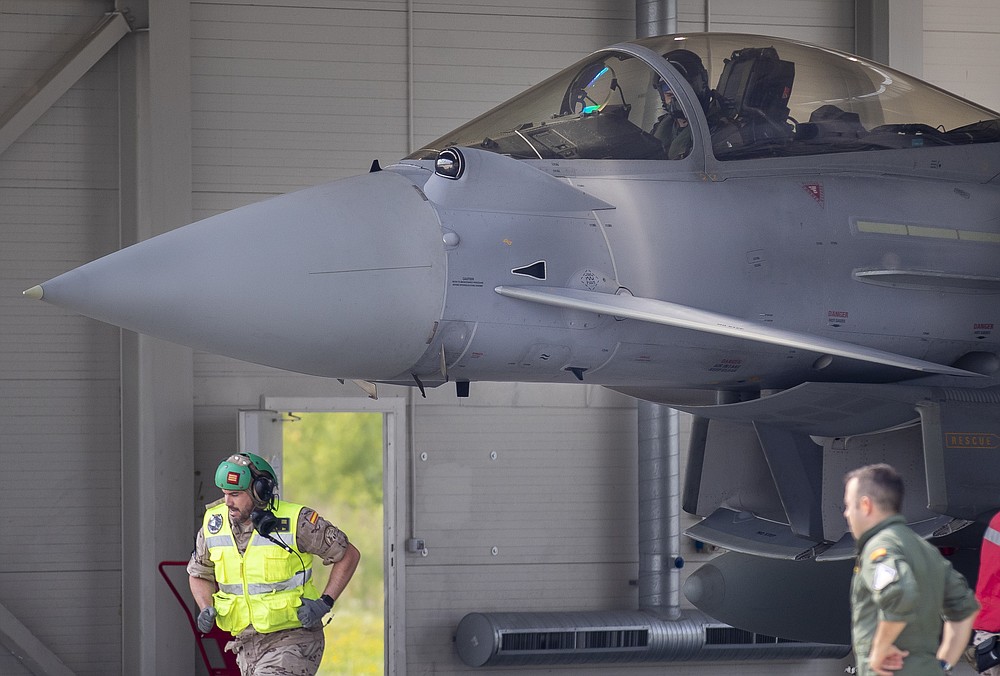