Walmart among those backing lawmakers on list through groups but not directly by The Associated. Press | July 5, 2021 at 2:00 a.m.

FILE - In this Jan. 6, 2021, file photo House Minority Leader Kevin McCarthy of California, speaks in the House Chamber after they reconvened for arguments over the objection of certifying Arizona's Electoral College votes in November's election, at the Capitol in Washington. (Erin Schaff/The New York Times via AP, Pool, File)

PROVIDENCE, R.I. -- As shock waves spread across the country from the Jan. 6 insurrection at the U.S. Capitol, corporate America took a stand against the lies that powered the mob. Or so it seemed.

Dozens of big companies, citing their commitment to democracy, pledged to avoid donating money to the 147 lawmakers who objected to Congress' certification of Joe Biden's victory on the false grounds that voting fraud stole the election from then-President Donald Trump. It was a striking gesture by some of the most familiar names in business but, as it turns out, it was largely an empty one.

Walmart, Pfizer, Intel, General Electric and AT&T are among companies that announced their pledges on behalf of democracy in the days after Trump supporters stormed the Capitol in a violent bid to disrupt the transfer of power.

The companies contend that donating directly to a candidate is not the same as giving to a PAC that supports them. Given America's porous campaign finance laws, that's a distinction without a difference to campaign finance experts.

Their argument also glosses over the fact that, in large measure, they did their giving through PACs before their pledge, rather than to individuals, so in many cases nothing changed.

"Pledging not to give to a certain person doesn't mean that much when there are so many other ways that corporate money reaches elected officials," said Daniel Weiner, a former senior counsel at the Federal Election Commission who now works at the Brennan Center for Justice at New York University's law school. "These pledges are largely symbolic."

In January, Walmart said it would suspend all donations to the 147 lawmakers who objected to the election results. But in April, the company gave $30,000 to the National Republican Congressional Committee, the party organization that supports House Republicans in elections.

Two-thirds of those House members voted against certifying Biden's win.

Walmart gave an additional $30,000 to the House committee's counterpart for Senate Republicans, the National Republican Senatorial Committee. That group is led by an objector to the election's certification, Sen. Rick Scott, R-Fla., who stands to benefit from the contribution along with seven other GOP senators who also sought to overturn the will of voters.

Messages left with both committees by The Associated Press were not returned.

In January, after the attack, General Electric said it would "halt donations to lawmakers who voted against certification" because "we believe it is important to ensure that our future contributions continue to reflect our company's values and commitment to democracy." But that's not exactly what happened.

In April, General Electric gave $15,000 each to the House and Senate GOP election groups.

Likewise, Pfizer pledged to suspend contributions to Republican objectors for six months. But after only three months, it gave $20,000 to the GOP's Senate group.

Pfizer spokeswoman Sharon Castillo said the company drew a distinction between giving money to individual lawmakers and to groups created to help those same lawmakers.

"We just don't think it is an accurate connection," she said.

Yet she said Pfizer had no commitment from the Senate election committee that the company's donation would not be used to benefit senators who voted against certification.

Campaign finance experts say there's no way to know whether the money given to Republican PACs will end up directly in the campaign accounts of incumbents who objected to the election results.

Moreover, corporate donations to the party committees do not include so-called dark money contributions given to groups that are not required to disclose details publicly. Dark money is a favored vehicle for corporate giving.

Pfizer, GE, Walmart and other companies contacted by the AP said their criticism of lawmakers who objected to the election results stands.

Information for this article was contributed by Calvin Woodward of The Associated Press. 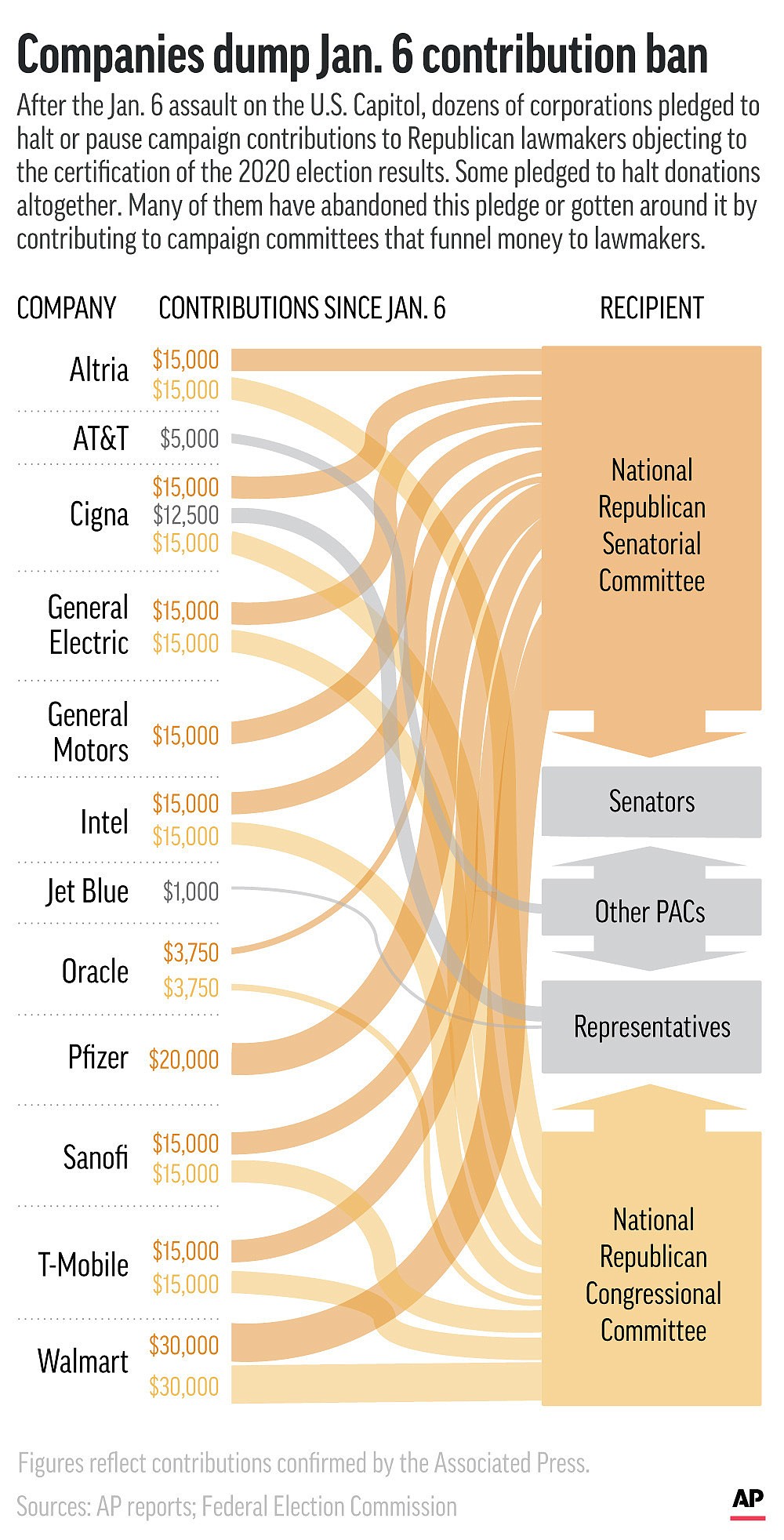 Several corporations that pledged to rethink contributions to Republican lawmakers who contested the 2020 election results are donating to the members or political action committees that bankroll their campaigns. (AP Graphic) 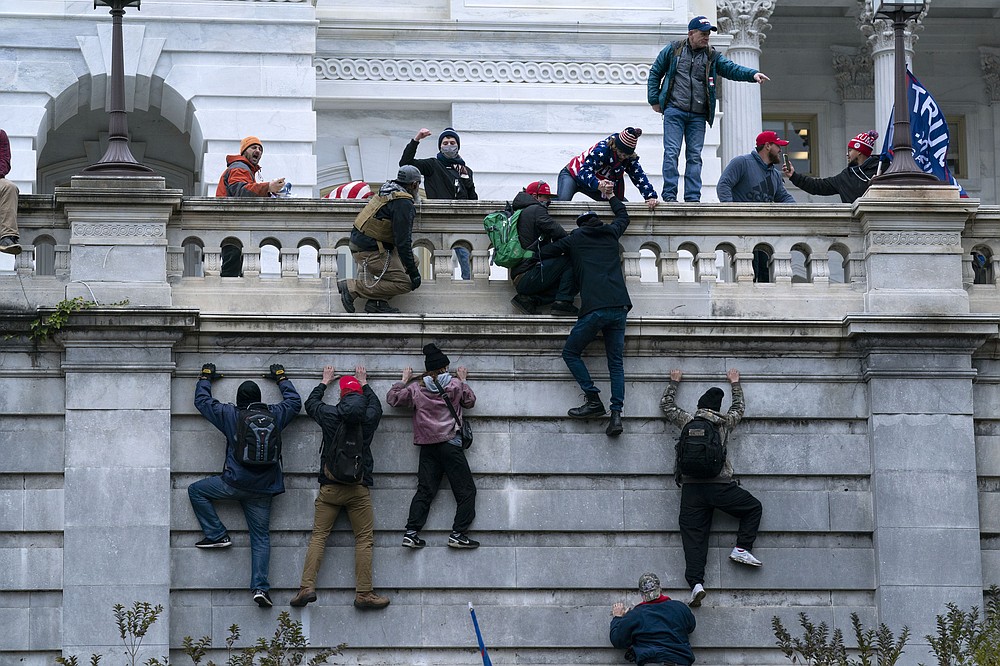 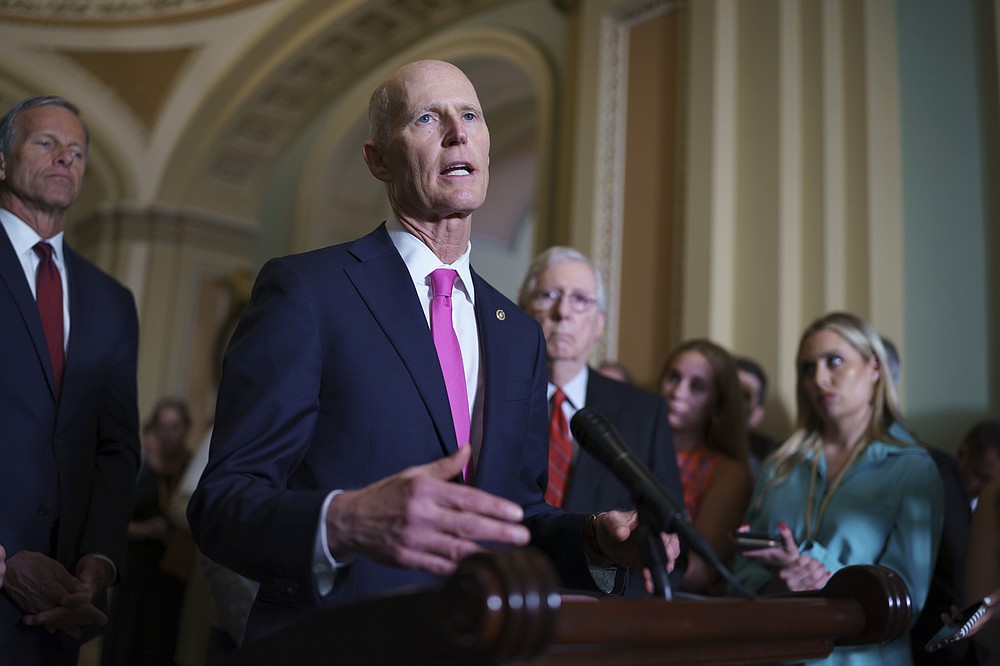 FILE - In this Jan. 6, 2021, file photo speaker of the House Nancy Pelosi speaks in the House Chamber after they reconvened for arguments over the objection of certifying Arizona's Electoral College votes in November's election, at the Capitol in Washington. (Jim Lo Scalzo/Pool via AP, File)