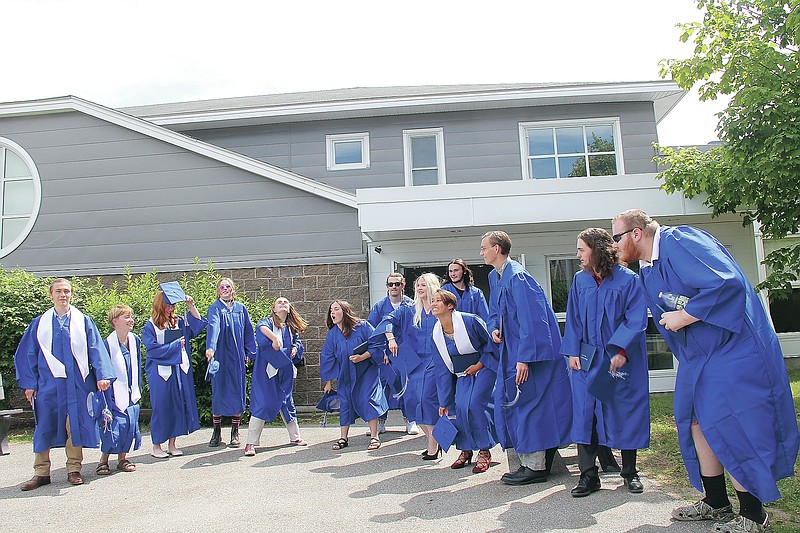 In this June 13, 2021 photo provided by Melissa Burns, Islesboro Central School seniors prepare to toss their mortarboards to celebrate their graduation. The Class of 2021 – all 13 of them – were eyeing a trip to Greece, or maybe South Korea, but they wound up going nowhere. The seniors decided to donate $5,000 to help out struggling neighbors after the coronavirus pandemic changed everything. (Melissa Burns via AP)

ISLESBORO, Maine -- Students from a Maine island high school have seen the world on senior class trips -- the Eiffel Tower, Iceland's volcanos, Norway's fjords, the canals of Italy, the tropical beaches of Panama.

This year, members of Islesboro Central School's Class of 2021 -- all 13 of them -- were eyeing a trip to Greece, or maybe South Korea. But they wound up going nowhere.

Instead, they donated $5,000 to help out neighbors struggling in the wake of the pandemic.

It was painful, no doubt. But in the end, it wasn't a difficult decision.

"It felt sort of obvious that it needed to go back to the island community," said Olivia Britton, 17, of Belfast, one of this month's graduates.

Before the pandemic put the kibosh on further fundraising -- including their annual auction -- the seniors raised nearly $8,000 by working concession stands, holding harvest and winter festivals, and hosting community suppers.

Much of that money would end up going to the Island Community Fund to help people suffering from covid-19-related job losses to put food on the table or cover unexpected expenses.

The pandemic hasn't been easy for young people anywhere in the United States, and the tight-knit island community has felt the effects keenly.

Five of the Islesboro Central School seniors take the ferry from the mainland, while the rest live on the island, which has about 700 year-round residents. So the students weren't only isolated by the pandemic but they were also split apart, unable to gather for months, with a three-mile gulf between the island and the mainland.

The Class of 2021 had long been accustomed to doing things together. For Halloween, the class would coordinate group costumes and pile into a school-owned van, driven by an English teacher, to go trick or treating together on the island.

It was a large group, by island standards. In fact, the 13 seniors represented the largest senior class in recent years.

As the reality of the pandemic took hold, the seniors kicked off an email chain to discuss what to do about the trip. International travel was a no-go, so Greece, South Korea and Japan were no longer options.

They thought about scaling it back. Perhaps they could do a regional trip. It would be better than nothing. But even that started to seem far-fetched.

The world's struggles weighed on them as they tried to justify salvaging an exotic outing against a backdrop of deaths and economic pain.

It would have seemed "weird and definitely wrong" to be spending money on an overseas trip during a time of such difficulties, said Liefe Temple, 18, of Lincolnville.

"We could really see how the whole world and the island, too, was struggling. So it felt really good to do that with our money, to give it back to the people who gave it to us," Temple said.

The president of the Isleboro Community Fund said there were cheers, high fives and even some tears when the board learned of the donation.

"When everything settled down, there was a strong sense of pride in these students. That's because their decision demonstrated an awareness of the hardship in their community and a willingness to do something about it," Fred Thomas said. "They learned that giving is hard, but giving is good."

Some money also was used to defray unexpected costs associated with operating COVID-19 vaccination clinics; the students got a kick out of knowing they contributed to their teachers and peers getting the jab. They're still deciding where to donate thousands of dollars that are left.

Word of their gesture spread through a news account in their local newspaper. They received a warm response on the island, said Britton's mother, Megan Britton, a family doctor who advised the Class of 2021 on fundraising for the trip.

The consensus: "People complain about the youth today but this really flies in the face of that. Not these kids, at least," she said.