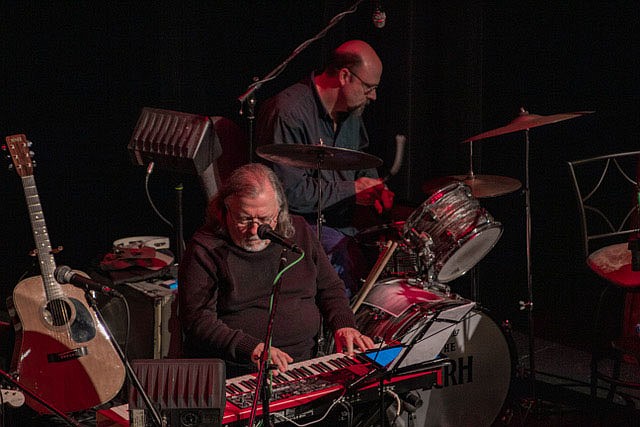 The March 2020 “Local Color Radio Hour,” live from the historic King Opera House in Van Buren, featured Joe Hardin on piano and vocals, backed by Kevin Jones on drums and Eric Mathews on guitar. The variety show returns July 10 as a fundraiser for the Fort Smith Museum of History. (Courtesy Photo/Kevin Jones)

Take "Prairie Home Companion." Stir in a little bit of the "golden age of radio," add a touch of "Saturday Night Live." And focus it all on Fort Smith history. The result is "The Local Color Radio Hour," a variety show which returns to the River Valley July 10 as a benefit for the Fort Smith Museum of History.

Established in 1910, the Fort Smith Museum of History is perhaps best known for its old-fashioned soda fountain and 1920s-'40s era pharmacy. The museum's stated mission is to "collect, preserve and share the history and culture of Fort Smith and the surrounding region."

"Our first show was at the Fort Smith Museum of History in March 2018, and since then, we have offered shows seasonally, or around special events for the museum, as well as for other groups, such as a special Christmas show we did for the South Sebastian County Historical Society in Greenwood and one for the Questers International Statewide Convention held in Van Buren," says Kevin Jones, who is the director of the show and founder of Spinnin' Round Productions. "With Caroline Speir and Leisa Gramlich, the former [museum] director, we kicked around ideas of focusing on 'Little Known Facts' and 'What's on Display,' similar to 'Mysteries at the Museum' with Don Wildman, to encourage people to visit the FSMH and to highlight the collection.

"Our shows are focused on a historic place first, unique people and events, and we have a theme," Jones continues. "Our July show is a 'Celebration of Summer' and is unique as we have never had an outdoor 'Local Color Radio Hour' before, and I thought this was perfect timing as most are wanting to 'get outside' and enjoy live entertainment again."

The evening at Harry E. Kelley Riverfront Amphitheater will include the Boss Tweeds, self-described as "rockabilly roots with a modern twist"; Nick Probstfeld, a multi-instrumentalist and songwriter who will showcase local history and join in with the house band on several tunes; Cody Faber, the Roving Rambling Ranger, along with his sidekick Shawn Mann; and additional entertainment by Joe Hardin, The Numskulls, Dennis Siler, Katrina Brandli, Marion Laird Will McCoy and Jones himself.

"Joe Hardin serves as the musical director, and he is an amazing player, arranger, multi-instrumentalist, songwriter, recording artist, who has loads of patience and has played with various bluegrass bands, and with James Burton (Elvis' guitar player in the TCB band), Badfinger, the Pat Moss Band, and many more in a long career as a professional musician," says Jones. "The current show has been in development since March 2020 and includes a highlight on the 'Arkansas Traveler' song; a jazz standard featuring former Branson performer, Maggie Jones; and many interesting facts about the river, summer stories and comedy sketches, audience trivia and much more."

The "Local Color Radio Hour" is formatted like an old-time radio show, Jones reminds, so expect it to include live commercials for a list of sponsors that includes Taliano's Italian Restaurant, Emmy's German Restaurant, Jennifer and Tom Kelly, Jeremy Wann, Attorney at Law, and Yeager Hardware and, of course, history segments with the museum's executive director, Caroline Speir.

"Every performer, song, skit, commercial, special guest, is chosen and placed in a particular order to fit the overall theme or mission of the show," promises Jones. "If nothing else, we give our audiences as much as we can of music, history, comedy and more in every show." 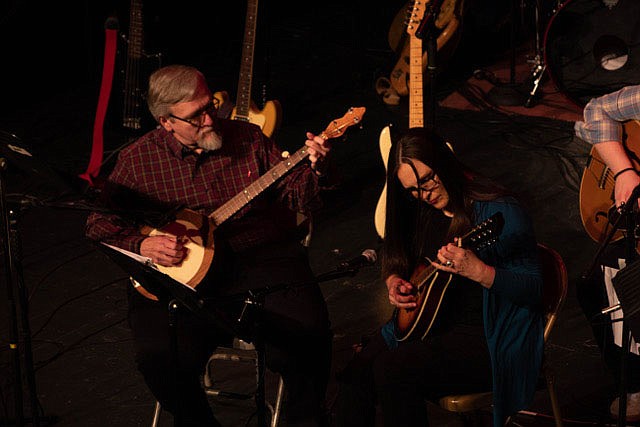 Also performing at the March 2020 “Local Color Radio Hour” were luthier Dennis Siler of Siler Guitars, playing “Foggy Dew” on a banjo he crafted, along with Katrina Brandli on mandolin and vocals. The next edition of the show will take place July 10 at Harry E. Kelley Riverfront Amphitheater in downtown Fort Smith. (Courtesy Photo/Kevin Jones)
More News

FYI — Lawn chairs are welcome. Food trucks and Kona Ice will be available.