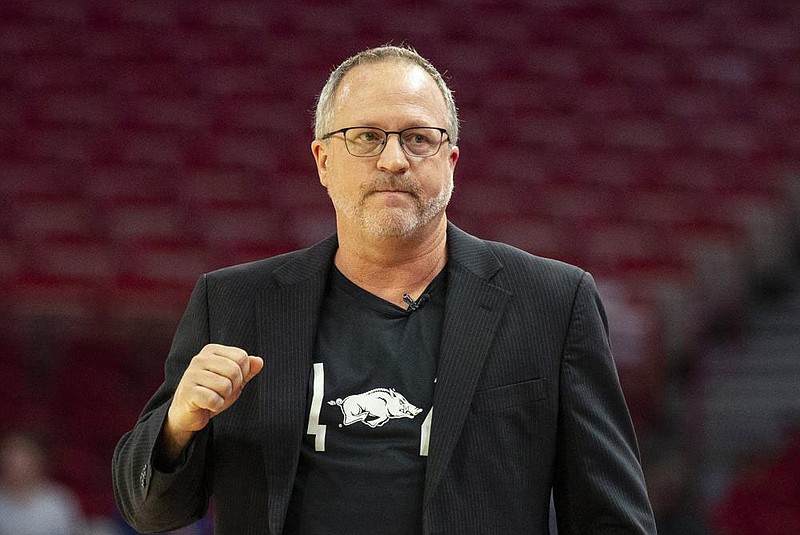 FAYETTEVILLE -- University of Arkansas women's basketball Coach Mike Neighbors took a page from a reality television show, and it helped pave the way to bring 11-time national champion Connecticut to Fayetteville next week.

With all the covid-19 uncertainty swirling before the season even began, he thought it was likely games would be lost, and being able to schedule replacements on the fly would be a priority.

That's why he became a part of a text group of coaches started by Louisville Coach Jeff Walz to stay in contact if teams needed to pick up a game quickly.

"It was like the old days of "Survivor" ... form alliances ahead of time," Neighbors said. "I'm like, 'If y'all need a game, I'm willing to play whoever, wherever, whenever.'

"We developed a little alliance text message group that were just willing to play if that opportunity came up."

That's what led to No. 15 Arkansas (11-5) being able to schedule the No. 3 Huskies (9-0), who defeated Tennessee on Thursday night, to come to Walton Arena for the 4 p.m. Thursday tip. The game between nationally ranked opponents fills the open date created when Vanderbilt decided to end its season because of a combination of covid-19 issues, injuries and opt-outs.

[Video not showing up above? Click here to watch » https://www.youtube.com/watch?v=R7zvUm8k1qU]

The Razorbacks have played the most games of any Division I team in the country, but Neighbors' planning ahead paid off earlier this week.

He got word Monday afternoon about Vanderbilt after the team's charter landed in Columbia, S.C. He sprang into action to fill the date after visiting with the team following their game against South Carolina that night.

"UConn had reached out back in early August, late September," Neighbors said. "We had some others reach out but none of them had 11 national championships. It was UConn from the get-go.

"I texted [UConn coach] Geno [Auriemma] a couple of times ... we got the paperwork done literally overnight."

Communication was key though, Neighbors said. The text group includes his old friend Kevin McGuff, the head coach at Ohio State, not to mention coaches from other top programs like Arizona, UCLA, South Florida, Walz and others.

The size of the group thinned as the season progressed, Neighbors said. But he stayed the course. That paid off.

"[Associated head coach] Todd [Schaefer] kept a tally sheet of who needed games and what dates," Neighbors said. "Staying in contact was huge. But it was perfect timing, a lot of preparation ahead of time and then being quick to action."

The Razorbacks players expressed a willingness to play the best opponents in the country, but that choice comes at a price, too, Neighbors said. If he had chosen to play a lesser quality team that might have given him a chance to get younger players more court time.

"That's the part that I'm sick to my stomach about," Neighbors said. "It's hurting our freshman development and our bench development for the future that we don't have these games you anticipate winning by enough to where they're gonna get actual game minutes.

"We miss several opportunities to have those games. ... The fact that the NCAA gave those kids that year back is a little bit of a Band-Aid."

Excitement is building for Thursday's game as Neighbors said there were less than 1,000 tickets left as of Thursday afternoon. There's a limit of 4,000 in the arena, per covid-19 protocols.

It will also likely mean a return game sometime in the future to Storrs, Conn., he said.

"We will go back to Storrs eventually, I promise you," Neighbors said. "I'm not sure what year it will be. I want to go back. I want to take our kids up there and see it."

Before it takes on UConn, Arkansas travels to No. 22 Georgia for a SEC game Monday evening.