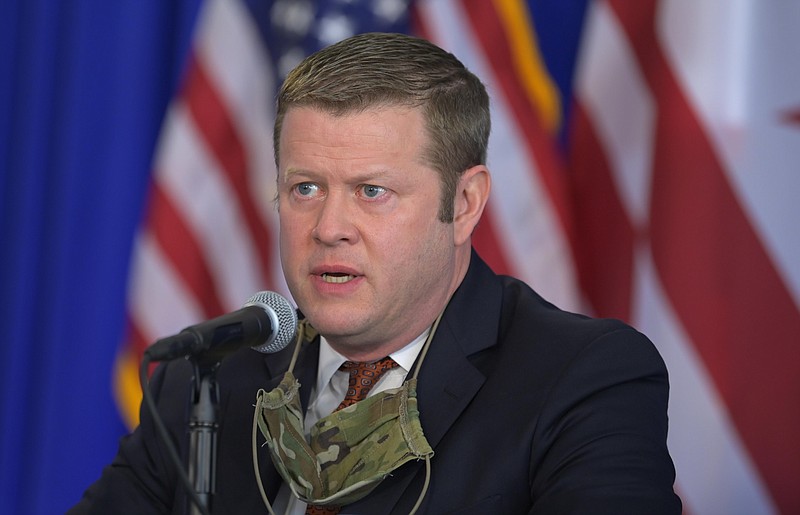 WASHINGTON -- Army Secretary Ryan McCarthy resigned Wednesday in a letter sent to the military's largest branch, capping a term of tumultuous moments that ended with the unprecedented use of the National Guard at home.

His departure comes amid questions about his role in readying National Guard troops to respond to the U.S. Capitol riot in Washington, D.C., on Jan. 6, and about whether delays contributed to the disastrous outcome. His responsibilities included overseeing the use of guard members in the District of Columbia.

McCarthy's resignation ends speculation about whether the Biden administration would retained him for further service. McCarthy, a former Army Ranger who served in combat, was one of a handful of early Trump appointees who made it to the end of the administration.

"When I was a young officer, I bought into an oath that I would never fail my comrades and continue to believe in that same oath today," he wrote in the letter.

The military's role and responsibility during the Capitol protest, and whether delays of soldiers worsened the deadly incident, have come under scrutiny.

In the aftermath, McCarthy told Rep. Jason Crow, D-Colo., that because local and congressional authorities didn't articulate additional needs ahead of the event, the D.C. Guard was not prepared for other contingencies such as the need to respond swiftly to an insurrection at the Capitol, according to notes on the call that Crow released.

McCarthy also said that because of a lack of coordination and preparation, there wasn't a functioning operations center at the Pentagon to manage the small Guard presence on the streets at the time, according to Crow.

"Thank you for the opportunity to serve this great Nation, as this has been the honor of my life," Adams wrote in a departure note posted to Facebook. "I hope in 2021 and beyond, we can focus more on what unites us, and rise above what divides us."

Adams, who was nominated by President Donald Trump, was sworn in as surgeon general Sept. 5, 2017, to serve the office's standard four-year term, which was to expire in September.

The anesthesiologist and former Indiana health commissioner had emerged as a key spokesman for Trump's coronavirus response, regularly appearing on national TV and using social media to advocate for public health measures such as social distancing. However, Adams's visibility also made him a target last spring for Democrats, who accused him of defending Trump's statements.

Biden has nominated Vivek H. Murthy, surgeon general under President Barack Obama, to be the nation's new surgeon general, but Murthy first needs to undergo Senate confirmation hearings, which have yet to be scheduled.

Also leaving is Michael Pack, who resigned as the chief executive officer of the U.S. Agency for Global Media just minutes after Biden was inaugurated Wednesday. The agency runs the Voice of America and sister networks.

Pack had created a furor when he took over the agency last year and fired the boards of all the outlets under his control along with the leadership of the individual broadcast networks. The actions were criticized as threatening the broadcasters' prized editorial independence.

Biden had been expected to make major changes to the agency's structure and management, but Pack's early departure signaled that those may be coming sooner rather than later. Though many presidential appointees resign when a new administration comes in, Pack was not required to so. His position was created by Congress and is not limited by the length of a particular administration.

In resigning, Pack cited the incoming administration's desire for new leadership at the agency.

"I serve at the pleasure of not one particular president, but the office of the president itself," Pack said in a resignation letter sent to staffers. "The new administration has requested my resignation, and that is why I have tendered it as of 2 p.m. today."

Information for this article was contributed by Alex Horton, Paul Sonne, Missy Ryan and Dan Diamond of The Washington Post; and by Matthew Lee of The Associated Press.