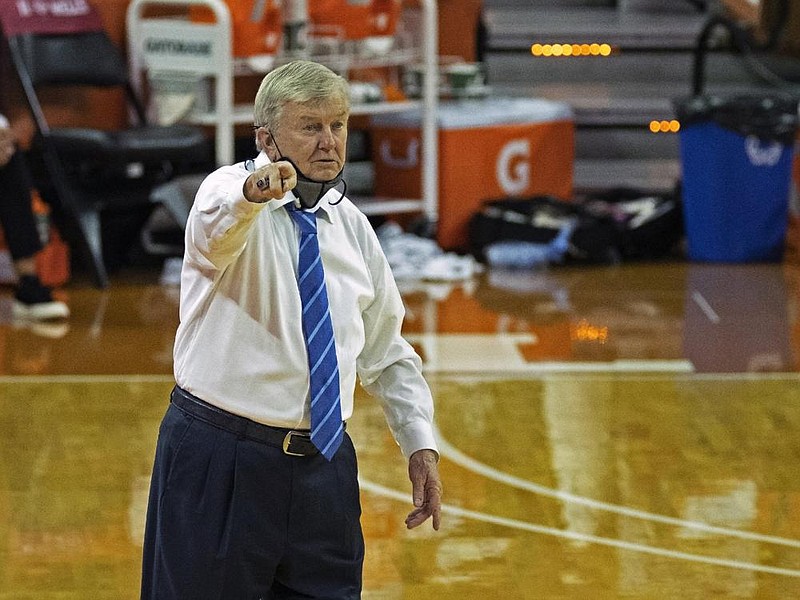 Texas A&M Coach Gary Blair’s No. 7 Aggies (12-0) can set the program record for its best start with a victory against LSU. However, he said his team should not look past the Tigers. “If we sit there and start patting ourselves on the back in this league, it’ll reach up and bite you in a hurry,” he said. (AP/Michael Thomas)

No. 7 Texas A&M is off to a red-hot start, but there's a significant hurdle ahead.

The Aggies (12-0, 3-0 SEC) are a victory away from their best start ever, but they will have to beat an LSU team that's won five of the previous eight meetings. They also play in Baton Rouge, where Texas A&M hasn't won since 2016.

Texas A&M Coach Gary Blair said in his weekly Zoom conference Tuesday that his team can't think too much about past success.

"If we sit there and start patting ourselves on the back in this league, it'll reach up and bite you in a hurry," Blair said. "You start thinking about Sunday or you start thinking about what we've just accomplished in the last two ballgames. I've got a coaching staff and a veteran team that will not let that happen."

The Aggies came up with big plays late to beat two ranked teams in then-No. 10 Kentucky and then-No. 13 Arkansas. Jordan Nixon's runner off the glass with 0.4 seconds left was the difference against Arkansas. The Aggies dominated the second half to break from a 31-31 halftime tie to claim a 77-60 win over the Wildcats.

But the Tigers (4-6, 2-2) have been trouble for Texas A&M, winning three of the past four meetings. They have held the Aggies under 60 points in each of those four games.

This will be a case where the Aggies will actually want to play a little faster in contrast to what they wanted to do against Arkansas.

[Video not showing up above? Click here to watch » https://www.youtube.com/watch?v=i5xwSKsP7T8]

"Arkansas, we refused to get into a 'Let me show you this move or let me show you that move,' " Blair said. "I thought we did a great job of slowing the game down and running our sets when we had to.

"And then against LSU, we want to play a little bit faster. We want to score in the 70s. They want it in the 50s."

No. 14 Mississippi State escaped with its 14th consecutive win over rival Ole Miss 60-56 on Sunday.

The Bulldogs won despite missing eight of their last nine shots. Mississippi State built a 14-point lead in the second half only to see the Rebels come charging back.

Thanks in large part to former coach Vic Schaefer and the Bulldogs' rise to national prominence, the past decade-plus worth of in-state battles have followed a dominant trend in the series history. After the Rebels took 50 of the first 51 meetings, the Bulldogs have won 19 of the past 21. Ole Miss hasn't beaten the Bulldogs in Starkville since 2007.

The Texas A&M men's and women's teams will each host a Beat The Hell Outta Breast Cancer Game at Reed Arena this season. The women's game will be against Missouri on Feb. 18.

Fans can donate with 100% of the proceeds going to the Pink Alliance and the Kay Yow Cancer Fund. This year's T-shirts are $10 each.

Aggies women's assistant coach Bob Starkey is going to donate $1 for each shirt split between the two charities. Starkey's wife, Sherie, is a breast cancer survivor.

Boston, a 6-5 sophomore, finished with a game-high 12 rebounds, 20 points and 7 blocks at Kentucky in 25 minutes. She helped the Gamecocks rally from a nine-point halftime deficit to win. Her seven blocked shots tied a career high.

Gordon, a 6-0 swing player, saw her most playing time to date in an SEC game with 22 minutes at Vanderbilt, finishing with six points, three rebounds and a block. She knocked down the first three-pointer of her Alabama career in the win over LSU, and followed that up with two in the victory against the Commodores.

Hours before tipoff, Missouri's game at Auburn on Sunday was postponed due to a combination of positive covid-19 tests, contact tracing and subsequent quarantining of individuals within the Auburn program.

Missouri's previously scheduled game with Vanderbilt on Jan. 7 was postponed due to the Commodores' covid-19 troubles, making this announcement the second time an SEC team has had to reschedule with the Tigers. Missouri (4-3, 0-2 SEC) hasn't played since a 91-88 loss at Arkansas on Jan. 3.

Missouri underwent a 17-day layoff earlier in the season due to a virus outbreak within its program.

The Tigers are scheduled to play next at Ole Miss at 6 p.m. tonight.

The 5-7 senior from Boca Raton, Fla. scored 14 in Vanderbilt's loss to Alabama on Sunday and now sits 37th on the all-time scoring list with 1,007 points. It was the Commodores' first game since Dec. 20 because of covid-19 issues. Vanderbilt had just eight players available for the game.

From top to bottom

NOTE The NCAA instituted this season for women's college basketball, a rating system called the NET Rankings, which took the place of the Ratings Percentage Index. An acronym for NCAA Evaluation Tool, the NET rankings take into account game results, strength of schedule, game location, scoring margin, net offensive and defensive efficiency and the quality of wins and losses. This set of rankings is the second of the 2020-21 season.

The Aggies will play their third ranked opponent in four games and try to keep their red-hot start going. The Bulldogs held off Ole Miss on Sunday and have won two in a row.

7 Victories without a loss by Georgia seniors against Florida

12 Consecutive wins South Carolina has over Georgia, which it plays tonight