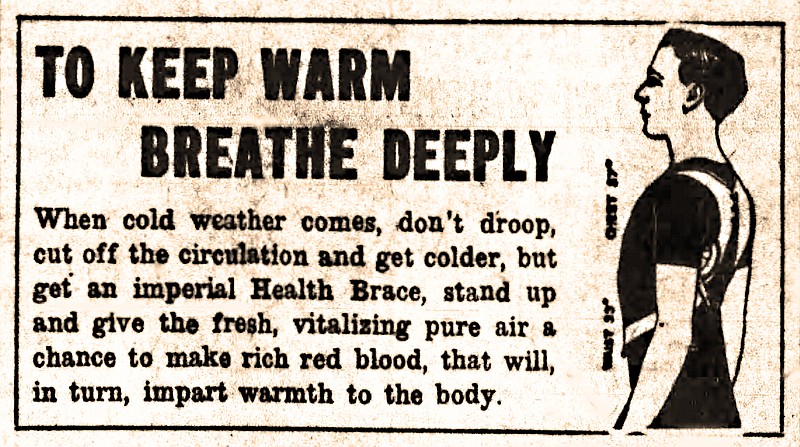 This peculiar health advice was part of an ad in the Jan. 8, 1921, Arkansas Gazette for Little Rock drugstore Snodgrass & Bracy, a Rexall affiliate at 120-122 Main St. (Arkansas Democrat-Gazette)

From the Jan. 5, 1921, Arkansas Gazette: A new system of operating the city Garbage Department was discussed by the mayor's Citizens' Advisory Board. The department superintendent proposed charging every house in the city a set annual fee for garbage disposal.

Nine years into the garbage-collecting business, Little Rock was about to get into the municipal-waste-tax business. At the time, residents paid voluntary fees to have garbage removed, as needed. Some were not keen to subscribe for garbage removal ...

A reader signing him/herself "A Housekeeper" expresses consternation and amazement at the proposal:

"One should pay for value received and no more."

Housekeeper's argument: "Most people keep chickens." The chickens consumed "the garbage proper," and the balance of refuse to be disposed of would depend entirely upon the size of the family as well as the orderliness of the housekeeper.

"In my own case the disposal of this has been less than $1 per year for the last 20 years," Housekeeper wrote.

"In considering plan for garbage removal it should be remembered that there are also individual housekeepers who can have no use for a garbage can; and that some dwellings keep a wood-burning stove; and again, that some few are not consumers of meat, who do not touch a piece from the first day of the year to the last; these are certainly call for protest."

Why (oh, why?) would vegetarians ever require garbage removal?

From the Jan. 8, 1921, Gazette, Page 1: Bill, a Shropshire ram, roamed freely over the streets of Calico Rock, cowing local dogs, goats and part of the citizenry. Dogs that were inclined to worry hogs, cattle and the like left Bill and his hard head alone:

“Bill ain't afraid of anything and holds his ground under any kind of attack.”

Merchants on the eastern end of town couldn't keep him out of their shops. The Gazette reported that he had strolled into the W.L. Talburt store and commenced eating a bolt of gingham on the counter.

Talburt tried to drive the ram out, but Bill "showed fight." Afraid the animal would break his glass showcases, the storekeeper let him eat the gingham until he tired of it and made his exit.

From that Jan. 8 Gazette: The Arkansas Diamond Corp. near Murfreesboro in Pike County had suspended soil tests for winter. S.H. Zimmerman, engineer in charge, said the time would be spent installing new machines. Also, it would allow the company to avoid the high cost of handling earth that was wet and heavy:

“Rains and freezing temperatures render the peridotite and the underlying gumbo soil expensive to handle with the present testing equipment, but no seasonal interruptions will be necessary when the permanent plant is installed.”

Set up in September 1920, the temporary plant had been washing tons of dirt to see if diamonds turned up. I assumed Zimmerman meant that it took more fuel to power his digging machine when dirt was wet, but the article suggests the extra expense was labor.

The diamond diggers were local farmers, and they preferred to work on their own crops in winter and early spring, the article stated.

From the same Jan. 8 paper:

Anderson "Devil Anse" Hatfield, a leader in the historic Hatfield-McCoy feud, had died in West Virginia, of natural causes.

The notorious armed conflict between members of the Hatfield and McCoy clans there had begun 30 years earlier, the paper said, over hogs. A Hatfield won a lawsuit claiming ownership of the hogs, but the McCoys refused to accept the verdict. One of Devil's brothers was shot and wounded. Eventually Devil himself was accused of killing a McCoy. But he was OK, the article suggested: "Devil Anse" had none of the attributes of the "bad man."

And he had been protected by a judge and a governor; Devil was eventually acquitted. The report marveled:

“Shot at from ambush and in hand-to-hand combat scores of times with the McCoys, he had always predicted he would live to die a natural death without bearing any marks of battle.”

The article ended by noting that Hatfield briefly considered a career in vaudeville but gave up the idea "when an old indictment was produced that had been quashed on condition that the old mountaineer agree to remain at home the rest of his days."

Jan. 11, Gazette, Page 1: President-elect Warren G. Harding had telegrammed the Washington Inaugural Committee requesting that they abandon all plans for erecting a platform and viewing stands on the grounds of the Capitol for his inauguration.

Also, he did not want a parade or a ball. Even though most of the expense of those traditions would have been borne by private donors, Harding did not want an elaborate inaugural to create "an impression of extravagance."

See that telegram and a related letter to the committee at arkansasonline.com/111gram.

Does this mean there was no massive crowd? See photos of the turnout at arkansasonline.com/111crowd.

According to the Library of Congress website on presidential inaugurations, Harding was the first president to ride to and from his inauguration in an automobile. President Woodrow Wilson rode with them. Having survived a stroke, Wilson was frail, walked using a cane and was helped down stairs.

After the inaugural speech and a meeting by Harding and his wife with lawmakers at the Capitol, Wilson and his wife hosted lunch in the White House for the incoming presidential couple. Then the Wilsons graciously departed.

Yes, it has been quite a bit longer than a minute since 1921.