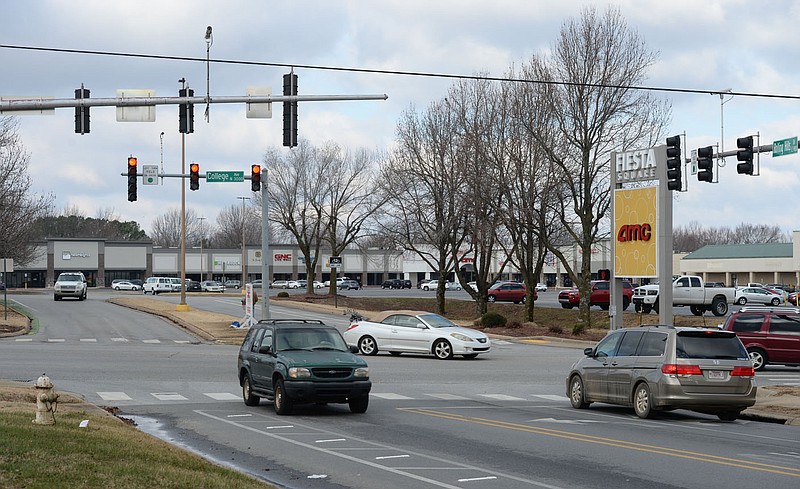 Traffic flows Friday through the intersection of Rolling Hills Drive and College Avenue in Fayetteville. The city has conceptual designs that place a roundabout in the parking lot of the shopping center, connecting Rolling Hills Drive, Appleby Road and Plainview Avenue. Visit nwaonline.com/210110Daily/ for today's photo gallery. (NWA Democrat-Gazette/Andy Shupe)

FAYETTEVILLE -- Drivers, pedestrians and bicyclists should be able to get through a shopping center and its nearby streets easier once a roundabout is installed, engineers behind the project's design say.

Conceptual designs have been completed for a roundabout, street connections and intersection realignment at Fiesta Square, west of College Avenue and Rolling Hills Drive. The project, with a $3.5 million budget, is part of a transportation bond issue city voters approved in 2019.

The City Council's Transportation Committee held an online meeting Dec. 29 and reviewed the designs for the project. The intersection will get an overhaul, with traffic lights retimed and Rolling Hills Drive feeding straight into the shopping center, rather than at a slight angle like it does now.

About 200 feet west of the intersection, a roundabout will connect Rolling Hills Drive, Appleby Road to the south and an extension connecting what is now a dead end at Plainview Avenue to the north. Each of those streets will have wide enough sidewalks to accommodate pedestrians and bicycles. Bicycles approaching the roundabout will have the option of going through it in the car lane, or using the sidewalks and crosswalks.

A concern is having enough space between the intersection and the roundabout, said Ron Petrie with Garver, the engineering firm hired to design the project. The firm did a traffic analysis and determined the intersection improvements and re-timing the traffic signal should prevent cars from lining into the roundabout while waiting for the light at College Avenue to change, he said.

"We've really got to get traffic out of the intersection so it doesn't back up into the roundabout," Petrie told the committee.

City officials hope the connection from the roundabout at the shopping center north to Plainview Avenue, which connects to Millsap Road, will relieve traffic at Millsap and College Avenue.

The project next will move into the preliminary and final design phases, City Engineer Chris Brown said. Right of way will have to be acquired and bids for construction contractors should go out by the end of the year, he said.

Construction should start soon after that and take most of next year to complete, Brown said.

"On most of our projects that are in the $1 million to $5 million range, it's a year to design and somewhere around a year to construct," he said. "That's pretty typical."

Mathias Properties owns the shopping center and all the buildings. Arthur Thurman, president and chief operating officer, said engineers hired by the company have been working with the city's engineers on the design. The hope is to redevelop Fiesta Square, with new buildings constructed and traffic flow in and out of the shopping center improved, he said.

"In general, we're excited about the prospect of bringing some of the traffic off North College and funneling it through the shopping center with new city streets and the connectivity that brings to the whole medical and uptown area," Thurman said.

Emily Rose lives south of Appleby Road. She said she understands the need for street connections through the shopping center. The center essentially functions as a cut-through anyway, just without clear delineations for traffic, she said.

However, the placement of the roundabout doesn't make sense to her, Rose said. It seems putting the roundabout at the intersection on College Avenue would move cars more effectively, with perhaps a four-way stop in the shopping center where the roundabout is planned, she said.

"I can't visualize how this is going to solve backup on College," Rose said.

Council Member Sarah Bunch, who represents the northeast part of town on the Transportation Committee, said she thinks people will use the new connection quite a bit, especially drivers from Millsap Road trying to avoid College Avenue. Having more order to the traffic flow within the shopping center also should prevent cars from going all over the place, like they do now, she said.

"I think it's going to be a great improvement," Bunch said. "It's maybe not perfect, but I really like it a lot."

To see drawings of the proposed roundabout, click here: nwaonline.com/110round/

For more information on the planned connection through Fiesta Square, go to: