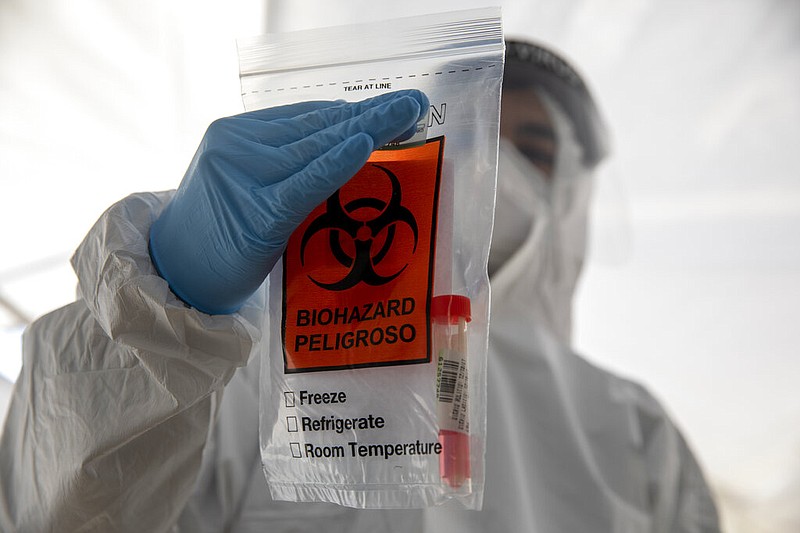 A health care professional holds a covid-19 test sample in a bag at a testing center in Jerusalem on Sunday, Jan. 10, 2021.

The number of Arkansas covid-19 patients on a ventilator increased to 237 on Sunday, breaking the record of 224 set just last week, according to numbers from the Arkansas Department of Health.

Arkansas also reported 3,330 new covid-19 cases on Sunday, Gov. Asa Hutchinson announced, though he said that a significant portion of those cases were delayed reports of earlier infections.

"These results are higher than last Sunday, but over 2,000 of the new cases are from late reporting of cases from months ago," Hutchinson wrote on Twitter. "Regardless, they reflect how this virus impacts all of us."

Hospitalizations, which have hovered at a record level for several days, dropped slightly, even as ventilator use went up by 14 from Saturday. The state's tally declined by six, to 1,340, according to the state Health Department.

Thirty-three additional deaths, 25 of them listed as confirmed and eight as probable, raised the state's tally of the death toll to 4,043.

The cumulative number of infections in Arkansas since the start of the pandemic exceeded 255,000 with the new cases reported on Sunday. More than 233,000 of those are considered recovered.

On the covid-19 immunization front, 3,191 doses were administered since Saturday through the state's first-phase program, as well as 492 doses through a federal program targeting long-term care facilities.

So far, the state of Arkansas has given 38.3% of the doses contained in its vaccine stock, according to the Health Department.