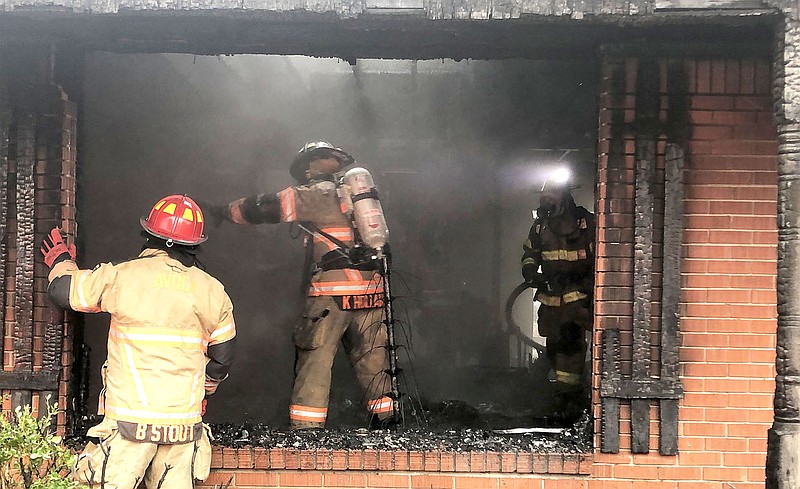 PEA RIDGE -- Police arrested a man in connection with the violation of a protection order shortly after he was pulled from a house fire Saturday.

Jon Biffany Jr., 43, was being held Monday in the Benton County jail with no bail set.

Tyler Thompson and his wife saw smoke rising from a nearby house on Hoffman Street about 3 p.m. Saturday.

"Me and my wife were home when all of a sudden she said, 'Honey, call the fire department,'" Thompson said. "I jumped up and ran to the window and seen this God-awful fire and took off running out the back door to the house."

Thompson said he ran to the front yard of the house, gathering rocks to use to break a window when he heard "whining and wheezing" and realized someone was in the house. He broke open the window and helped Biffany out.

"I flipped him over on his back and did CPR," Thompson said.

Then he yelled for help and neighbors helped him get the man over a fence and away from the house, he said.

Thompson, who works with a nonprofit organization Speak Up About Drugs, said he was not frightened even though he doesn't have special training in emergency services.

Biffany was treated for smoke inhalation at the scene. An electrical issue in the attic caused the fire, which officials determined was accidental, according to police Lt. Michael Lisenbee.

Biffany's wife, Alison Biffany, filed for the order of protection Dec. 10. A temporary order prohibiting Jon Biffany from having contact with his wife was granted. A hearing on the order is scheduled for Thursday in Benton County Circuit Judge Christine Horwart's court.

Alison Biffany filed for divorce from her husband in Benton County Circuit Court on Monday.