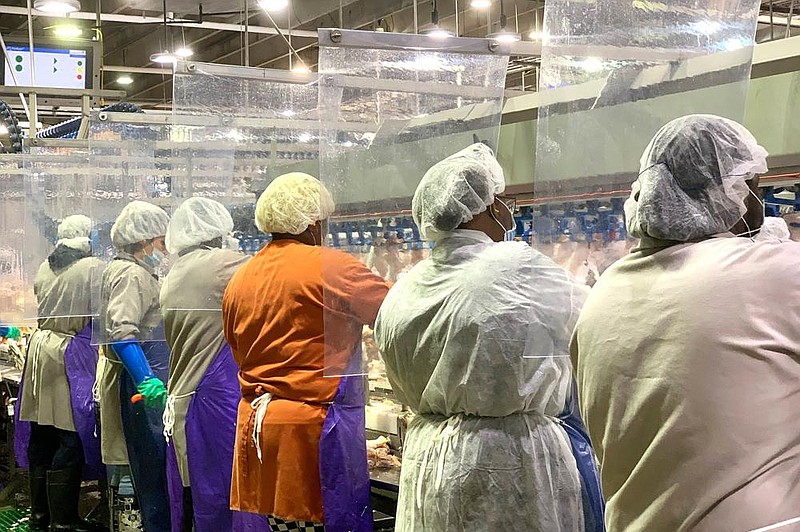 The Trump administration is working to finalize a rule that would allow poultry plants to increase slaughter speeds, an action that correlates with an increase in coronavirus infections, according to a recent study.

Days after President Donald Trump lost his bid for reelection, the U.S. Department of Agriculture sent a proposed regulation to the White House's Office of Management and Budget that would allow all poultry plants to increase line speeds. Officials are holding meetings with proponents and critics before the proposal is made available for public comment.

The administration allowed 15 poultry plants to increase slaughter speeds during the pandemic, all of which had reports of severe injuries or a history of federal labor violations. More than half of the locations reported a covid-19 outbreak before the end of June, including those owned and operated by Tyson Foods and George's Inc.

"There's no doubt that increasing line speeds will increase infection rates during covid," said Debbie Berkowitz, a former senior official with the Occupational Safety and Health Administration. At a time when health officials are encouraging plants to slow their line speeds and maintain social-distancing, she said workers are struggling to be more than 2 feet apart in most cases.

In 2018, the USDA began accepting applications from poultry plants to operate faster than the federal limit. The administration has issued waivers to 54 facilities, allowing these plants to speed up lines from 140 to 175 birds per minute, a 25% increase.

"The poultry workers are totally terrified, and this is really bad for communities," said Berkowitz, worker health and safety program director for the National Employment Law Project.

A study published in the Proceedings of the National Academy of Sciences of the United States of America last month found that counties with poultry plants that received line speed waivers have double the rate of covid-19 cases compared with counties with plants without waivers. Researchers found a stronger connection with processing plants that received waivers last year.

"This finding suggests a potential pathway between a livestock plant's operating procedures and covid-19 transmission," the study's authors wrote.

In the U.S., at least 51,688 meatpacking workers have tested positive for the coronavirus and 263 have died as a result, according to data from the nonprofit Food and Environment Reporting Network. In Arkansas, 52 covid-19 outbreaks have been recorded in processing plants during the pandemic, resulting in 6,201 positive cases among meatpacking workers and 22 deaths.

Industry advocates say they are doing all they can to ensure the health and safety of their workers. Chicken companies have invested hundreds of millions of dollars in worker protections, including Plexiglas barriers and temperature scanners. Lately, the industry pushed for priority vaccine access for front-line poultry workers.

The National Chicken Council, a proponent of increased line speeds, explained in an infographic how most of the talk about processing speeds refers to the "evisceration line," a highly automated part where the organs are removed and where only 2% of the plant's employees work. After that comes "second processing," where the product is cut up and packaged, and where the line operates 40% slower than the other line.

Over the past 25 years, as the USDA allowed companies to increase production line speeds, the poultry industry's injury and illness rate has fallen 86%, according to data from the Labor Department.

Tom Super, a spokesman for the National Chicken Council, said in an email Monday that the line speed rule "might be the most deliberative and studied proposed rule that has ever been issued by the USDA."

Critics are skeptical of the data available to support a widespread line speed increase. In a Dec. 10 meeting, USDA officials said that 16 poultry plants may have run one line at about 175 birds per minute for a year.

"They don't have the data they need to do this," Berkowitz said.

In addition to increased line speeds, the rule would assign certain inspection duties to company workers, reducing the number of federal inspectors in the plants.

Magaly Licolli, one of the founders of poultry worker advocacy group Venceremos in Springdale, said workers in the deboning section already work shoulder-to-shoulder to keep up with production.

"When the chicken goes faster, it's even more impossible," she said.

Most processing plant workers are people of color who speak little to no English. Increasing the line speeds, which also increases the risk of physical injury and catching the coronavirus, is "really an attack to these workers," Licolli said.

"At that speed, it's impossible to check the quality of the meat," Licolli said.