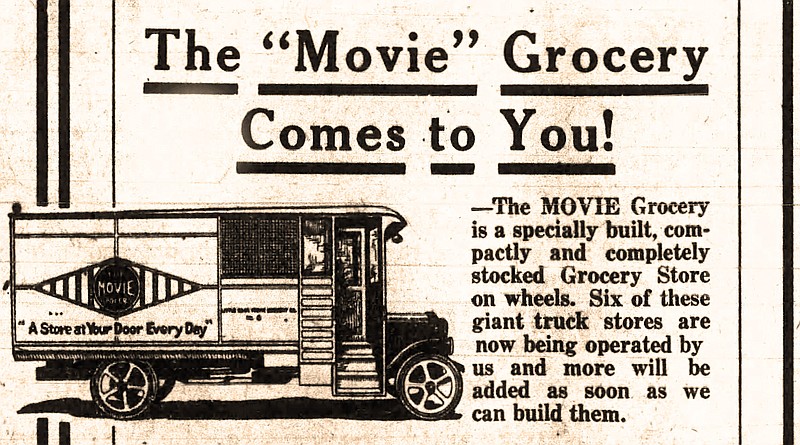 One hundred years ago, a group of businessmen in Little Rock tried out a trendy, big-city idea for selling fresh produce, flour and meat: grocery stores on wheels.

These were not like truck stands or food trucks. The traveling stores drove daily routes into neighborhoods. They would stop right in front of houses. Shoppers climbed aboard to make their selections from a broad variety of goods, and each truck carried a refrigerator (no doubt an ice-box type) and electric lighting.

On May 22, 1920, the Arkansas Democrat reported the birth of two corporations: the Little Rock Movie Grocery Co., capitalized at $75,000, and the National Movie Grocery Co., with $30,000 in capital and the patent for the Moseley Movie Grocery car. (The diagrams submitted with U.S. patent 1333670A are online: See what the "car" looked like inside at arkansasonline.com/14patent.)

Created by Everett E. Moseley of Pine Bluff, the car was a truck fitted inside with shelves and bins to display foodstuffs — including live chickens. The Democrat reported that it was 22 feet long, 7 ½ feet wide and 10 feet, 10 inches from ground to roof. The paper added:

The interior was mahogany and white enamel. The exterior was described in May as battleship gray, but when the trucks appeared in Little Rock in September, they were orange.

Shares in the company cost $100 apiece, and each officer subscribed to buy 50 shares. Descendants might recognize the names of the incorporators: O.W. McCaskill, president; Moseley, vice president; J.A. Sherill, secretary and treasurer; W.L. Pendergrass, E.A. McCaskill and Hugh D. Hart. (Dear Descendants, can you tell us more about this business?)

On May 23, the Arkansas Gazette reported that the S.R. Thomas Auto Co. had a contract for the immediate delivery of six two-ton Indiana motor trucks to the Movie Grocery Co.

The Democrat reported Aug. 18 that a warehouse and motor shed were almost ready at 16th and Jones streets in Little Rock, on the Rock Island railroad right of way; and the first store on wheels was to roll out no later than Sept. 1. But the Gazette reported Sept. 5, a Sunday, that the first truck was expected to roll out that coming Wednesday, and head straight for Pulaski Heights.

The Gazette also described the warehouse as a frame structure 40 by 60 feet, built by local contractor W.W. Brown. The site is easy to find, and a landmark, Quigley Stadium, stands nearby today. But don't expect to see the old warehouse. Why not will soon be evident.

An advertising blitz in November added details about these trucks:

◼️ Each would stop in front of people's houses at practically the same time every day.

◼️ Buying a $5 book of coupons in different denominations allowed shoppers to buy goods when they had no cash on hand, without paying the markup for credit charged at stationary grocery stores — which also charged delivery fees. Another benefit of using coupons was sending a servant to do the shopping, the ads suggested. (Maybe people didn't trust that their servants could do math and wouldn't be cheated?)

◼️ The business was a roaring success, with hundreds of people buying coupon books.

The last of these happy ads appeared Jan. 5, 1921. Then came Jan. 7, a Friday. The Democrat reported that afternoon that the warehouse and garage had gone up in smoke overnight, a loss estimated at $75,000 and only partly insured. The fire was advanced when a crew from the No. 5 station (1401 Pulaski St.) arrived at 2:30 a.m.:

The disaster had actually been the second fire alarm in the building. The first alarm, at 8 p.m. the same night, was a small blaze in the warehouse, easily extinguished.

Company officers said that they intended to continue in business, that they would rebuild on the same site, and that a temporary office would be at the Lesser-Goldman Cotton Co. building at Second and Cumberland streets. Ads in January invited customers to present their unused coupons for a cash refund. But "as our truck stores are built to order and are exceedingly intricate in construction, it will be some time before we can resume operation."

I have not found any further mentions of the Little Rock company in the archives, but the idea lived on.

On Jan. 13, 1921, the Democrat reported that a customer in Stuttgart broke her hip while descending the steps of a wagon being operated as a movie grocery: "The same limb was injured in an accident several years ago and left her a cripple for life."

In March, a newcomer to Little Rock was jailed for defrauding sugar dealers and wholesalers by passing bad checks; he told police he was trying to raise funds to start a movie grocery.

In October 1921, Jack Newton, a graduate of Camden High School, announced he had started a movie grocery. In 1922 at Bald Knob, Moore Bros. mercantile announced that it would send its movie grocery "wagons" to strawberry fields to serve laborers.

Helpful Reader sent me a gentle correction after reading my Dec. 28 column. It was about Charles Conway, a Black resident of Little Rock whose adventures 100 years ago befuddled and apparently embarrassed white-owned newspapers. Helpful Reader was appalled that I used two phrases he has heard employed as racist puns.

Helpful Reader is 80 years old. He explained that the meanings of "the jig is up" and "in spades" are not limited to what I knew of them from country dance and card-playing. In the context of a story about a Black man, they were confusing.

My ignorance of that fact does not stop them from possibly causing offense.

I am thankful to have been told this, and so graciously.

My friends, we have survived the longest night of 2020, and from here on the days lengthen, increasing our opportunities to do more work. Now, today, is the right time to study our mistakes. Thank you, Helpful Readers, for every correction and objection you have sent me this past year. I am grateful for the opportunities you give me to become less clueless and careless.

Thanks also to my gifted page designer, Stan Denman, and day news editor Joe Riddle, who saved me from myself countless times in 2020. Hanna Clark, as a page designer and copy editor, has been a faithful helper, too. Their work in this Style section is seldom credited but always crucial. I am proud to work with such good people.

Onward, my friends. Everything old is new again.