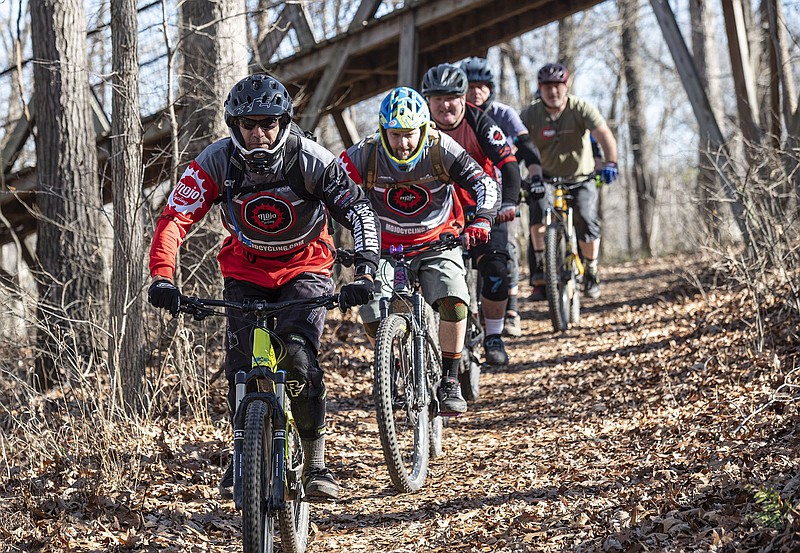 BENTONVILLE -- Mountain biking is not for the faint-of-heart. There are spills that sometimes claim inches of elbow and knee skin, winding downhill twists and turns that can take your breath away and rolling jumps that can literally bring both wheels off the ground.

For a group of middle-aged men in Bentonville, those are just part of the attraction that brought these senior shredders to the dirt trails that span miles of Northwest Arkansas terrain.

"My wife and I moved here and we saw all these trails being built," said Rusty Cramer. "I tried it out and I've been addicted ever since."

On a warm December day, Cramer was part of a group of six riders who jokingly call themselves Team Low-T.

Dave Neal, 57, who owns Mojo Cycling in Bentonville, had a Facebook post a few weeks ago about the group that comically laid out the rules for being a Team Low T member.

"Who says you have to quit having fun when you get old?" wrote Neal. "Obviously we don't! That's right, if you're 49.5 years old (or more) and you have a self-deprecating sense of humor, you can join in. Team Low-T is (mostly) a bunch of old guys who still like to blast the trails ... now on e-bikes."

On this day, Team Low-T was bouncing up and down the trails at the Coler Mountain Biking Preserve in Bentonville.

Cramer, 50, is the youngster in the group, whose ages range from his youthful 50 to 61.

Randy Johnson, 60, was an avid road biker in Little Rock before moving to Northwest Arkansas about 12 years ago. The single-track dirt trails were a bigger attraction than the pavement, so Johnson made the switch to mountain biking.

"Mountain biking is like skiing on dirt," said Johnson. "That is the best way to describe it. It's the same feeling as skiing, but you are on a bike."

Of the six riders in the Low-T group, five have made the switch to electric bikes, or e-bikes. E-bikes use an electric motor to assist with the pedaling. Riders still have to pedal the bike, but the electric motor provides a boost with a rechargeable battery-operated motor.

Neal said e-bike sales have soared in the past few years as more older riders have returned to their first mode of transportation when they were youngsters.

"Originally people were kind of ambivalent about e-bikes," Neal said. "A lot of people still think it's cheating. But everything is not a race. There are different reasons for getting into e-bikes. We're getting a little bit older. Like me, I ran into some health issues. If it weren't for e-bikes, I probably could not ride at all. For me, it's a saving grace."

Neal said costs vary from $4-5 thousand for a high-level e-bike.

For Stephen Byrne, 57, the decision to jump on an e-bike was more personal.

"I just remember that I was struggling to ride with my kids and them telling me, 'daddy, you suck,'" said Byrne with a laugh. "That was the day I decided to get an e-bike. I was tired of listening to that. I still can't keep up with them, but now at least I'm within a certain distance.

"Riding just wasn't enjoyable before. It was just tough with age. With the e-bike, it's kept me on the bike and hopefully, it will keep me on for the next 10 years."

At 61, Young is the elder statesman of the Low-T group, and he's also the only rider who has not made the switch to an e-bike.

"I honestly have thought about it," he said. "They have really opened mountain biking up for people our age. I like them and if someday I need to get one, I'll get one. I love the sport. I moved back to Bentonville to be a part of the growing culture of biking here and it's a wonderful place to live."

Finding a tribe of riders was important to Tom Miller, 55. He said he felt a kinship with the Low-T group, which meets once a week at the various biking trails in the region. On this day, they were tearing up the Coler trails, but they have shredded the trails like Bella Vista's Back 40 and Little Sugar as well.

"There's just a lot of camaraderie among the mountain biking community," Miller said. "You find a lot more mountain bikers laughing and high-fiving each other. Like when someone gets air. We're like, 'man, did you see that. How much air did they catch!'

"It's just a whole lot more fun. We're just all good friends. It's just fun to get out and ride together, especially since we're all about the same age."

Good-natured teasing and a competitive spirit are quite obvious with this group. Even the group name is a subtle shot at their collective age. But having fun is their main objective.

Asked if they have a fear of falling or getting injured, they all agreed that was part of the thrill of the ride.

"It's there every day, every time I ride," Johnson said. "But I've never hurt anything bad except my pride."

What is an electric bike?

E-bikes use rechargeable batteries that can travel up to 25 to 45 km/h, much faster than most people would cycle.

The cost of a high-end e-bike can range from $4 thousand and up depending on the brand and the type of bike.