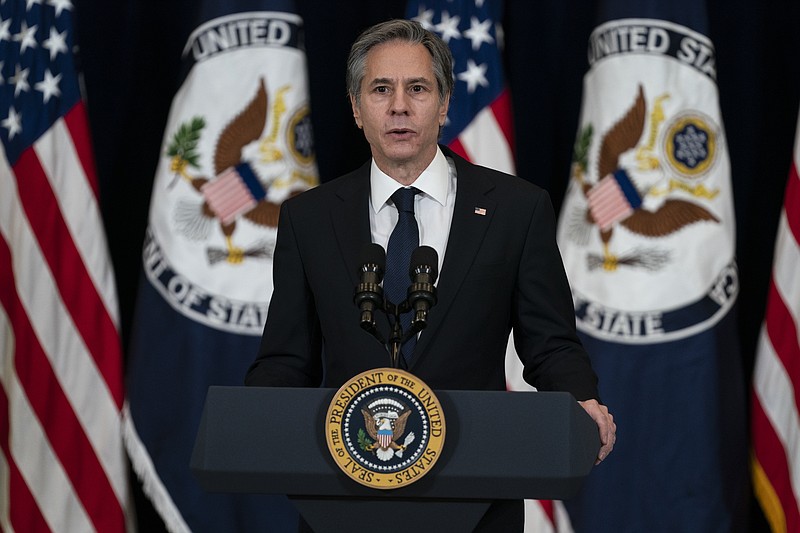 In this Feb. 4, 2021, photo, Secretary of State Antony Blinken speaks at the State Department in Washington. The Biden administration on Feb. 18 rescinded former president Donald Trump’s restoration of U.N. sanctions on Iran, an announcement that could help Washington move toward rejoining the 2015 nuclear agreement aimed at reining in the Islamic Republic’s nuclear program. (AP Photo/Evan Vucci)

WASHINGTON -- The Biden administration says it's ready to join talks with Iran and world powers to discuss a return to the 2015 nuclear deal, in a sharp repudiation of former President Donald Trump's "maximum pressure campaign" that sought to isolate the Islamic Republic.

The administration also took two steps at the United Nations aimed at restoring policy to what it was before Trump withdrew from the deal in 2018. The combined actions were immediately criticized by Iran hawks and drew concern from Israel, which said it was committed to keeping Iran from acquiring nuclear weapons.

Besides signaling Thursday a willingness to talk with Iran, the administration also reversed Trump's determination that all U.N. sanctions against Iran had been restored. And it eased stringent restrictions on the domestic travel of Iranian diplomats posted to the United Nations.

The State Department announced the moves after discussions between Secretary of State Antony Blinken and his British, French and German counterparts and as Biden prepares to participate, albeit virtually, in his first major international events with world leaders.

In a statement, State Department spokesman Ned Price said the U.S. would accept an invitation from the European Union to attend a meeting of the participants -- the five permanent members of the U.N. Security Council and Germany, along with Iran -- in the original nuclear agreement.

"The United States would accept an invitation from the European Union High Representative to attend a meeting of the P5+1 and Iran to discuss a diplomatic way forward on Iran's nuclear program," he said. The U.S. has not participated in a meeting of those participants since Trump withdrew from the deal and began steadily ramping up sanctions on Iran.

Such an invitation has not yet been issued but one is expected shortly, after Blinken talks with the British, French and German foreign ministers.

In Iran, Foreign Minister Mohammad Javad Zarif said Friday that the Biden administration action meant that the U.S. had acknowledged moves made under Trump "had no legal validity."

"We agree," he added, urging the Biden administration to lift U.S. sanctions "imposed, reimposed or relabeled by Trump. We will then immediately reverse all remedial measures."

In Israel, Prime Minister Benjamin Netanyahu's office expressed worry, saying it believes that "going back to the old agreement will pave Iran's path to a nuclear arsenal." It said in a statement Friday that it remains "committed to preventing Iran from getting nuclear weapons" and was in close contact with the United States on the matter.

Saudi and Emirati officials were silent Friday. Watching the Biden administration's outreach to Tehran with resignation, the two Gulf states -- which were angry at being excluded from the last round of negotiations -- can only hope that the United States will keep its promises to consider Gulf interests in the talks, analysts said.

"We just have to trust the new administration," said Abdulkhaleq Abdulla, an Emirati political scientist. "We don't have any option. They really are determined to reach out to Iran, so there's no way that anybody could stop them."

But he acknowledged there could be something to gain, saying, "If the end result is less confrontation with Iran, a less aggressive Iran, a less expansionist Iran, it's a dream of a sort."

At the United Nations, the Biden administration notified the Security Council that it had withdrawn Trump's September invocation of the so-called snapback mechanism under which it maintained that all U.N sanctions against Iran had been reimposed. Those sanctions included a conventional arms embargo against Iran that had been set to expire.

Iran said the U.S. must first return to the 2015 nuclear deal and lift sanctions if it wants talks with the Islamic Republic.

Iran is set next week to restrict snap international inspections of its nuclear sites, a significant hardening of its stance in the face of punishing U.S. penalties that threatens to make concessions by either side more difficult.

Information for this article was contributed by Matthew Lee, Edith M. Lederer, Geir Moulson, Angela Charlton and Masha Macpherson of The Associated Press; by Golnar Motevalli, Yasna Haghdoost and Patrick Sykes of Bloomberg News; and by Patrick Kingsley and Vivian Yee of The New York Times.