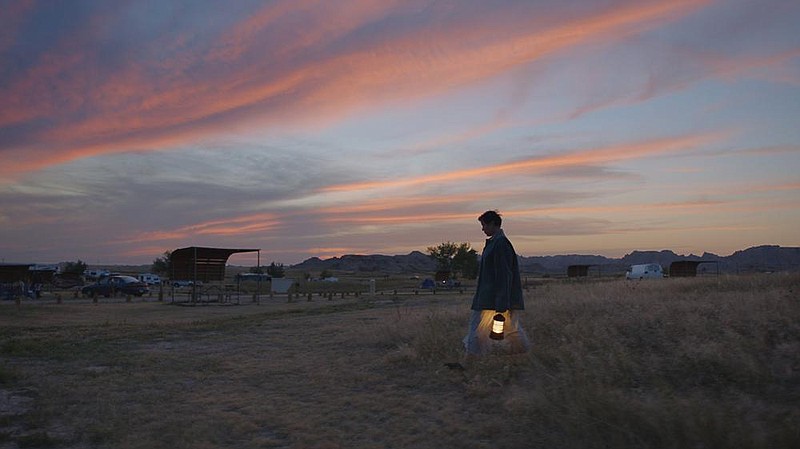 The realities of economic Darwinism play out under painted skies and across wide open spaces in Chloé Zhao’s matter-of-fact portrait of the “vandwelling” subculture “Nomadland.”

We went to the RV show at the Statehouse Convention Center last weekend to look at the fantasy wagons.

We have talked, my wife and I, about someday buying a small but luxe vehicle -- maybe a customized Mercedes Sprinter -- to drive off in after the imminent fall of civilization. We walked around, masked and patient; pandemic protocols allowed for only one group in each unit at a time. We talked as though we were genuinely interested, comparing specs and commenting on the difference in quality between models, but we knew we weren't. Our lives seem too complicated to fit into a motor home right now.

It's just a joke between us. The American imperative is, as Huck Finn put it, "to light out for the territory." Someday, out of necessity or disgust, we might have to.

People do it. In Emily St. John Mandel's 2020 novel "The Glass Hotel," a retired former corporate executive named Leon, his savings drained by a Bernie Madoff-esque Ponzi scheme, takes to the road with his wife in a battered RV:

"Leon knew that he and [his wife] were luckier than most citizens of the shadow country, they had each other and the RV and enough money (just barely) to survive, but the essential marker of citizenship was the same for everyone: they'd all been cut loose, they'd slipped beneath the surface of the United States, they were adrift."

Chloe Zhao's "Nomadland" considers the lifestyle of these modern sojourners, a mostly invisible class of people who live on the road in vans and campers they park in RV campgrounds and box store lots while they work seasonal jobs in tourist towns and Amazon warehouses and distribution centers. It is a lifestyle born of economic desperation -- most of these people have decided it is their best option -- but is also romantic. And not just for us wistful onlookers.

Fern (Frances McDormand) had a nice enough life. A modest ranch house, a husband, a steady trickle of income. But she lost it when her husband died and the gypsum plant that sustained her little town of Empire, Nev., closed. Within six months the town was dead, its ZIP code revoked. She was homeless, or, as she prefers to put it, "houseless."

So she counted her money and bought an old white van, outfitted it with a hot plate and a mattress and struck out on the road, criss-crossing the American West on a more or less circumscribed schedule. She follows the work, and with it a hardy band of similarly disposed folks. She doesn't have plumbing, but she has the wide night sky. She named her van, because that is what you do in the nomadic subculture she discovered. She calls her Vanguard, which means the tip of the spear.

The ones that are walking point, the foremost part of an advancing army.

Which indicates that she's one of the first into a brave new world, though there were others before her. A lot of the people in "Nomadland" aren't actors and aren't pretending to be anyone other than themselves. Zhao and McDormand immersed themselves in their reality to tell a fictional story, similar to the way Zhao had real people play lightly altered versions of themselves in her 2017 film "The Rider."

That's not to say they aren't acting, because they are playing along with the idea that McDormand is actually a poor widow named Fern who lives out of her van, but their characters are the characters they present in their non-cinematic lives. Linda May, Bob Wells, Charlene Swankie and others are actual "van-dwellers" and the stories they tell are their own. Swankie's cancer and May's suicidal ideations are real.

This lends the film poignancy, especially as these characters' stories get told elliptically, in glances and asides, and we begin to suspect that some of the bravado they exhibit is a kind of armor. They will tell you they don't miss possessions or rootedness, that it is a liberating choice to live as they do, and we sense that they sometimes believe it.

But while the real people who populate "Nomadland" -- based partly on Jessica Bruder's 2017 nonfiction book "Nomadland: Surviving America in the Twenty-First Century" in which she interviewed many of the motorized transients who appear as themselves in the film -- Fern is the heart and core of the story. She's a tough cookie, a 60-something who is too proud to lean (too heavily) on her well-off sister Dolly (Melissa Smith), who lives in a pleasant suburb near a big city back east.

"You left home as soon as you could," Dolly remembers, indicating a restless streak in Fern that pre-dated the Empire disasters.

Even as Fern interacts with the her fellow travelers, you get the feeling she's more comfortable alone. When she draws the attention of Dave (David Strathairn), an appropriately aged gentleman who has somehow screwed up his upper-middle-class life and ended up on the circuit, she allows him only so close. Dave would like something like a relationship, but Fern seems to have put those things behind her.

She tries with Dave, however. She sees him when their orbits intersect. And when he is invited to his son's home to celebrate the birth of a grandchild, he invites her to drop by, which she does -- for a couple of hours. We get the feeling this is not the first time she has slunk away in the middle of the night. It's as though she's allergic to the snug harbor of family.

(Dave's son is played by his real-life son, Tay Strathairn, best known for having been the keyboard player in the band Dawes, though he also played his father's son in 1996's "Lone Star"and 1988's "Eight Men Out." He's fine in the role, and the family resemblance adds to the sometimes uncanny verisimilitude of Zhao's film.)

A Western without horses or violence (though we never cease to fear for Fern, who is as vulnerable as she is fierce),"Nomadland" is one of those rare films that trusts the audience to see the poetry in an ordinary woman living an unorthodox but ordinary life. It trusts us to divine the courage in Fern.

It also refrains from lecturing anyone about the conditions that produce such a makeshift culture -- the "shadow country" that Leon talks about in "The Glass Hotel." We have embraced a ruthless capitalism that divides us into winners and losers, but the losers can still have rolling bedrooms and dignity. Fern would not characterize herself as a loser, she doesn't need redemption or to be saved. She's alive -- more alive than many -- and she knows it.

Not all who wander are lost, the saying goes.

McDormand role as Fern is perfect, empathetic yet a little brittle, a little grief-scarred but mostly wanting to just get on with things. She's complex but not enigmatic, she mightn't be able to explain what drives her but she knows her mind. She's pragmatic and smart as "Fargo's" Marge Gunderson, and brave in the way human beings can be when they want everyone to think that they're OK.

In this remarkably naturalistic movie, there is a moment of bracing drama. Fern runs into a young man she has met before, a tramp named Derek (Derek Endres) who asks her for a cigarette, and he tells her a little about himself. And she blesses him, reciting from memory Shakespeare's Sonnet 18 (the one that begins "Shall I compare thee to a summer's day?").

The scene is riveting, beautifully filmed in the magic-hour dusk of the desert (cinematographer Joshua James Richards, an Englishman who also worked with Zhao on her previous films, deserves whatever awards come his way) and it is also just barely plausible, given Fern's history as a substitute school teacher.

It is an indelible moment in an indelible film that, perhaps more than any other, speaks to the viral anxiety of our time.

Rating: R, for language and nudity 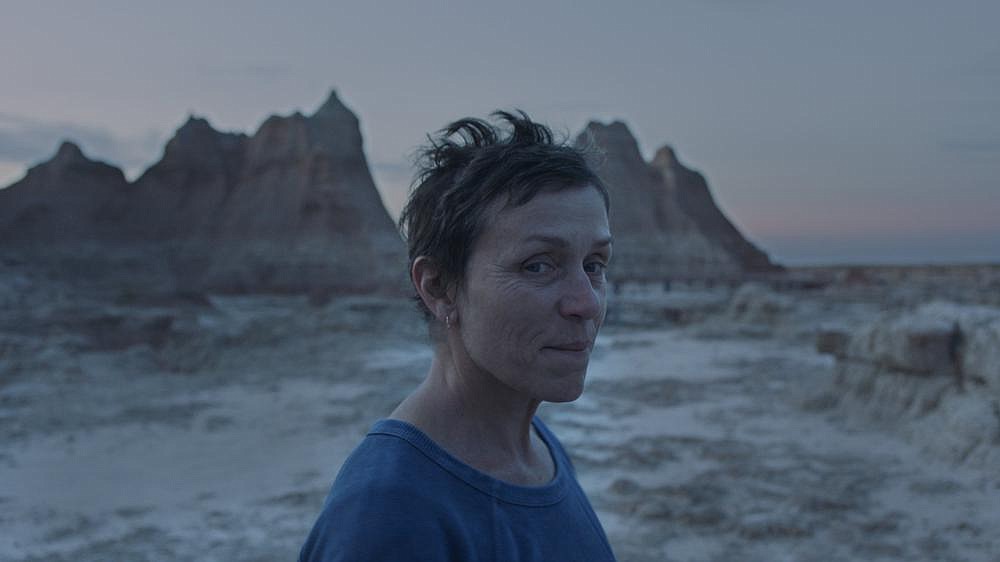 Fern (Frances McDormand) is a 60-year-old woman driven by loss and grief to wander the American West in “Nomadland,” a film that captures the viral anxiety of the present moment.

After her husband and her town died, Fern (Frances McDormand) packed everything she owned into “Vanguard” and hit the road. Chloé Zhao’s “Nomadland” tells her story (and others).
ADVERTISEMENT