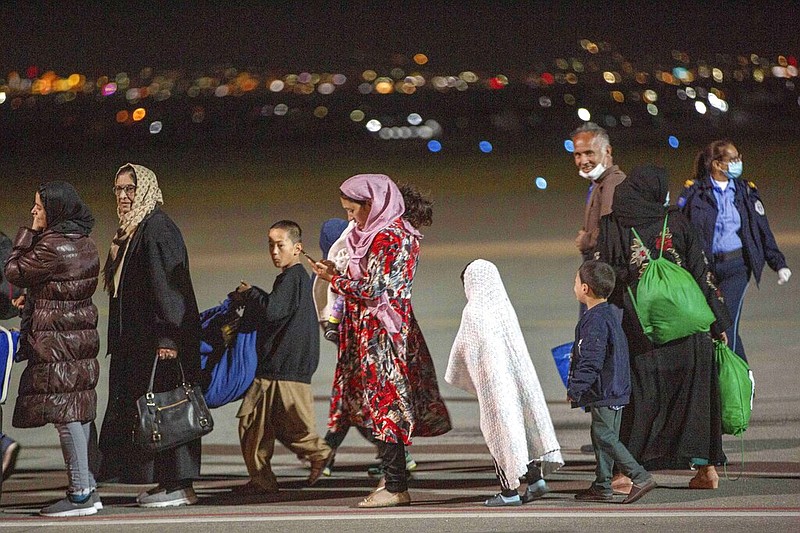 Families evacuated from Kabul, Afghanistan, walk at the international airport in Pristina, the capital of Kosovo, on Sunday, Aug. 29, 2021. The Afghans came from the Ramstein military base in Germany, and they will be housed near the U.S. military Camp Bondsteel, 25 miles south of the capital Pristina. (AP/Visar Kryeziu)

FAYETTEVILLE — A group founded by a Washington County deputy prosecutor is helping to relocate 5,000 Afghan refugees with 1,500 children among them, including about 400 orphans.

Refugees are a windfall of potential victims for human traffickers, Metcalf said. He happened to know members of U.S. special forces in Kabul who had worked with Afghans. They called him asking for his help to keep refugees safe, he said.

Two members of his group went to Kabul, Afghanistan’s capital, to help make sure the refugees were evacuated to somewhere safe, Metcalf said. They have returned. Stateside, the task force is one of many U.S.-based groups helping in the crisis on a voluntary basis, coordinating with both U.S. and foreign governments.

“People were handing their babies over the walls and the gates,” Metcalf said of the evacuation from Kabul. Not only Afghans who had helped Americans and were in danger wanted their children out, he said.

The Taliban has a long, well-documented history of both allowing and committing abuse, he said. Orphans in particular are vulnerable to exploitation ranging from child labor to sexual abuse, he said, since they have no families to protect them.

“An exploited child in the United States can at least have hope that someday someone in authority will find out and do something,” he said. “A child whose own government exploits them doesn’t even have that.”

The Wall Street Journal reported earlier this month “Taliban commanders have demanded that communities turn over unmarried women to become ‘wives’ for their fighters.” Taliban spokesman Zabiullah Mujahid denied these most recent reports, despite the Taliban’s history of such abuses when it ruled the country.

The task force helped arrange evacuations for the 5,000, with most going to Abu Dhabi, the capital of the United Arab Emirates.

“I’m incredibly impressed with the Emirates,” Metcalf said. The government and its people have been extremely generous and welcoming. They are not able to offer permanent accommodations, he said. The apartments occupied by refugees now are needed by still more refugees in transit from Afghanistan.

So now his group is working with U.S. armed services veterans and others to find permanent homes for the 5,000 refugees they assisted, hopefully near or within Afghan American communities.

Canopy Northwest Arkansas, a refugee resettlement agency in Fayetteville, could begin receiving refugees as early as this week, the nonprofit’s leadership said recently. The organization assists refugees with finding housing, work and other basic necessities.