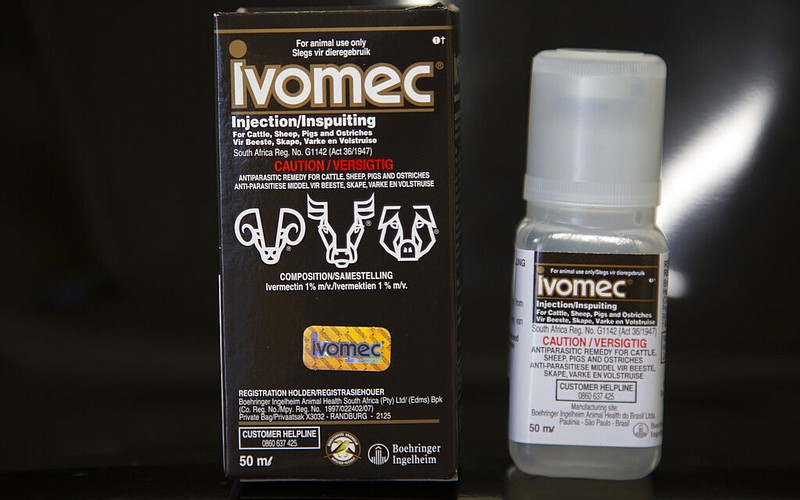 The packaging and a container of veterinary ivermectin is seen in Johannesburg, South Africa, in this Jan. 29, 2021, file photo. (AP/Denis Farrell)

The Arkansas Poison Center has received two dozen phone calls so far this year from people who have ingested Ivermectin, nearly as many as in the previous four years combined, according to officials.

Of the 24 people who called the center, one adult ingested the drug formulated for livestock by accident, and 23 adults ingested it as a treatment for covid-19, according to Dr. Howell Foster, director of the center, based at the University of Arkansas for Medical Sciences.

By comparison, the center received 25 calls over the previous four years combined from adults who accidentally ingested the drug, mostly related to farm use, he said.

For human use, a tablet form of the medication, available by prescription, is approved only to treat people with specific intestinal worms, and topical forms are approved to treat people with external parasites, such as head lice, or for skin conditions such as rosacea, according to the federal Food and Drug Administration.

Other forms of Ivermectin are used in animals to prevent heartworm disease, and certain internal and external parasites, the FDA website states.

The medication gained a lot of attention last week when some people began using the livestock form as a covid-19 treatment. A Fayetteville doctor used the drug to treat prisoners in the Washington County jail, and several state politicians took to social media to comment about the drug.

Reports of its usage prompted the FDA to issue a warning advising people against it as a covid-19 treatment.

Foster said he suspects that Ivermectin calls to the poison center are only a fraction of the number of people who have suffered side effects from using the veterinary formulations of Ivermectin.

Many people who called the center experienced gastrointestinal issues, Foster said. Some were hospitalized after experiencing neurological issues, such as tics or tremors, he said. Although none of the patients' symptoms escalated to seizures, it is a potential side effect of the drug, he said.

Since the people who called were either suspected of having covid-19 or covid-positive, Foster said it's hard to tell if the symptoms were related to the disease or the drug.

"The biggest takeaway is that veterinary products are not formulated for humans. They are at really high concentrations because we are giving them to really big animals, and you need to be really careful with that," Foster said.

The state poison center hasn't seen an increase in pediatric cases of Ivermectin ingestion this year as compared with previous years, and hasn't had any cases of children ingesting Ivermectin as a covid-19 treatment, Howell said.

It's important to note, the FDA website says, that Ivermectin for livestock is different from the formulations for people and is safe when used as prescribed for animals only, the website states.

The idea that Ivermectin could help treat the coronavirus stemmed from a lab-based study, done in-vitro, or in a laboratory dish, that found that extremely high doses of Ivermectin did inhibit the covid-19 virus from replicating, according to Dr. Marti Sharkey, Fayetteville's public health officer.

But the high dosage in a human would kill the person before it would do anything to covid-19, and the study has not been replicated, she said.

All in-person studies failed to show any efficacy, she said. One study out of Egypt showed promise but has since been retracted because of problems with the data set and questions about data falsification, she said. Research on the subject is ongoing, she said.

Before the covid-19 pandemic, it was suspected that Ivermectin might have some antiviral properties, said Foster, who also mentioned the lab study. Some studies show Ivermectin treatment may have a good outcome, but there was also at least one study that showed it made no difference.

The FDA warned against using Ivermectin to treat covid-19 in an Aug. 21 post on Twitter that said, "You are not a horse. You are not a cow. Seriously, y'all. Stop it."

There are several dangers in using the veterinary formula of Ivermectin to treat humans, Foster said.

It takes five or six adult people to equal the size of one adult horse, he said.

High doses of Ivermectin, like those used to treat cattle and horses, are potentially lethal to humans, Sharkey said. In addition, Ivermectin interacts with other medications, particularly blood thinners, so there are a lot of potential risks, she said.

An overdose of Ivermectin can cause nausea, throwing up, diarrhea, low blood pressure, allergic reactions such as itching and hives, dizziness, problems with balance, seizures, coma and even death, according to the FDA website.

"We have a vaccine that is FDA approved that prevents serious illness and death, and monoclonal antibodies have been approved by the FDA for emergency use, decreasing the need for hospitalization for those with a high risk of complications," Sharkey said of the approved covid-19 vaccines. "We have tools that we know work. I do not understand why you would turn to a therapy that is not approved by the FDA, is unproven against covid-19 and potentially lethal."

Matthew Crabtree, CEO of Farmers Coop, which has 18 locations in Northwest Arkansas, the River Valley and northeast Oklahoma, said stores were having trouble keeping the livestock form of Ivermectin in stock even before the pandemic. Claims over the internet that the livestock formulation can treat covid-19 have exacerbated that shortage, he said.

Stores now have put up signs and flyers warning against using the livestock medication in humans, and have told employees not to answer questions about dosing and not to sell the product to people they suspect plan to use it for themselves, he said.

The American Civil Liberties Union criticized the use of Ivermectin in the lockup as "medical experimentation" and an "unapproved treatment" for covid-19. However, Karas and Washington County Sheriff Tim Helder say that inmates were given a choice about taking the drug.

Karas did not respond to three phone messages left at his office last week. In a Facebook post Thursday, he said the Washington County jail has had 531 covid-19 cases since the pandemic began, and there have been zero deaths and only one hospitalization among inmates. He did not say if the cases were treated with Ivermectin.

Karas also posted that he has treated more than 4,000 covid-19 patients at Karas Health Care clinics, and only eight patients have died.

State Rep. Robin Lundstrum, R-Elm Springs, said in a Twitter post that Karas had saved lives, taxpayer dollars and hospital bed space, and that he should be thanked rather than "stoned."

"I'm just saddened. Instead of saying this is something we need to look at, and following the science, we are calling for someone's medical license, because it doesn't fit somebody's point of view," she said.

Lundstrum said a lot of doctors are using Ivermectin early on to prevent covid-19 hospitalizations, but she emphasized that the drug should be used only under a physician's care.

Foster said he is neutral on whether doctors should prescribe the human version of Ivermectin to treat people for covid-19. He noted that doctors prescribe drugs for off-label uses all the time, and the practice is legal. If people want to use Ivermectin, they should enter into a doctor-patient relationship and use a human formulation under the supervision of a physician, he said.

"I don't have any data to say one way or the other to say it's right or wrong," he said.

Dr. Jennifer Dillaha of the Arkansas Department of Health said Ivermectin is not approved by the FDA for treatment of covid-19.

In doses approved by the FDA for other illnesses, Ivermectin won't help in treating covid-19, Sharkey said. In the high doses people have been using to treat the virus, it could be lethal, she said.

What to know about ivermectin:

• The FDA has not approved ivermectin for use in treating or preventing covid-19 in humans. Ivermectin tablets are approved at very specific doses for some parasitic worms, and topical (on the skin) formulations are approved for head lice and skin conditions such as rosacea.

• Taking large doses of this drug is dangerous and can cause serious harm.

• Prescription for ivermectin for FDA-approved use should come from a legitimate source and be taken exactly as prescribed.

• Never use medications intended for animals on humans. Ivermectin preparations for animals are very different from those approved for people.