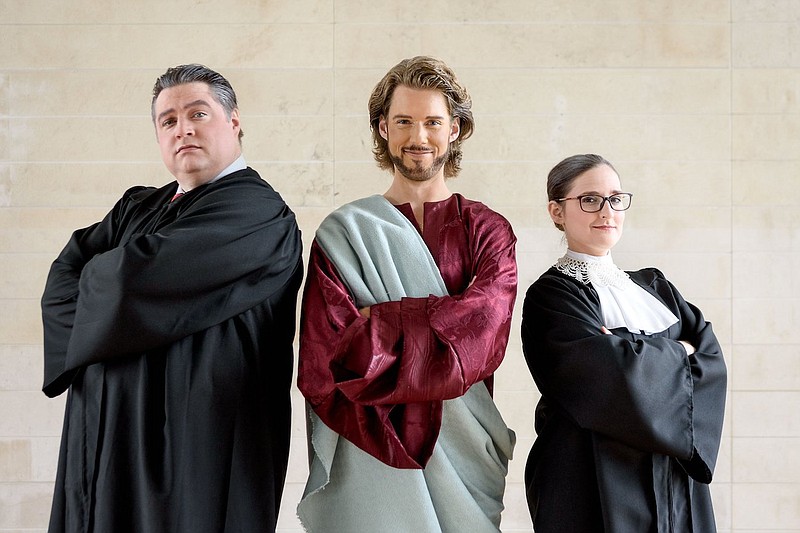 Matt Tatus (left) sings the role of U.S. Supreme Court Justice Antonin Scalia, with Shannon Rookey (right) as Justic Ruth Bader Ginsburg and Michael Colman (center) as the Commentator in Opera in the Rock's "Scalia/Ginsburg". (Special to the Democrat-Gazette/Wendy Kelley)

Soaring voices represent soaring sentiments in Derrick Wang's one-act opera "Scalia/Ginsburg," with which Opera in the Rock opens its 2021-22 season and its return to live performance.

Between them, lyric bass Michael Colman as a Hermes-like Commentator provided balance, both politically and musically.

Attendees will enjoy Wang's clever, rhyming, comic libretto as well as the many references he makes to and quotes from actual operas -- note that Scalia's insistence on constitutional originalism is set to Baroque ornamentalism; meanwhile, Ginsburg's judicial adaptability gets positively jazzy in spots. But if the ending, with its prominent message -- "We are different. We are one" -- doesn't inspire a few tears, you probably missed the point.

The audience's greeting of Rookey's entrance left no doubt as to their philosophical and political preferences; a partnership between Opera in the Rock and the Clinton Foundation is evident not only in the venue, but in pre-performance footage of Ginsburg's arena-filling 2019 appearance on the foundation's behalf that the opera folks cite as the principal inspiration for their choice of this opera.

Stage director Ella Marchment adeptly maneuvers her performers around a two-level thrust stage, with pink, blue and yellow glowing boxes for furniture and props. An orchestra of eight musicians from the Arkansas Symphony, with conductor Geoffrey Robson, were invaluable in support.

"Scalia/Ginsburg" will be onstage again at 2:30 and 7:30 p.m. today (masks required for the evening performance) and 2:30 p.m. Sunday at the Clinton Center, 1200 President Clinton Ave. Ticket information is available at oitr.org/events.