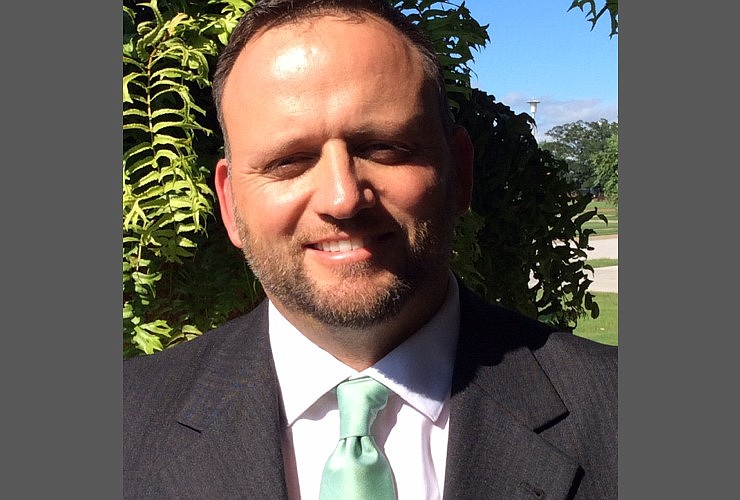 Jody Davis is shown in this 2015 file photo. At the time, Davis billed himself as the chief executive officer of Dragonfly Industries International, a company that he said wanted to build a wind farm in Elm Springs. He is now accused of scamming investors and was convicted on Sept. 3, 2021, of wire fraud, aiding and abetting wire fraud, money laundering and aiding and abetting money laundering.

FAYETTEVILLE -- Prison and religion were two of the central themes Thursday in the federal trial of two men accused of fraud in connection with a wind farm in Elm Springs that was never built.

Davis was serving time in federal prison in Texas for a fraud conviction in Oklahoma and Uchenne Obi, who was serving time for distributing heroin and money laundering charges, were introduced by a mutual friend who had participated in a prison ministry with both men.

Davis, by then with Dragonfly Industries and Ridings, pitched the idea of investing with the company to help build a prototype of a wind turbine Ridings had the idea for. Obi invested and recruited several others on as investors as well.

"Jody Davis was one of our Christian brothers so I never doubted or thought something was being done," Obi said.

They were led to believe the turbine had been tested and validated and an engineering company was working on the turbine, neither of which was true.

The group was promised rights to sell the purported wind turbines, which were never built, in Nigeria but instead ended up losing all but a pittance of the money they invested.

"Every time there was something coming up to fill the void of what happened to the money," Obi said.

Prosecutors say Davis and Ridings instead used the money for personal expenses, including cars, houses and vacations.

Obi, from the witness stand, said the group was told their money would be used to build models and the needed prototype but instead Davis and Ridings "used our money for a bucket of hot wings."

"I think there was no secret that he had served time, Embree said of Davis. But, both were true believers in God and had a connection in religion, which was more important than Dragonfly, Embree said.

Embree invested about $200,000 in Dragonfly, sending the checks through Fegen, he said. Embree said he knew there was high-risk but there was also the chance of high-reward if the concept worked.

Embree and his daughter still have not gotten their money back and Davis never told him how his money was used but, Embree said he still believes the technology would work.

"I knew what I got into," Embree said. "I take responsibility for what I did."

Embree said he talked to Davis last year and Davis was still looking for investors.

Davis and Ridings scammed six investors in Northwest Arkansas and southwest Missouri, according to an indictment. They are identified only by their initials. Investors lost amounts ranging from $13,000 to $300,000, the indictment claims.

One, Howard Mangrum, a commercial developer and contractor from Nixa, Mo., said he invested $200,000 of his own money and $100,000 he borrowed from his brother in Dragonfly in 2014. He understood the money was to be used to build the foundations for the towers for an 80 megawatt wind farm at Elm Springs and other site work or operations. Mangrum said he was helping design an assembly building for the site.

By 2015, there was no progress and Mangrum said he started asking questions and wanting details about the project. He questioned Davis but was told the only thing that could delay the project would be getting the necessary permits. Davis said the necessary studies were underway, Mangrum said.

Davis then started talking in 2016 about projects in Malaysia and Iowa but Mangrum passed on those.

By April 2017, Mangrum was again asking questions because he was seeing no progress and nothing but concepts with no engineering work. He asked who the engineers were, whether anything had been built yet and whether work on the turbine had even been started. Davis told him the files with the information were too big to email, Mangrum said.

Then, the FBI called Mangrum about Dragonfly, he said, and Davis was suddenly busy and couldn't talk on the phone.

Mangrum said in March, 2018 Davis promised to pay him back but that has yet to happen.

Davis' attorney, John Wesley Hall, has argued the agreements Mangrum, Obi and other investors signed included a clause saying any projections for potential growth of Dragonfly were only opinions and weren't legally binding and, further, the signers had done their due diligence.

Ridings never got a patent for his wind turbine even though he submitted at least four applications between 2008 and 2014, according to Robert Clarke, who works at the U.S. Patent and Trade Office.

Three of those applications were abandoned by Ridings and the fourth was rejected by the patent office in 2017 because Ridings didn't go into sufficient detail and there really was nothing new in the design, Clarke said. Ridings was issued a patent for a computerized vision testing system in 2008.

Prosecutors spent much of the rest of the day showing jurors how money flowed to Davis' bank account. Davis was down to about $7 in his personal account at one point in 2014, bank records showed. There was seldom more than a couple hundred dollars in the account.

But, in June 2014, that began to change. Multiple wire transfers and checks, some $10,000 and even one for $20,000, started rolling into Davis' account. Some were transfers from Ridings others checks made out to Dragonfly or Arkansas Wind Power by investors, the entity set up for the Elm Springs wind farm, according to bank records.

Prosecutors say Davis and Ridings hid bank accounts from their accountants and used investor money transferred to those accounts to buy a luxury vehicle, pay fitness club fees, make a down payment on a home and a trip to Walt Disney World in Florida, according to the indictment.