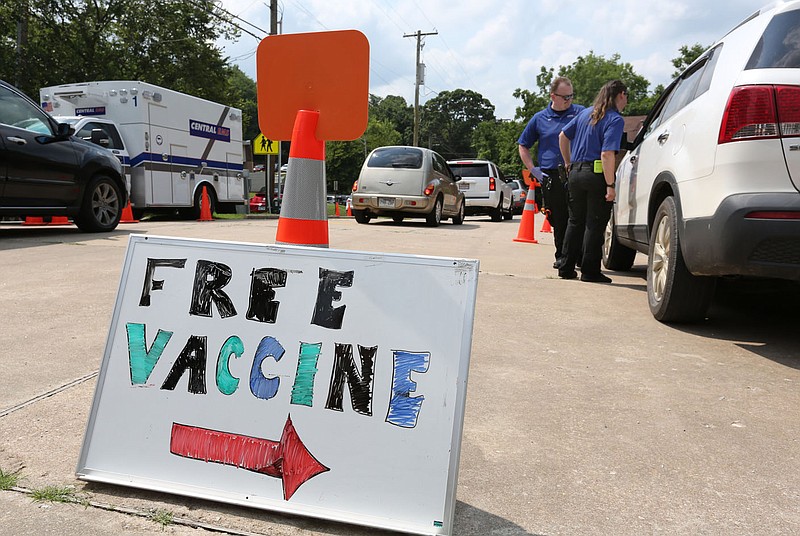 FAYETTEVILLE -- People who get fully vaccinated against covid-19 within the next two months will be eligible to receive $100 from the city.

The City Council on Tuesday approved using $400,000 in federal relief money to create an incentive program for vaccinations. The city is slated to receive $17.9 million from the American Rescue Plan.

Council Member Matthew Petty sponsored the measure. The program will apply to residents and people who work in the city. Those who get fully vaccinated before Oct. 15 will be eligible for a $100 bank card.

Petty encouraged businesses to take part in the program and match the dollar amount the city will provide for employees. Participation from food and hospitality businesses, health and social care providers and educational institutions also will help promote the program, he said.

Chief Financial Officer Paul Becker said the city could implement the program within a couple weeks. People who get fully vaccinated in the meantime will still be eligible to receive the $100 once the program is ready, he said.

Becker advised against the city sending the card in the mail or providing checks to prevent the items from being lost or stolen.

The council debated how much money to put into the program before settling on $400,000. Council members Mark Kinion and Teresa Turk supported allocating $250,000 instead, and putting more money into the program later if needed. The motion failed after the five other council members in attendance voted against it. D'Andre Jones was absent.

Becker said any money not spent on the program by the Oct. 15 deadline would go back into the city fund holding the federal recovery money.

In other business, the council voted 7-0 to allow outdoor drinking associated with special events at Centennial Park. Devin Howland, the city's economic vitality director, brought two items to the council that will create an Outdoor Refreshment Area at the park in time for two cyclocross events scheduled there.

The park will host a Union Cycliste Internationale world cup event Oct. 13 and world championships on Jan. 28-30. Spectators will be able to drink alcohol from specialized cups sold by vendors, just like how the Outdoor Refreshment Area downtown works.

Resident Tyler Wagner told the council of a neighborhood north of Wedington Drive with street names including Plantation Avenue and Chattel Street. The word chattel historically has been used in reference to slavery.

Such streets could be replaced with names such as Unity and Diversity, Wagner said, with guidance from the commission.

City Attorney Kit Williams said details on the makeup, terms and functions of the commission will come before the council in about a month.

• Affirming a Planning Commission decision to deny rezoning three separate tracts of land totaling about 20 acres near Futrall Drive and Interstate 49, on the western slope of Markham Hill.