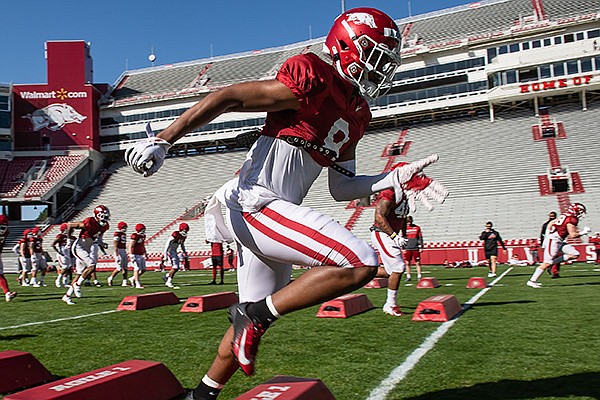 Arkansas defensive back Jayden Johnson (8) goes through a drill during 2021 spring practice.

FAYETTEVILLE -- The performance of early enrollee freshman defensive back Jayden Johnson this spring had University of Arkansas veterans taking notice.

"I'll tell you right now, I don't like making predictions," senior linebacker Grant Morgan said. "I don't make predictions. That kid's going to be a heck of a football player."

That's not a prediction. It's a statement of fact from Morgan's point of view.

"We saw it the first day he came on there," Morgan continued. "He was moving around like he's played in the SEC for four years already."

Sophomore safety Jalen Catalon, who burst onto the scene as a redshirt freshman with 99 tackles last year, said watch out for Johnson.

"You can tell he's a baller and he's played the game for a long time," Catalon said. "He's starting to realize, too, that you can do that and also know your assignment. Put it together and he's going to be unstoppable."

All of that praise means what to Johnson?

"It just makes me want to go harder," Johnson said.

The 6-2, 215-pounder from Cedartown, Ga., about 60 miles northwest of Atlanta, played multiple positions on offense and defense in high school, but he's quickly found a niche in the deep group of safeties at Arkansas.

With the Razorbacks, Johnson began as a field safety but quickly relocated to boundary safety and made an impact with multiple interceptions early in spring drills.

"I came out [of spring] feeling pretty good," Johnson said. "There's a lot of things I can improve on and that's what I've been working on this summer."

Johnson said one of his points of emphasis involves reaction time.

"I'd say just keeping my eyes where they're supposed to be and when I see it, just go," he said.

Johnson, who wears the No. 8, enters a growing safety group at Arkansas that has been pumped up in numbers, size and variety under defensive coordinator Barry Odom, who coaches the group.

In many of the Razorbacks' base sets, three defensive backs are on the field, including three safeties, two of whom often play near the line of scrimmage.

Catalon and senior Joe Foucha are returning starters at safety, while Blair merited significant playing time, including two starts, the same as freshman Myles Slusher in 2020. Malik Chavis had some standout moments in spring ball as did Johnson, giving the Razorbacks their best depth at the spot in years.

"I love it," Johnson said of the large numbers of defensive backs in Odom's top sets. "A lot of guys get to play."

Johnson said Blair has really taken him under his wing since his arrival in January, and that he's gotten tighter with the full unit in the last seven months.

"Just being closer to the DBs, it's easier to communicate on the field with that relationship," Johnson said, "so I feel like that helped me a lot."

Not everything has been rosy for Johnson, who said his welcome-to-the-SEC moment came early in spring.

Jayden Johnson had been a South Carolina commitment, but he liked what he saw from the Razorbacks last fall. His lead recruiter, former Georgia-based running backs coach Jimmy Smith, was persistent.

"I'd say the coaches were really telling me the real deal about everything, just giving me the rundown. I felt like I could play in the SEC, so that was a big jump also."

"Behind the scenes, he is not afraid to ask questions," Catalon said. "He's going to make sure he knows what he's doing. He's always asking me questions, not even from just a coverage standpoint, but what to do from a defensive standpoint."

"Hopefully, this name, image and likeness stuff doesn't mess with him, which I 100% don't think it will because he's not that type of kid," Morgan said. "He's going to have a really good career at Arkansas."

Jayden Johnson at a glance

Noteworthy Multi-position standout played quarterback, receiver, running back, cornerback and safety for his high school team. … As a senior, had 48 carries for 347 yards (7.2 ypc) and 5 touchdowns, and 17 receptions for 366 yards and 3 TDs while playing quarterback, running back and receiver. On defense, Johnson had 17 tackles, 3 interceptions, a forced fumble, a fumble recovery and a pass breakup. … Ranked the No. 26 player in Georgia by 247Sports. … Rated the No. 44 safety in the country by ESPN. … Chose Arkansas over Oklahoma, South Carolina, Georgia Tech, Kansas State, Virginia and others.