Arkansas increasing capacity for baseball games in May 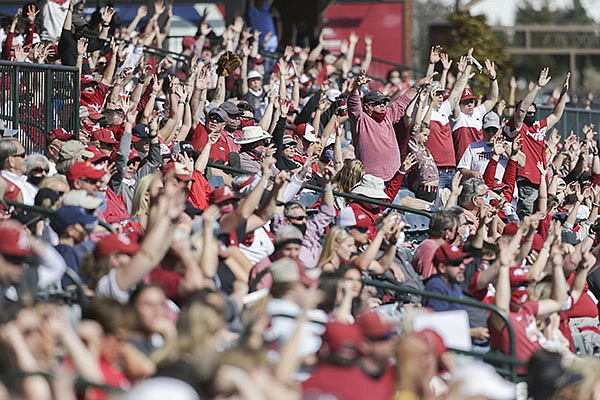 Arkansas baseball fans are shown during a game against Alabama on Sunday, March 21, 2021, in Fayetteville.

The Razorbacks will add 1,060 additional tickets for games during the month of May, which will cap attendance at 7,645 per game. Arkansas has scheduled SEC series against Georgia on May 7-9 and Florida on May 20-22, and a scheduled nonconference game against Arkansas State on May 11.

The May capacity will be approximately 66% of the ballpark’s listed maximum capacity of 11,531.

During an appearance on the “Halftime” radio show on ESPN Arkansas last week, Arkansas athletics director Hunter Yurachek said the Razorbacks will not expand to full capacity this season like their counterparts at SEC West programs Ole Miss and Mississippi State. A report Wednesday by The Advocate newspaper stated LSU also plans to return to full capacity beginning for this week’s games against the No. 1 Razorbacks at Alex Box Stadium.

“I think you’ll see some capacity increases, but we’ll never look like Ole Miss or Mississippi State did,” Yurachek said, referencing the Razorbacks’ series at Mississippi State on March 26-28 and Ole Miss on April 10-11. “I know that’s what our fans compare us to, but we’re not going to do that this year at Baum-Walker Stadium.”

Arkansas has adjusted the capacity for its home baseball games three times this season. Attendance was limited to around 4,218 for the first seven games of the season, but increased to around 5,735 for the final seven games in March, and to 6,585 for games in April.

The additional tickets for May games will be offered to Razorback Foundation members and season-ticket holders Wednesday. Any remaining tickets will go on sale to the general public Thursday at 9 a.m.

Arkansas (32-7, 13-5 SEC) is expected to be a regional host this year. The NCAA announced last week it would require host sites to limit attendance to 50% for regionals and super regionals, meaning any postseason games at Baum-Walker Stadium would have a lower attendance than games in April or May.