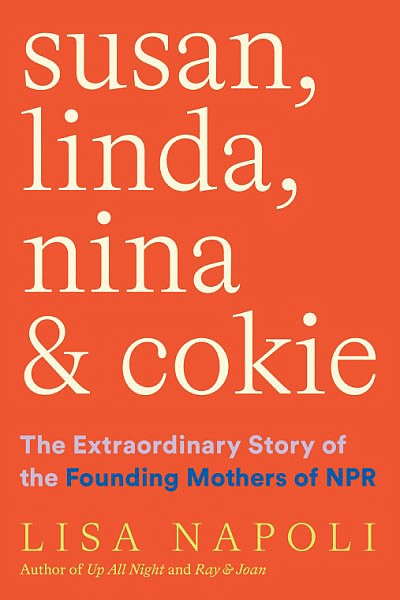 Susan, Linda, Nina & Cokie: The Extraordinary Story of the Founding Mothers of NPR

Before Susan Stamberg became a radio producer, the prevailing attitude in newsrooms was that "it would never do to have a woman in a supervisory position to a man."

When Nina Totenberg began scoring access to sources who avoided reporters, FBI Director J. Edgar Hoover called her a "persistent bitch," and envious journalists began suggesting that she "must be sleeping with someone."

In Linda Wertheimer's early days of covering Congress for NPR, Sen. James Allen of Alabama repeatedly called her "Little Lady." She responded with "Big Senator," and he apologized.

A prospective boss told young Cokie Roberts that women like her loved their dead-end secretarial jobs. Sure they did. As she recalled, "I knew an 'Our servants are so close they are actually members of our family' statement when I heard one."

Whenever men in power bemoan the changing role of women in America, it's those good old days they're missing. Surely the careers of these four women fueled the nostalgic longings of such men, bless their hearts. They are the stars of Lisa Napoli's new book, "Susan, Linda, Nina & Cokie: The Extraordinary Story of the Founding Mothers of NPR."

The book begins with the early life story of each woman and grows into an abridged history of National Public Radio as Napoli weaves their careers into it. She chronicles NPR's chaotic origins and later its dramatic financial rescue after the ouster of President Frank Mankiewicz, "the man who brought NPR to prominence -- and then nearly killed it."

Public radio's shaky beginnings created natural openings for women. WAMU in Washington, for example, was "so new and precarious, the pay so low, and the new program so untested that convention and chauvinism didn't, couldn't prevail," Napoli writes.

Throughout the book, she keeps readers mindful that these were the times when women were trying to excavate career paths in journalism and in the world at large. A glimpse into The New York Times newsroom in the late 1960s: Union payroll data revealed that "19 male reporters ... each earned more than the most senior female reporter, a star whose stories frequently made page one." Notes tucked into female employees' personnel files included these gems: "great legs, face only fair"; "good figure and is not restrained about dressing it to advantage"; and "a very good worker but looks are not great."

Three of the founding mothers came of age at women's colleges -- Wertheimer at Barnard, Roberts and Stamberg at Wellesley -- that were emboldening but telegraphing conflicting messages. Barnard Dean Margaret Pickel described women as having "less physical strength, a lower fatigue point and a less stable nervous system." Wertheimer endured tutorials on "how to snag the right man to ensure one's future." Roberts was reportedly despondent as she neared graduation with no plans to marry, knowing that "the unofficial motto for schools for women was 'a ring by spring or your money back.' "

Fortunately, these smart and ambitious women had little time for others' low expectations. One of Napoli's quiet but enduring themes is how other women helped them lift their gaze to envision bigger lives.

Wertheimer, for example, learned from her mother that "there were lots of things I could do and, that if somebody got in my way, I should get them out of my way." The first time Wertheimer saw Pauline Frederick on TV reporting from the steps of the United Nations headquarters, Napoli writes, "her ambitions shifted. 'To hell with being Edward R. Murrow's secretary,' she thought. 'I'm going to aim higher.' "

Totenberg relished coverage of "gutsy lady journalist" Marie Torre's imprisonment for refusing to reveal a source, which inspired her to imagine her own career. In the early 1970s, when the Gridiron Club still didn't allow women to join its storied annual dinner, Totenberg joined protesters outside, shouting to partygoer Justice Thurgood Marshall, "Shame!"

Parental influence looms large, too. Stamberg's father, Bob Levitt, a salesman in New York, was so proud of his daughter "that he offered support unthinkable for a man of his generation: to wash and dry the dishes every night so she could devote her utmost attention to her studies."

Soon, like so many working-class kids who go to college, she would be straddling two worlds. "In truth, her parents' pride in her educational quest was offset a bit by their intimidation. As the innate confidence they'd lovingly nurtured in their beloved daughter blossomed further, and as her spirit became enriched with the gift of knowledge, Sue drifted off to unfamiliar intellectual terrain, able to hold her own in rigorous debates on a wide variety of subjects."

Roberts grew up in the orbit of Washington as a daughter of two members of Congress: her father, Hale Boggs, and after his death, her mother, Lindy. (When Lindy decided to go for his seat, her dear friend Lady Bird Johnson asked, "How could you run for office without a wife?")

In Napoli's hands, Roberts' story is particularly moving, and not just because of her death in 2019. Early in her marriage to journalist Steve Roberts, Cokie reportedly suffered from great loneliness as the tag-along wife. "Waiting at home for Steve to return each evening, cooking elaborate meals in their awful kitchen, she began to feel like a 'basket case,' as if she were dying inside," Napoli writes. "She was certain that her beloved husband didn't grasp her despair. In 1966, there were no illusions that men and women inhabited the same universe, with the same opportunities."

After a few false starts, she started freelancing for CBS News. Her big break came in 1974, when she joined her husband in Greece for his assignment with The New York Times. While he was in Cyprus, one of her audio reports from Athens ran on the "CBS Evening News" with Walter Cronkite. "By the time Steve returned, Cokie had been transformed from someone who 'didn't know squat about being a radio reporter' to 'wizened veteran foreign correspondent.'"

When the Robertses returned to Washington, CBS ignored her again. Steve, "desperate to help her land a job," walked over to NPR and handed Cokie's resume to Totenberg, who was pressuring her boss to hire another woman. After she got the job, Wertheimer encouraged Roberts, who was familiar with the halls of Congress, to cover politics.

"They rose in concert with the escalating cries for 'women's liberation,'" Napoli writes. "Just as the world of Hollywood began to smack of female power, reflecting society's transpositions -- subservient June Cleaver replaced by crusty Maude; Gidget transformed into Norma Rae -- so, too, did the surreality of broadcast journalism begin to change."

The founding mothers -- Stamberg came up with the moniker -- were in the thick of it. Their solidarity was inspiring and sometimes intimidating. One male colleague called their section of the newsroom the Fallopian Jungle.

It was a time when they were all but unstoppable.

In 1972, Stamberg became the first woman to co-host a nightly national news program, "All Things Considered." In another first, Wertheimer persuaded the Senate leadership to let her broadcast live a floor debate -- all 38 days of it -- over the Panama Canal Treaty.

Wertheimer presided over 200 hours of broadcasting, performing "the play-by-play" for millions of listeners; "announcing the names of lawmakers as they spoke -- how else to distinguish all those male voices from one another?" Napoli writes; "filling time with guests she lined up when quorum calls created unseemly silence in the proceedings, and wrapping it all up every night in a 'post-game' show."

On the courts beat, Totenberg was breaking one big story after another and increasingly making news because of it. Envy spread like green mold. After Totenberg filed "an unprecedented bombshell" related to Watergate from the Supreme Court in 1977, a false rumor about her relationship with Justice Potter Stewart started creeping through newsrooms. She was unsurprised and unrattled.

"I had seven different court sources for the story," she said. "It was not leaked to me at all. I wouldn't have gotten the story if I didn't go after it."

As for Roberts, Napoli writes, the 1990s were "the decade of Cokie Roberts," whose pivot to television, while still reporting for NPR, turned her into a celebrity. Readers of George magazine voted her their "Favorite Talking Head." Spy magazine ran a flow chart of her orbit of influence with the caption, "Cokie Roberts: Moderately well known broadcast journalist or center of the universe?"

Through it all, the women stayed strong, together.

Napoli chronicles not just the camaraderie of Stamberg, Wertheimer, Totenberg and Roberts, but their commitment to help the careers of younger women who aspired to follow them. The founding mothers, in word and deed, offer a powerful lesson on what can happen when we carry as we climb.

Connie Schultz is a Pulitzer Prize-winning columnist and the author, most recently, of the novel "The Daughters of Erietown." 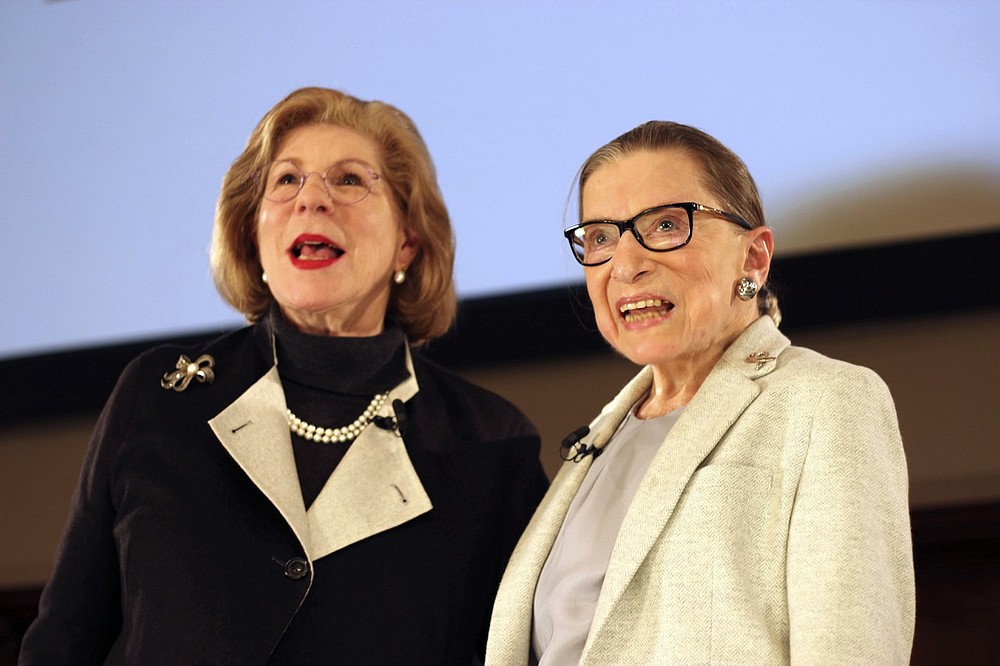 “Susan, Linda, Nina & Cokie: The Extraordinary Story of the Founding Mothers of NPR”