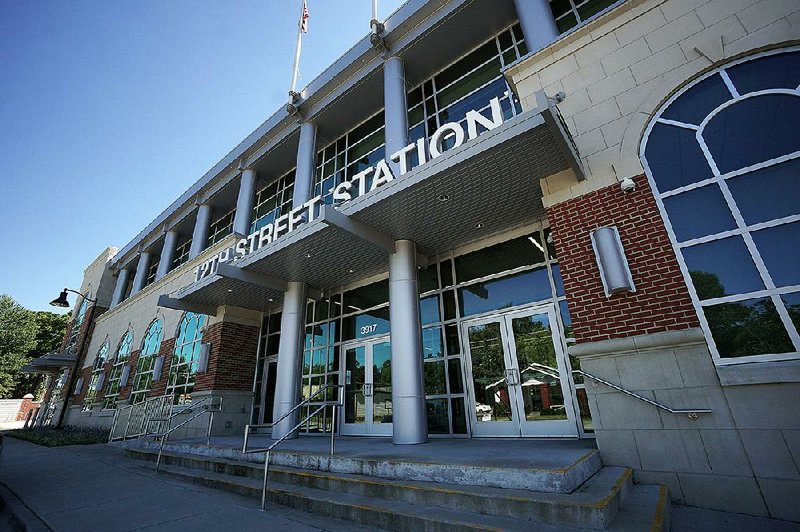 As detectives in the substation were finalizing paperwork, McClellan was able to remove his handcuffs, free himself from the table in his secure room and exit the building using his Pulaski County inmate ID, according to Edwards.

Once police learned of his escape, they locked down the building and called for all available officers to be notified, the release stated.

A witness called police about a man in a jail uniform hiding nearby, and, after setting up a search perimeter, officers detained McClellan in an abandoned building, according to Edwards.

McClellan will be charged with escape, the release states.

The incident is the second escape from the 12th Street Substation this week.

Saturday, a 16-year-old youth was detained by Little Rock police after a shooting in west Little Rock that killed one man.

Keaton McGee was taken to the 12th Street substation when he said he needed medical attention. While being placed in a police cruiser to be taken to a hospital, he was able to flee the scene.

With the help of North Little Rock's Police Department, officers searched with dogs and drones but did not find McGee until four days later, when he was arrested Wednesday afternoon near Stagecoach Road and Interstate 430.

McGee, who was already out on bond in connection a March shooting, was charged Thursday with capital murder in the killing of 22-year-old Deante Smith of Forrest City.

A Little Rock officer also had his vehicle stolen early Thursday morning after he left the keys inside the vehicle before going inside the Pulaski County jail.

According to Edwards, the Little Rock Police Department does not have a security issue, but they do have to ensure departmental procedures are followed to avoid situations like the escapes.

"We just have to make sure our detainees are checked and secured better," Edwards said.

Authorities said investigations will be made into both incidents to look for policy violations by the involved officers.

McClellan was taken to the 12th Street Substation Wednesday for questioning after investigators identified him as a suspect in two different theft of property incidents.

On March 22, police said a man identified as McClellan contacted Wholesale Electric Supply at 6320 Young Road in Little Rock claiming to be with a Benton company and ordered copper wiring that he later picked up from a North Little Rock distributor.

Police say the same man also contacted Elliot Electrical Supply at 5505 W. 65th St. around the same time, claiming to be from a different company and taking the 685 feet of copper wiring from the same distributor.

On April 6, investigators said they learned Broach Refrigeration Inc. was the owner of the vehicle used to scrap the copper wire on March 20 and March 22, and that McClellan did not have the authorization to drive the company vehicle during the day or sell any scrap metal to a recycler.

Both incident reports cite felony theft of property, unauthorized use of another person's property to facilitate certain crimes and criminal impersonation as offenses committed.

McClellan was in the Pulaski County jail on felony impersonation and misdemeanor theft of property charges.

On April 7, he was arrested at 2:47 p.m. down the street from Argenta Drug Co. at 345 N. Main St. Police said he told detectives that he had identified himself as an officer to store employees where he stole three bottles of promethazine.

McClellan is also identified as a suspect in theft that same day of the same kind of bottles from the Kroger Pharmacy on 614 Beechwood St. in Little Rock, according to an incident report.

The theft of the police cruiser happened when an officer parked near the sally port on the south side of the jail and entered to assist an officer in booking a prisoner around 2:30 a.m., according to an incident report.

"After completing the process, I returned to discover my patrol vehicle had been taken," the narrative of the report states.

The reporting officer in the report is Chad Glover.

Coleman was the most recent release of the jail when the car was stolen and video surveillance showed him entering the vehicle before driving off, the report states.

Coleman was charged with felony theft of property.

Information for this report was provided by Briana Kwasnik of the Arkansas Democrat-Gazette.