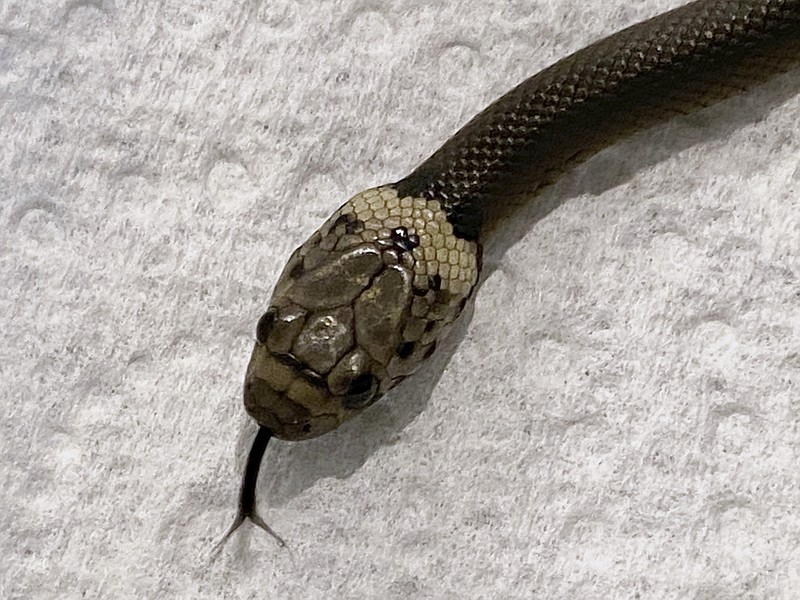 In this photo provided by Wildlife Information, Rescue and Education Service (WIRES), a Pale-headed snake is photographed in Sydney, Thursday, April 15, 2021. This is the venomous snake that authorities say made an 870-kilometer (540-mile) journey to Sydney from a Toowoomba packing plant wrapped in plastic with a pair of baby cos lettuces. (Gary Pattinson/WIRES via AP)

• Alex White said he "completely freaked out" when he noticed a snake in the plastic-wrapped lettuce he had just taken home from a supermarket in Sydney, Australia, later learning from the rescue organization he called that it was a venomous pale-headed snake.

• William Amos, a Canadian Parliament member, apologized for appearing naked in a virtual meeting of the House of Commons, saying his video accidentally turned on as he was changing into his work clothes after a jog, adding that it was "an honest mistake."

• Louis Williams, 36, a sheriff's employee in New Orleans, faces multiple charges, including trying to introduce contraband into the jail, after admitting to investigators that he was paid $1,000 to deliver a package containing Suboxone and synthetic marijuana to an inmate.

• Tesia Akins, 33, of St. Louis was sentenced to 15 years in prison for fatally hitting her boyfriend, 35-year-old Jerome Robertson, with her car during an argument and leaving his body in a ditch along the road.

• Vladyslav Dryhval, 46, of London was charged with possessing an offensive weapon and possessing a bladed article after British police said they were alerted to reports of a man carrying an ax near Buckingham Palace, the official residence of Queen Elizabeth II.

• Elvis Harold Reyes, 56, of Brandon, Fla., who posed as an immigration lawyer, filed hundreds of fraudulent asylum applications and collected more than $411,000 from unwitting clients, has been sentenced to more than 20 years in prison for mail fraud and aggravated identity theft, federal prosecutors said.

• Erik Eduardo Cabrealopez was captured by police in Spalding County, Ga., after a car chase and charged with murder, aggravated assault, kidnapping, concealing a death and evidence tampering in the deaths of two men whose bodies were found burning in a pickup days earlier.

• Latoya Lisa Dythe, 26, a police officer in Tulsa, faces up to 10 years in prison after pleading guilty to lying to a firearms dealer to illegally purchase a firearm for her boyfriend, with the Police Department saying she is on unpaid leave.

• Jared Randall Carter, 33, was sentenced to life in prison after prosecutors presented evidence that he struck his 81-year-old grandmother, Valeria Jean Mann, of Warner Robins, Ga., with a ceramic Crock-pot dish and stabbed her with a kitchen knife in 2018.