RECIPES: Straight to the heart

Artichokes look tough, but preparing this bud is actually quite simple by Gretchen McKay, Pittsburgh Post-Gazette (TNS) | April 14, 2021 at 2:03 a.m. 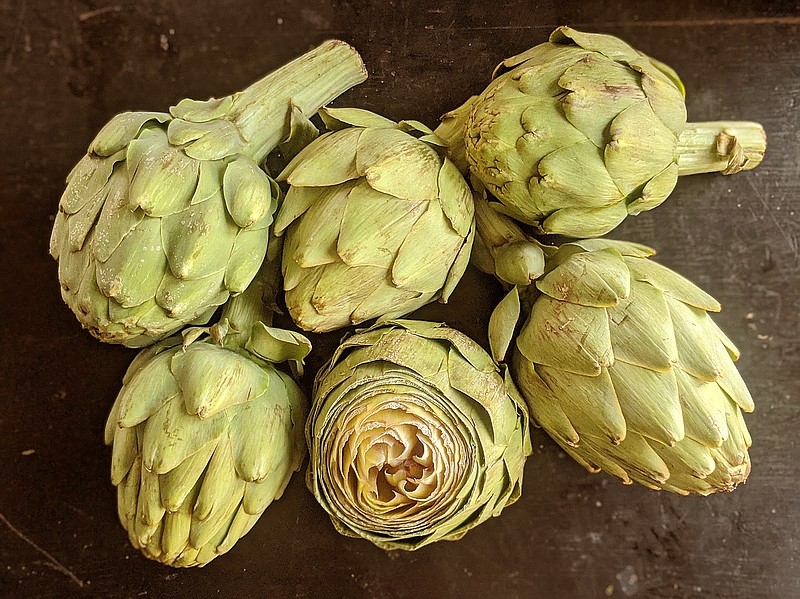 Artichokes are in season now and can be boiled, steamed, fried or stuffed, and baked. (TNS/Post-Gazette/Gretchen McKay)

Is there an ingredient you're leery of, either because it's intimidating or because you're clueless about how to cook it?

For me, that is the artichoke.

I've listened to my Italian neighbor, Josephine, sing its praises on multiple occasions. I'm pretty sure she breaks into song when it comes in season in March. I, on other hand, feel cleaning and cooking an artichoke looks like too much work. Also, what's up with having to strip the artichoke "meat" from inside the petals with your teeth?

Even the name is unappetizing. Do you really want to associate choking with eating?

I didn't grow up eating artichokes. It wasn't until I had children that I tasted the jarred variety in one of its most common preparations — baked spinach-artichoke dip. Made with cream cheese, mayonnaise, sour cream, parmesan cheese and garlic, the warm dip is standard party fare because it's easy to make and super tasty.

Artichokes are tricky to handle and eat. Their tough spiky bracts, or leaves, promise to puncture your fingertips. The fuzzy white centers — known as chokes — which protect the tender heart, can get stuck in your throat if you don't meticulously scrape out all the fibers. 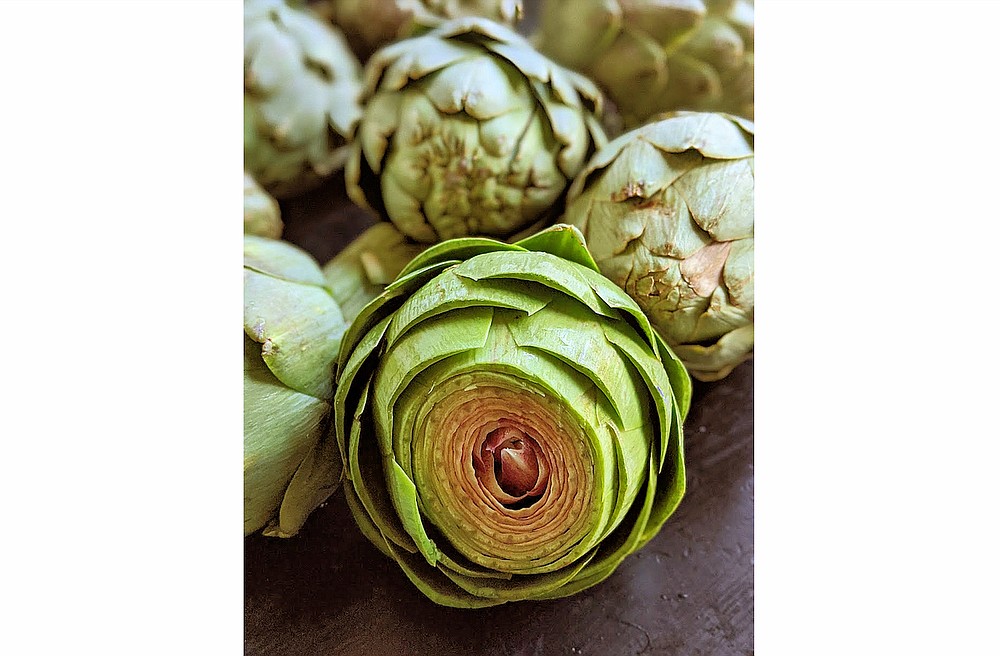 Artichokes look intimidating but they're actually very easy to cook and have tender, flavorful leaves. The peak season is March through May. (TNS/Post-Gazette/Gretchen McKay)

Yet the other day, after watching video after YouTube video, I cleaned and then cooked about a dozen of the spiky green globes. And I was smiling.

I thank actor Stanley Tucci for that.

I'm a big fan of his two Italian cookbooks. But his new Italy travel show on CNN, "Stanley Tucci: Searching for Italy," is nothing short of magical.

In each of its six episodes, he eats his way through a region of Italy. He showcases special foods — in envy-inducing bites — from a particular region along with the age-old cooking methods that define them.

Week two landed him in Rome, where he sampled the sweet buns, maritozzi, tasted bowls of rigatoni all'amatriciana and carbonara, stopped by an offal restaurant for some unusual organ meats, and most delightfully, introduced viewers to carciofi alla giudia, Jewish-style fried artichokes.

Born in Rome's Jewish ghetto, the dish transformed unloved ingredients into a "food for the ages," he tells viewers. Fried artichokes turned Jewish cooking into the "third pillar of Roman cuisine." When I watched him taste the crispy, golden-brown artichokes, I wanted to taste them, too.

The following weekend, I headed to the grocery store to make it happen.

First things first. While it's classified and eaten as a vegetable, an artichoke is actually the unflowered bud from a large plant in the thistle family. That explains why it's spiny on the outside and hairy on the inside.

There are more than a dozen artichoke varieties, but the most common one sold in U.S. grocery stores is green globe. An artichoke can reach the size of a softball and should feel heavy for its size. A fresh one will have tightly packed leaves, and it should squeak ever so slightly when you squeeze it.

Don't worry about the brownish spots on the leaves or stem. Artichokes turn black immediately when a cut part comes into contact with air. Frost also will cause spots. They can last in the refrigerator, unwashed, for about a week with no problem.

Despite the fact they're often served with a boatload of melted butter, artichokes are generally a healthful, whole food. Along with being rich in fiber, they are loaded with antioxidants and nutrients like vitamin C and iron and can aid with digestion and liver function.

To get to the pale, creamy-looking heart that's so delicious, all you need is a bowl of lemon water, a pair of kitchen shears, a sharp paring knife and a chef's knife (serrated works well, too). It's probably good to have a waste basket next to your cutting board because the leaves, which are too bitter to eat, will really pile up as you clean the artichokes.

Here's how to trim an artichoke and get to its heart.

First, cut a couple of lemons in half and squeeze the juice into a large bowl of ice water, then toss the halves in. As you trim the artichokes, toss them into the water to keep them from browning. Or, you can rub the artichoke with cut lemons as you go along.

Next, if you are steaming the artichoke, cut off the excess stem so it will sit flat and upright in the steamer.

Starting at the bottom, remove the tough and smaller leaves toward the base with your fingers. Then, using the kitchen shears, cut the thorny end of each individual leaf. Remember occasionally to dip the artichoke in the lemon water or rub a cut lemon over the artichoke as you go.

When the leaves are all trimmed, cut an inch or so off the top of the artichoke, spread the leaves with your fingers, give it a final rinse under some running water and you will be ready to rock and roll.

If you're only going to use the hearts, you'll need to pull off all of the leaves until you hit the yellow part, where it feels soft and tender. Then, cut off the top, and trim the bottom of the artichoke of anything green. Finally, trim and peel the stem.

To remove the choke, spread the leaves out like a flower and using your fingers or a spoon, pull out the purple leaves and everything that's fuzzy. Or, cut the artichoke in halves or quarters and use a spoon or your fingers to scrape away the choke.

Once cleaned, an artichoke can be cooked in any number of ways. Steaming is a classic preparation, but it also can be boiled, baked, fried or even grilled. Whatever method you choose, you'll know it is done when it can be easily pricked with a fork.

Artichoke season runs through May, so maybe you, too, will be inspired to tackle one of spring's most intimidating offerings. I hope you'll feel proud of the tasty results like I was.

This classic preparation is probably the easiest way to cook artichokes. To eat, pull off a cooked leaf from the top, dip it into some butter, mayo, and then scrape the flesh off with your teeth. Remember to remove the fuzzy choke with a spoon before eating the heart.

Trim stem so artichoke stands upright, then snap off tough outer leaves. Snip remaining sharp or spiky tips using kitchen shears. Using a serrated or chef's knife, cut off the top third or so of the artichoke.

Cut 2 lemons in half and squeeze the juice into a large bowl of ice water, then toss the halves in. Set aside.

Rub surfaces of the artichoke with the third lemon, halved crosswise, to prevent discoloration, or dip it into lemon water. Repeat with remaining artichokes and lemon.

Set a steamer basket in a large pot. Add enough water so it reaches just below the basket. Squeeze lemon juice from 4th lemon into water and add salt. Bring to a boil.

Place artichokes in steamer basket. Cover pot, and steam until heart is tender when pierced with a tip of a paring knife and inner leaves pull out easily, 25 to 35 minutes; add more water to pot, if necessary.

Serve warm or at room temperature with Hollandaise sauce, mayonnaise or melted butter for dipping. 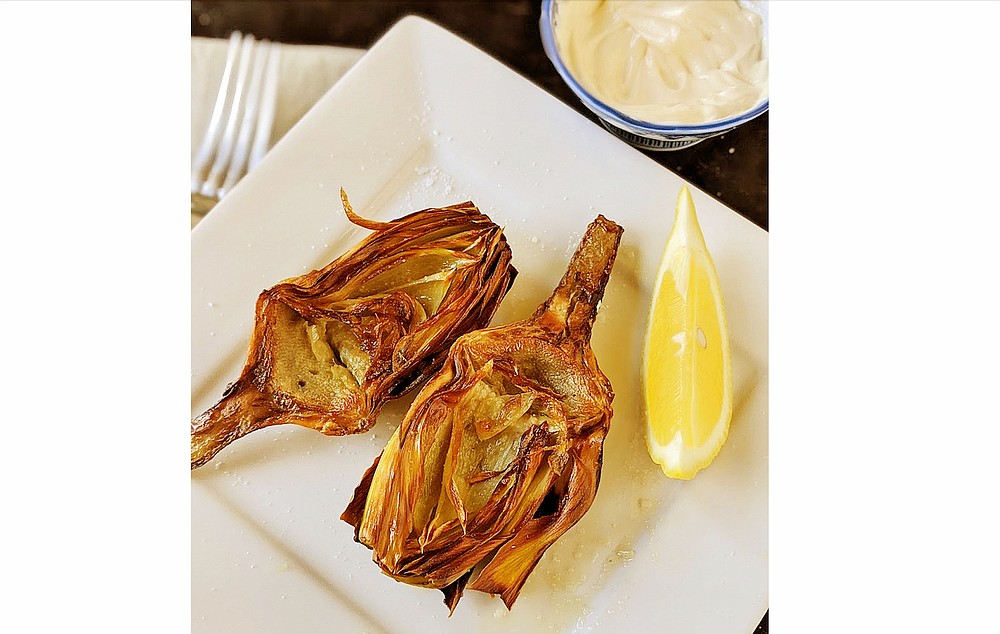 Artichokes halves fried in olive oil can be served with mayonnaise for dipping and wedges of fresh lemon. (TNS/Post-Gazette/Gretchen McKay)

Fried artichokes are crispy like french fries but so much sweeter. The original recipe calls for frying the artichokes twice for maximum crispness, spread out like flowers, but I opted to instead cut them in half and only fry them once. It was faster. You don't need anything other than salt for serving.

Mix salt and pepper in a small bowl. Fill a large bowl with water and add juice and rinds of lemons. Set both bowls aside.

Using a sharp paring knife, shave off the tough outer leaves of artichokes until you reach the tender pale green or yellow leaves and create a bulbous shape.

Cut off at least an inch of the thorny top. Trim the stem near the heart, peeling off the outer green fiber and leaving about 2 inches of stem if possible. Immediately put the artichokes in the lemon water to prevent browning.

Fill an electric skillet or deep cast-iron enameled pot with enough oil to almost cover artichokes. Heat to 325 degrees. While oil is heating, dry artichokes well with paper towels. Cut cleaned artichokes in halves or quarters, remove the hairy choke, and sprinkle with salt and pepper, rubbing in the seasoning.

Fry artichokes in batches. Cook, turning occasionally with tongs, for about 15 minutes, or until a fork easily pierces the stem at its thickest point. The outside should be bronzed.

Drain well and serve immediately with a sprinkle of salt. Eat with your fingers.