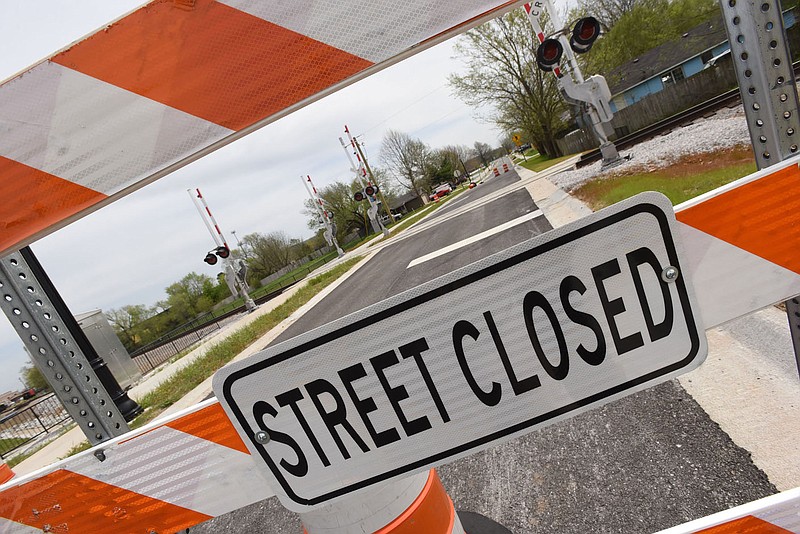 A railroad crossing on Maple Street in Springdale is behind barricades. The city has spent nearly $500,000 for a new crossing of the Arkansas & Missouri Railroad’s tracks at West Maple Avenue.But railroad officials won’t let the crossing open. Go to nwaonline.com/210411Daily/ for today’s photo gallery. (NWA Democrat-Gazette/Flip Putthoff)

SPRINGDALE — The city has spent nearly $500,000 for a new crossing of the Arkansas & Missouri Railroad’s tracks at West Maple Avenue and closed a crossing on East Meadow Avenue at the railroad’s request.

The longer the Maple and Meadow crossings remain closed, the more traffic is diverted to the Caudle Avenue crossing a few blocks south of the crossing.

The Caudle crossing offers nothing in the way of safety mechanisms except for a stop sign. The Maple Street crossing sports lights and gates to make everyone safer, said Ernest Cate, city attorney.

City and railroad officials have been negotiating since the fall and will meet again Monday, Sprouse said. The city wants to renegotiate an agreement it signed with the railroad in August, which included a $25 million policy and other conditions.

“At that time, we asked them to concentrate on the Maple project immediately before us, so we could get that crossing going,” he said.

“I think the money would be better spent by upgrading other crossings rather than sitting in an insurance policy,” Sprouse said. “We think there’s a better solution for the city, the railroad and the residents.”

The railroad March 29 proposed a $10 million insurance policy and the closing of the Caudle Avenue crossing, to which the city has agreed, Cate said. But nothing has been set in stone, he cautioned.

The Arkansas & Missouri is a short-line railroad running 150 miles from Monett, Mo., to Fort Smith. The railroad has recorded 14 accidents at railroad crossings since 2016, resulting in three injuries and no deaths, according to the Federal Railroad Administration.

The railroad serves many of the city’s industrial companies Sprouse said. Those industries also make the city important to the railroad, he said.

Railroad officials and the company’s attorney, Joel Johnson of Hayes, Johnson and Conley law firm in Fort Smith, declined to comment on the negotiations.

Sprouse said the railroad asked to close a street crossing at East Meadow Avenue, saying it was dangerous. The city closed the street in March 2018. The crossing sat just south of the railroad’s depot for the excursion train, which operated on several tracks crossing Meadow. The depot’s buildings and passenger cars blocked motorists’ views of the tracks, Sprouse said.

The city agreed to closing Meadow with an understanding a new crossing could be built at Maple, Sprouse continued. The Maple crossing is a few blocks south of the Meadow crossing.

City officials thought they had a “gentlemen’s agreement” with the railroad to open a new railroad crossing at Maple.

The agreement Sprouse signed in August also asked for an annual $13,000 maintenance fee from the city and fencing around the crossing.

He noted the railroad also initially agreed to pay the construction cost of building the Maple Street crossing.

Cate said he feels both sides are close to a new agreement.

The city suggested adding the liability protection to the railroad’s current liability policy, with the city paying the extra premium, Cate said. The city carries no liability insurance because Arkansas law protects local governments and their officers from most liability lawsuits.

An email in August to Cate provided the city a list of 14 insurance brokers that said no when Farris Insurance Agency, acting on behalf of the city, contacted them for a railroad protective liability policy.

One of the companies, Saville Public Entity of Nor-cross, Ga., denied insurance, according to records provided by Cate. The company said it had seen liability insurance for railroads only on construction projects and those policies were never that high.

“The agreement is very simple compared to others we have seen and unreasonable,” a company official wrote, referring to the amount of coverage. Saville specializes in insurance for local governments.

Johnson, attorney for the railroad, replied all other cities along the railroad complied with its requests.

“It’s expensive, but doable,” he said.

The city hasn’t yet put such a policy in place, he said. Fayetteville also will pay for the construction costs of the new crossings and close two current crossings.

“We’ll close one for each one we open,” he said.

The amount of insurance required of other cities was lower because they agreed to close more than one crossing, according to an email to Springdale officials from Johnson.

Garland also holds the designation of Arkansas 112, and the state Department of Transportation has announced plans to improve that highway from Fayetteville to Bentonville.

The city will close the crossing at South University Avenue by the Walmart Neighborhood Market and Jocelyn Lane off North Gregg, which serves just one home, Brown said.

Fayetteville also will pay a yearly $7,500 maintenance contract with the cost increasing with the Consumer Price Index, Brown said.

Chugging down the line

The Arkansas & Missouri Railroad was established in 1986 as a Class III railroad running a 150-mile route from Monett, Mo., to Fort Smith. A&M’s corporate headquarters is in Springdale, with major operations based in Springdale and Fort Smith.

The railroad also operates an excursion train that carries 40,000 a year through the Boston Mountains between Springdale and Van Buren. 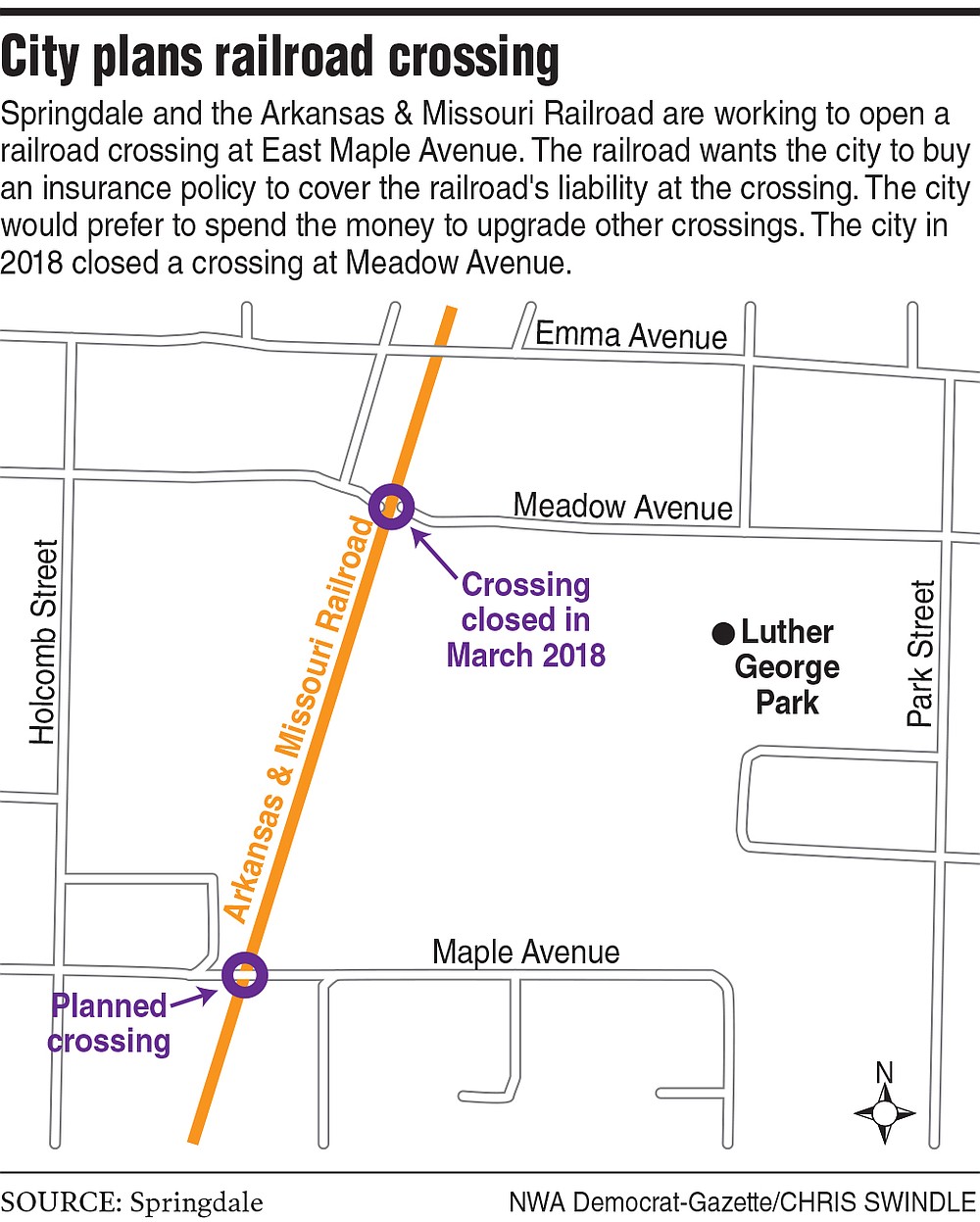