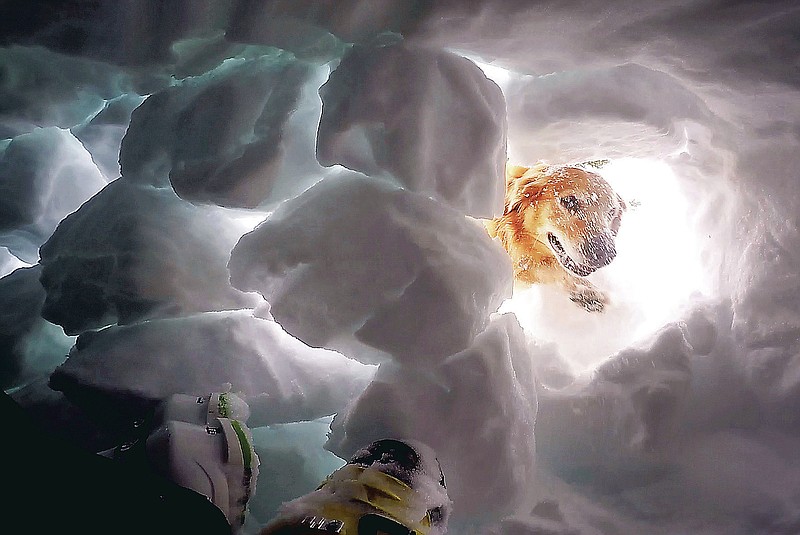 Ski patrol dog Buster breaks through the snow to find a victim of a simulated avalanche burial during a training exercise at Sugar Bowl Resort in Norden, Calif. on March 17, 2021. Rescue dogs at Lake Tahoe ski resorts receive specialized training to rescue people from avalanches in Nevada and California. They're trained to detect human scents, find buried clothes and rescue people sunk 10 to 12 feet (3 to 3.7 meters) in the snow. (Jason Bean/The Reno Gazette-Journal via AP)

RENO, Nev. -- Buster's workday at Sugar Bowl Resort starts with a solid game of tug-of-war. His co-worker, Nova, starts her day with a vigorous roll in the snow.

Buster, Nova, Graupel and Griffey are black Labradors and golden retrievers that love to frolic and play. They are also critical members of the resort's ski patrol team.

Avalanches are often associated with backcountry skiing and riding, but they can happen at resorts too. To prepare for the "what-if" situation, many Tahoe-area ski resorts have dogs that serve on their ski patrol teams.

"There's no technology in the world that can compete with a dog's nose (if you get buried)," said Sugar Bowl ski patroller Andrew Pinkham.

DOGS THAT NEED A JOB

The dogs that serve on ski patrol aren't your run-of-the-mill house dogs.

Patrol members look for dogs that have high drive – ones they say make "bad pets."

"We want dogs that really need a job," Pinkham said.

The handlers work with breeders and agencies to find dogs suitable for the position -- Graupel comes from a line of working dogs including parents that both serve on the Canadian border patrol looking for explosives.

"Many pet owners want their dog to hang out and cuddle on the couch. We look for dogs that are kind of fiery and have a lot of drive to search and hunt so we can ask them to perform these longer, harder tasks in mountain environments," said Chase Allstadt, ski patroller and dog team coordinator at Alpine Meadows. "That's what I share with my handlers -- you are getting a dog your spouse may not love."

Each handler purchases and trains his or her dog, and it's not cheap. Sugar Bowl's handlers estimate they spend about $1,500 on each dog.

"It's part of the passion of what we love to do -- being on the mountain and keeping people safe," said Mike Trombetta, Graupel's handler. "I am passionate about avalanche safety and awareness, and the dogs are another tool for the box."

The dogs are trained to play the game "hide and seek," which mimics finding people in an avalanche, Sugar Bowl Patrol Director Courtney Meyerholz said.

Eventually, the dogs learn to differentiate between the scents of skiers and riders who have fallen over in the snow and people who have become trapped beneath snow.

Sugar Bowl has two dogs that are validated -- meaning they're qualified to participate in search and rescue operations -- and two working toward validation. Alpine Meadows has three validated dogs and three more in training.

It takes about two to three years to train the dogs before they are validated by the Placer County Sheriff's Office.

For a dog to become validated, it must find a "victim" within 10 minutes on a 2.5 acre search field. The dog is also given extra time to find three buried items of clothing while its handler must find hidden beacons -- transceivers that backcountry skiers and riders wear in case they are caught in an avalanche.

"The whole process of bringing these dogs through until they validate is a journey," said Chris Dunbar, who works at Sugar Bowl with his dog, Nova. "But once you're at the end, it's really rewarding to see it pay off."

Sugar Bowl and Alpine Meadow's patrol members estimate their dogs can find someone buried up to 10 or 12 feet below the surface. Studies show 93% of avalanche victims are recovered alive if they are found within 15 minutes -- after that, the odds of survival drop significantly.

Both Sugar Bowl and Alpine Meadows declined to release the number of avalanches at the resort over the past several years.

"It is quite likely in a dog's career, that they never respond," Allstadt said. "Most of our ski patrollers experience slides in their volunteer work outside the resorts. Call-outs usually occur outside the ski resort capacity."

In his 15 years on Alpine Meadows' ski patrol, all the searches he's responded to have been outside the resort, he said. During those situations, avalanche beacons failed to locate the victim, and "at that point in time, you've gotta rely on a dog. It's the only tool that hasn't been tried."

Buster, who Meyerholz co-handles with Pinkham, has been mobilized for action three times but has never been deployed at the resort.

"You mobilize all your resources, but hopefully you don't have to use them," Meyerholz said.

While resort avalanches are rare, they aren't unheard of.

In 2016, a Sugar Bowl rider who traveled out of bounds triggered an avalanche. A Mount Rose Ski Tahoe skier who went out of bounds was also killed in a 2016 avalanche. In 2020, an Alpine Meadows avalanche killed one person.

"The ski resorts in the Tahoe area do a really good job mitigating the avalanche hazards," Sierra Avalanche Center President JB Brown said. Brown is unaware of any avalanches at area resorts this year. There has been one fatal avalanche in the backcountry this year. A 43-year-old man died March 20 in an avalanche triggered by a collapsing cornice near Truckee, California.

During a training exercise, Dunbar, of the Sugar Bowl ski patrol, was "rescued" from an avalanche simulation at Sugar Bowl.

He crawled into a snow cave in ungroomed snow in the trees near the bottom of a run. Another patroller removed his skis and poles and placed blocks of snow over the opening of the cave, burying Dunbar about 3 feet below the surface.

A few rays of sunlight made their way through cracks in the snow as Dunbar sat mostly in the dark. He could hear people outside the cave, but those outside the cave could barely hear him, even if he yelled.

At the top of the run, Buster waited with his handler. The pair skied partway down the slope, and when they were about 1,000 feet away from the cave, Buster was given the order to search.

He sprinted down the slope and quickly located the scent. After several minutes, Buster clawed at the pile of snow bricks holding Dunbar in the cave.

After a minute or two of frantic pawing, he broke through. His task was complete, and he was rewarded with praise and a game of tug-of-war.

After the exercise, Buster ran back down the slope, hopped on the chairlift and headed back to the top of the mountain.

"The life of an avalanche dog never stops," Meyerholz said. 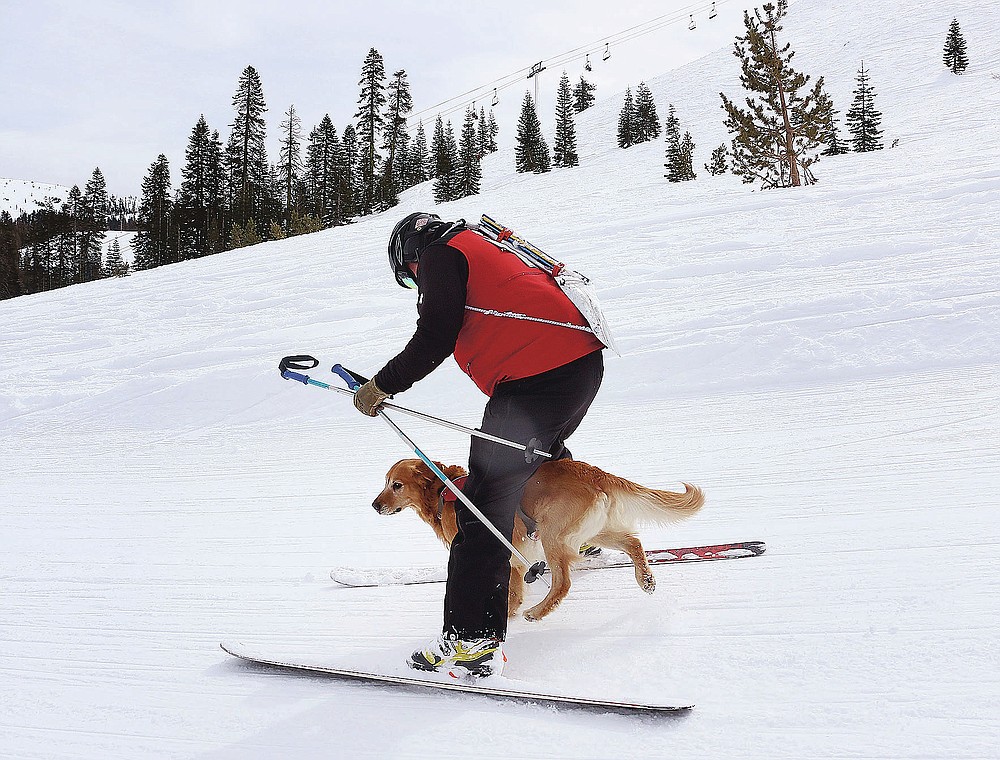 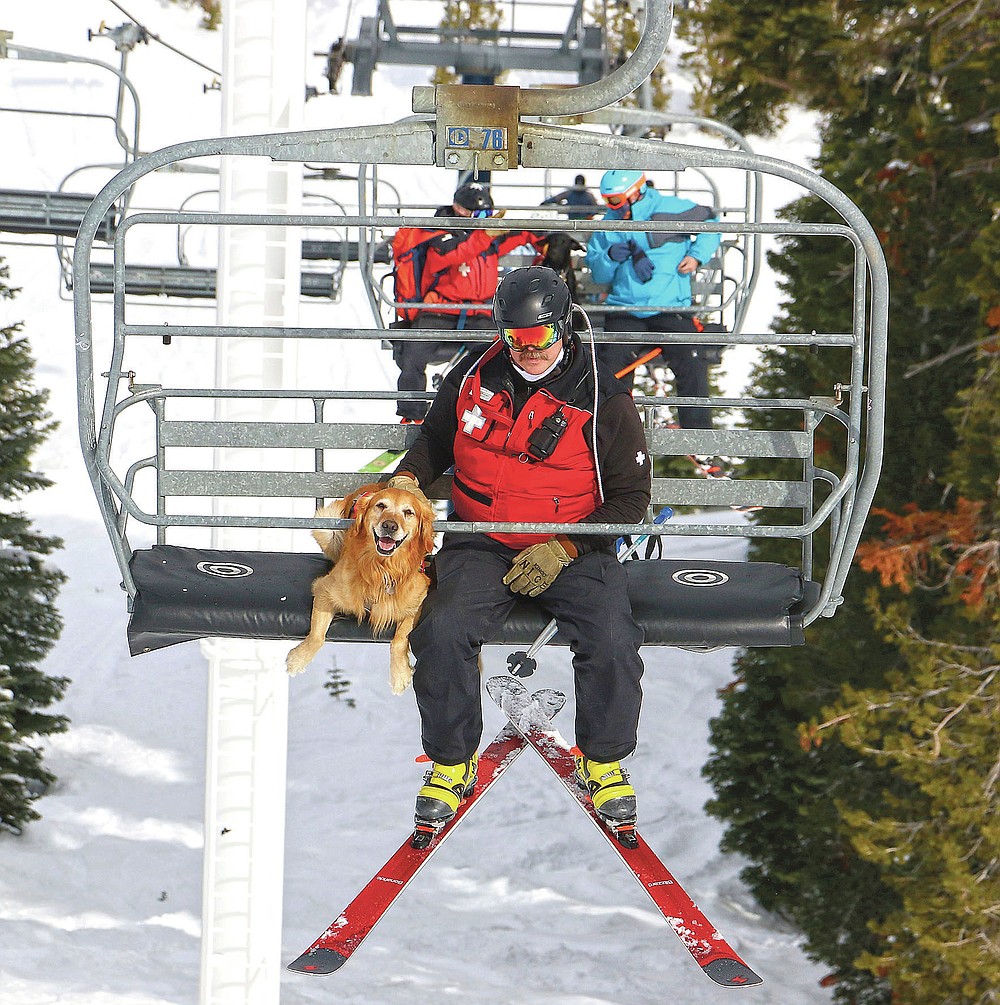 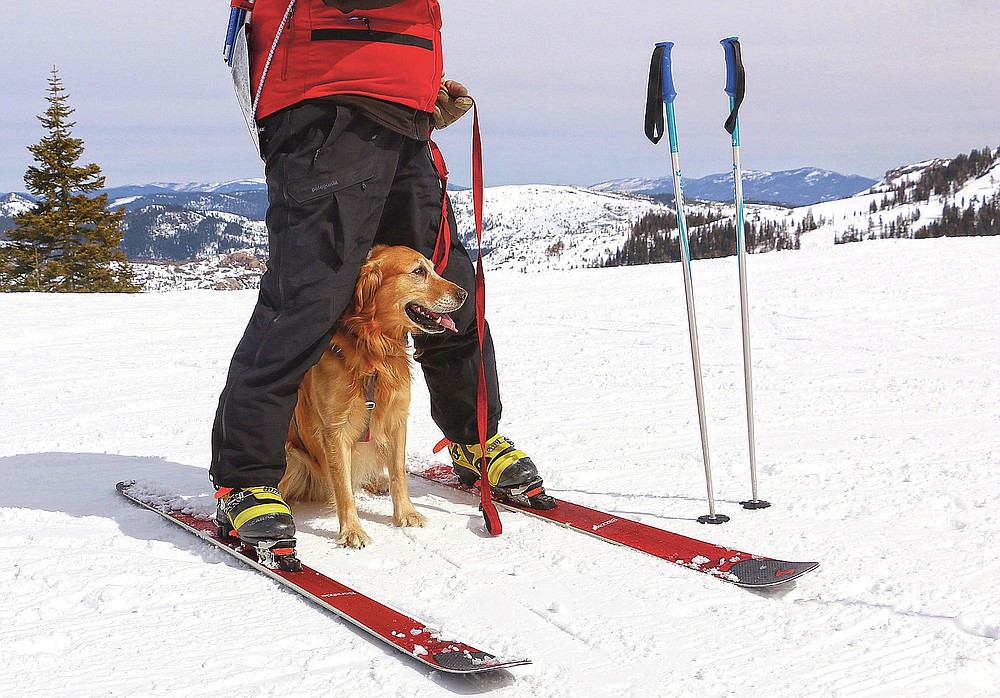