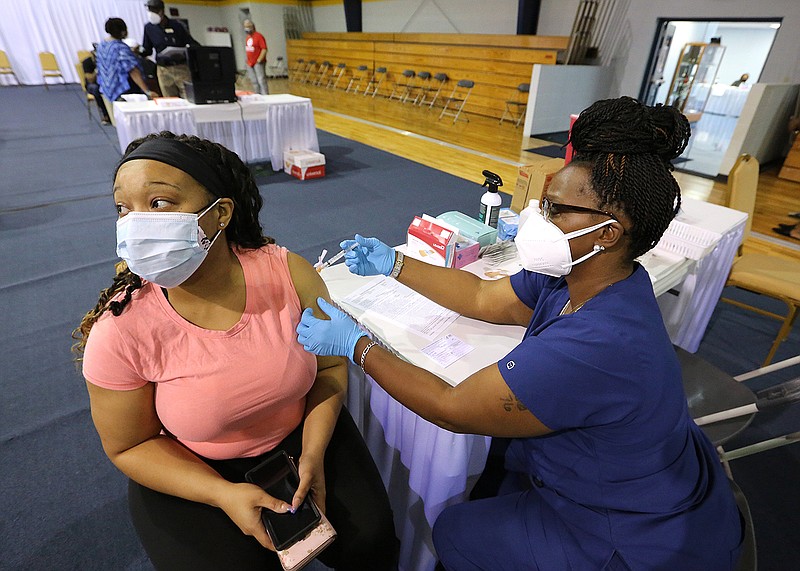 After rising for two weeks, Arkansas' allotment of coronavirus vaccine for people who have not yet received a shot is expected to drop by a third next week due to a reduction in the number of Johnson & Johnson doses coming into the state.

The state's allocation of the single-shot vaccine more than doubled this week, to 43,500 doses, but it will plummet to 5,200 next week, according to the U.S. Centers for Disease Control and Prevention.

The drop comes after reports last week that a manufacturing error at a plant in Baltimore caused 15 million doses of the vaccine to be discarded, halting production while the U.S. Food and Drug Administration investigated the matter.

As they struggle to fill appointment slots for the two-dose Pfizer and Moderna vaccines, pharmacists have reported that some customers have been holding out for the Johnson & Johnson vaccine, which has been in shorter supply.

State Epidemiologist Jennifer Dillaha said she hasn't heard how much of the Johnson & Johnson vaccine, made by the company's Janssen Pharmaceutical unit, the state will get after next week.

"I'm hoping that people will not delay getting vaccinated in order to get a preferred vaccine," she said.

"We have plenty of Pfizer vaccine, for example, and it takes just three weeks to get both doses, so a person could get both of those doses by the time we might get an increase in the Janssen vaccine."

News of the reduced allocation came as the state's count of coronavirus cases rose by 244 -- the first daily increase in three days that was bigger than the one a week earlier.

After rising a day earlier, the number of people hospitalized in the state with covid-19 fell by two, to 150.

The state's death toll from the virus, as tracked by the state Department of Health, rose by seven, to 5,660.

"With COVID-19 cases increasing in other states, we are in a race to get everyone vaccinated," Gov. Asa Hutchinson said in a statement. "This is the key to victory. If you are over 16, let's get the dose."

While Arkansas' allotment of Johnson & Johnson vaccine will go down next week, the amount of Pfizer vaccine it receives will slightly increase.

The state is expected to get enough of that vaccine to provide initial doses to 40,950 people, an increase of 1,170 over the amount the state was allocated for this week.

The state will also get 30,200 initial doses of the Moderna vaccine, the same amount it was allotted for this week.

Those amounts don't include additional doses that are allocated directly to many pharmacies, including ones located in many Walmart and Kroger stores, through a federal program.

Pharmacists have listed convenience, a familiarity with the company and the more traditional technology used to make the vaccine as reasons some customers prefer the Johnson & Johnson shot.

From a medical standpoint, Dillaha said, the only reason for people to wait for Johnson & Johnson is if they're allergic to one of the ingredients in the Pfizer and Moderna shots.

"All three vaccines work really well in preventing severe disease, keeping people out of the hospital, and keeping people alive if they're unlucky enough to actually get covid," she said.

Including second doses of Pfizer and Moderna vaccines, an average of more than 26,500 doses a day were administered in Arkansas in the seven-day span ending Wednesday, up from an average of less than 23,500 a day the previous week.

As the state's vaccine supply has increased, however, providers have increasingly reported difficulty using up their Pfizer and Moderna doses.

Vaccinations are "slowing up," Michael Butler, who owns several pharmacies around the state, said.

"I'm hearing that from everybody. It's hard to find people to receive the vaccines right now."

While his stores have received mostly Pfizer and Moderna, they received 1,000 doses of Johnson & Johnson this week, which they will use to hold clinics in southwest Arkansas over the next few weeks.

In Little Rock, CHI St. Vincent Community Care-East Clinic was ready to give at least 1,500 Pfizer shots at a walk-up event on Saturday, but it only administered 830.

All but 113 were second doses for people who received their initial shots at the facility's first walk-in clinic, on March 13, CHI St. Vincent spokesman Joshua Cook said in an email.

"I'm afraid I don't have any analysis, but the ministry is thrilled to vaccinate as many people as possible," Cook said.

The Northwest Arkansas Council, a business group, had plans to administer 2,500 Pfizer doses at a weekly clinic on Wednesday in Fayetteville but ended up giving less than half that amount.

A council spokeswoman said 1,052 people had signed up to receive shots at a similar event at J.B. Hunt's headquarters in Lowell today. A spokesman previously said 2,500 doses would be available at the event.

Benton County Emergency Management Director Michael Waddle said about half the appointment slots for a weekly, 1,000-dose Pfizer clinic at the county fairgrounds scheduled for Wednesday of next week had yet to be filled.

That was in contrast to the first two clinics of the series, when the available appointments were filled within a day. Organizers began taking appointments for next week's clinic early last week.

"I think all those ones that are absolutely on board and are really looking for it, they found it and they're getting it," Waddle said.

"Now what you have are those folks that have been sitting on the fence."

At the University of Arkansas for Medical Sciences' vaccine clinic in Little Rock, which also offers the Pfizer vaccine, about 100 of the 600 available appointment slots each day have been going unfilled, university spokeswoman Leslie Taylor said.

UAMS is also helping with a mass clinic planned for Saturday at Simmons Bank Arena in North Little Rock, where organizers are hoping to give shots to 1,000 people, Taylor said.

About 400 people had signed up for appointments at the event as of Wednesday, she said.

While UAMS encourages people to make appointments, she said, it will take walk-ins at its regular clinic as well as at the North Little Rock event on Saturday.

According to the CDC, the number of Arkansans who had received at least one vaccine dose rose Wednesday by 13,392, to 881,099, representing 29.2% of the state's population.

Among the states and District of Columbia, Arkansas continued to rank 43rd in the percentage of its residents who had received at least one vaccine dose and 46th in the percentage who had been fully vaccinated.

Nationally, 33.1% of people had received at least one vaccine dose, and 19.4% were fully vaccinated.

Dillaha said all the deaths reported Wednesday happened within the past month.

The number of the state's virus patients who were on ventilators fell by six, to 20, reaching a new low for the year.

After declining for two days, the average number of cases added to the state's tallies each day over a rolling seven-day period rose from 154 as of Tuesday to 158.

That was up from its low this year of 151 during the seven-day span ending Friday.

"I'm a little bit concerned that we may actually start trending up," Dillaha said.

"Other states have started to trend up, and Arkansas is usually a few weeks behind the more populous states in terms of our trend."

Unless the pace of vaccinations accelerates further, she said, it's possible for new infections to climb back to the levels they reached in mid-January, when the number hospitalized with covid-19 rose above 1,300.

"We need to increase the proportion of adults vaccinated as well as be able to provide vaccinations to adolescents and children to prevent that kind of spread and illness," Dillaha said.

Currently, the Pfizer vaccine is authorized for people 16 and older, while the Moderna and Johnson & Johnson vaccines are allowed for those 18 and older.

Dillaha said she's hoping the FDA authorizes the Pfizer vaccine for younger children by this fall.

The cases that were added to the state's tallies on Wednesday included 126 that were confirmed through polymerase chain reaction, or PCR, tests.

The other 118 were "probable" cases, which include those identified through less-sensitive antigen tests.

The number of cases that were considered active rose by 47, to 1,649, as new cases outpaced recoveries.

Among prison and jail inmates, the Health Department's count of cases rose by one.

Among nursing home and assisted living facility residents, the state's count of virus deaths rose by one, to 2,066.

The number of the state's virus patients who have ever been on a ventilator remained unchanged at 1,592.