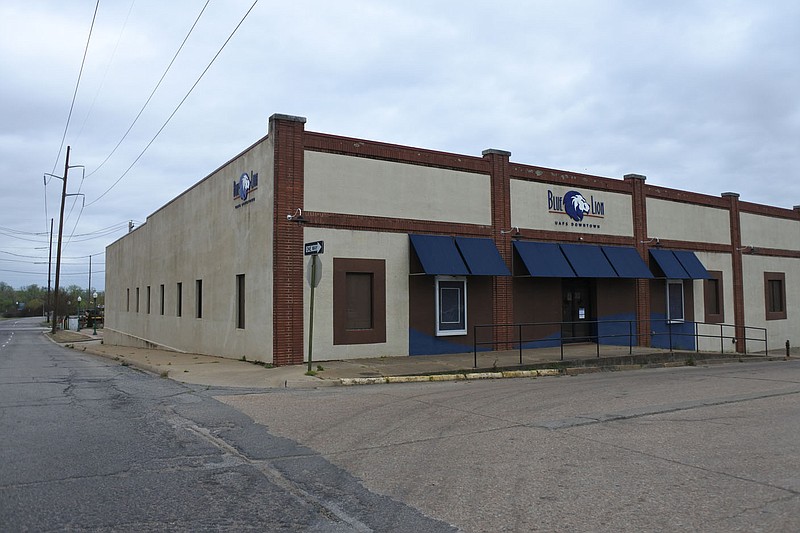 The Blue Lion at UAFS Downtown at 101 N 2nd St. in Fort Smith as seen on Tuesday. (NWA Democrat-Gazette/Thomas Saccente)

FORT SMITH -- The city has put down money to assume the University of Arkansas-Fort Smith's lease for a downtown venue at which it can hold public meetings.

City directors voted 6-1 to approve a lease for the Blue Lion at UAFS Downtown with the University of Arkansas System during its meeting Tuesday.

The board also approved spending $118,022 from each of the city's operating funds for the lease and operation of the facility for this year as a public meeting space. At-Large Position 7 City Director Neal Martin cast the dissenting vote.

The city administration had been looking for a place to hold city meetings, including those for the Board of Directors and Planning Commission, as well as administrative staff meetings following the pandemic, Deputy City Administrator Jeff Dingman wrote in a memo. The Blue Lion, at 101 N 2nd St., could also be used as office space for Fort Smith Convention & Visitors Bureau staff and storage.

The city began holding meetings, including Board of Directors meetings, at the convention center following the onset of the pandemic in March 2020. Before, board meetings were held at the School District's Service Center, where the district's School Board meets, while board study sessions were held at the Fort Smith Public Library.

Dingman said before Tuesday's meeting the city doesn't want to continue meeting in large rooms in the convention center OVG Facilities manages and could rent out for things such as events and exhibits. The Blue Lion has 10,000 square feet of space on its first floor and an 8,000-square-foot basement.

"It's designed with a stage-type area, with a little bit of backstage with some meeting rooms and whatnot, but also a good-sized audience area to where it would fit most of our public meetings," Dingman said.

"Another thing that we might do is be able to set up a permanent sound system and audio-video equipment to be able to more easily televise or livestream, and definitely record, our public meetings that are all held in that space. If we have our own space that doesn't have to be converted for every meeting like [the convention center] does or even like we had to do at the school service center, then that's more ideal to that type of function."

The Blue Lion is owned by the Central Business Improvement District and leased to UAFS, according to Dingman. UAFS informed the district in January it no longer needed the facility.

UAFS Chancellor Terisa Riley said Tuesday the university didn't use the Blue Lion space enough to warrant the expense of its lease. It has used the facility as a venue to host certain events, with university groups and organizations being able to hold meetings and gatherings there as well.

A UAFS budget subcommittee that studied the use of the facility and expenses recommended discontinuing the lease and using the money for the UAFS Center for Economic Development. Riley accepted the recommendation, with the center to open in the Bakery District at 70 S. Seventh St. in downtown this October.

"By investing instead into the Bakery District, we will be able to bring our business development services to the region in a space where they make the most sense, where family business owners, entrepreneurs, and small business leaders can form synergistic relationships and grow together to benefit the River Valley," Riley said.

Riley said UA trustees approved a request to lease and improve about 10,000 square feet of space at the Bakery District on Dec. 15. The UAFS Center for Economic Development, which is intended to offer a variety of services, will house the university's Center for Business and Professional Development and Family Enterprise Center, as well as a new regional office of the Arkansas Small Business and Technology Development Center.

Construction of the project began early this year.

The Central Business Improvement District Commission approved letting UAFS assign the lease for the Blue Lion to the city during a special meeting Tuesday morning.

The lease between UAFS and the Central Business Improvement District for the Blue Lion dictates a rent of $5,408 per month for 15 years. Dingman wrote it also grants UAFS the option to purchase the property for $10 at the end of the term.

Dingman wrote, in addition to authorizing the lease, the resolution commits the city to paying a $10 assignment consideration fee and the $5,408 monthly rent beginning in April. The lease will end in 2027, by which point the city will have made 73 payments totaling $394,784 and could purchase the building for $10. An appraised value of $553,589 was set on the property in 2020.