OPINION | REVIEW: 'Mutropolis' is a good game to watch on YouTube 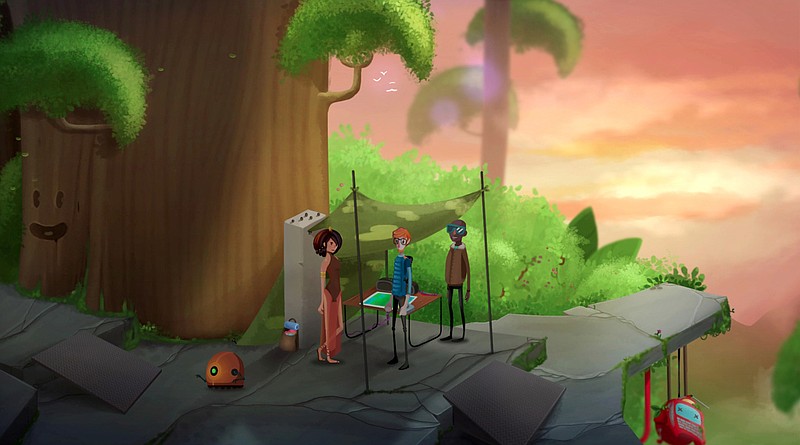 A scene from the video game "Mutropolis." (Application Systems Heidelberg)

Here are some facts I gathered from textbooks printed 3,000 years in the future: roses were once used as projectile weapons to repel opera singers; Al Capone was either a quiz show host or a celebrated actor; Leonardo da Vinci's Vitruvian Man was the first 16th-century underwear model; Jane Austen is best remembered for, among other works, the novel "Clear and Present Danger"; and Frida Kahlo, as evidenced from her many portraits, was a queen who ruled over several continents.

I acquainted myself with these historical coordinates in the video game "Mutropolis" while helping Henry Dijon, a kindhearted archaeologist from Mars, investigate the mysterious disappearance of his boss who was abducted while leading an excavation in a cave on the planet Earth.

Although one might reasonably think of Henry and his fellow co-workers as Martians, they're really just gainfully employed people who have returned to humanity's old home world to investigate the remains of civilizations that flourished before a cataclysm sent mankind scurrying to the Red Planet. Henry's boss, Totel, regales his team with his belief that the Earth holds a place where the bones of long-extinct, giant, prehistoric creatures ("dinotaurs") were once kept on display. Totel's name for this citadel of knowledge is Mutropolis.

As much as Henry respects his boss, he is skeptical about the reality of "Mutropolis." However, after he discovers a hidden wall in a cave that leads to a mural with the faded letters TROPO on it, he and colleagues begin to wonder if their leader might be onto something.

To the antediluvian eyes of 21st-century people, the mural seems to also depict a bit of the New York skyline, but such knowledge is lost on the Martian academics. Alas, they have little time to contemplate their momentous finding before their lighting equipment fails and, in the ensuing darkness, they are set upon by an assailant who knocks Henry out, kidnaps Totel and defaces the mural.

After Henry comes to, he returns to the laboratory station that serves as the headquarters for the expedition to piece together the circumstances surrounding his boss' kidnapping. Over the course of his investigation he befriends the goddess Isis, who is keen on preventing her brother Seth (Totel kidnapper) from performing a blood rite that will lead to humanity's eternal enslavement.

"Mutropolis" is a point-and-click game that, for better or worse, harks back to classics of the genre from the 1980s and 1990s. It is well written — stuffed with a number of lol-worthy gags — and nicely animated, but I can't say I enjoyed playing it. Similar to a number of point-and-click games from back in the day, like "Grim Fandango," it's filled with puzzles that turn on abstruse logic.

This is one of those games where you are likely to be diving into your inventory constantly and using items in a haphazard fashion to solve obscure puzzles.

For example, to build a lockpick you need to buy a turnip from a vending machine and take it to a cage where an unseen animal lives in a lab room. After feeding it the turnip you must hand it a paper clip and ask it to fashion a heart, and after it hands it to you, give it back to the critter and ask it to flatten it to get the shape that you need for a lockpick.

When I looked up the solutions to several puzzles in an online guide, I didn't think: "Oh, that's clever, I should have mulled over that puzzle a bit more," so much as: "My time is worth more than the effort it would have taken me to arrive at this, that, and the other."

I'm not ashamed to say that my appreciation of "Mutropolis" skyrocketed when I gave up playing it and decided to watch the last fourth of the game on YouTube.

Watching "Mutropolis" as I might an Adult Swim cartoon, I was able to appreciate it as a solid comedic work without having to suffer through trying to independently work through its puzzles. For me, "Mutropolis" was a game best savored as a passive experience.

Print Headline: 'Mutropolis': A game to watch on YouTube