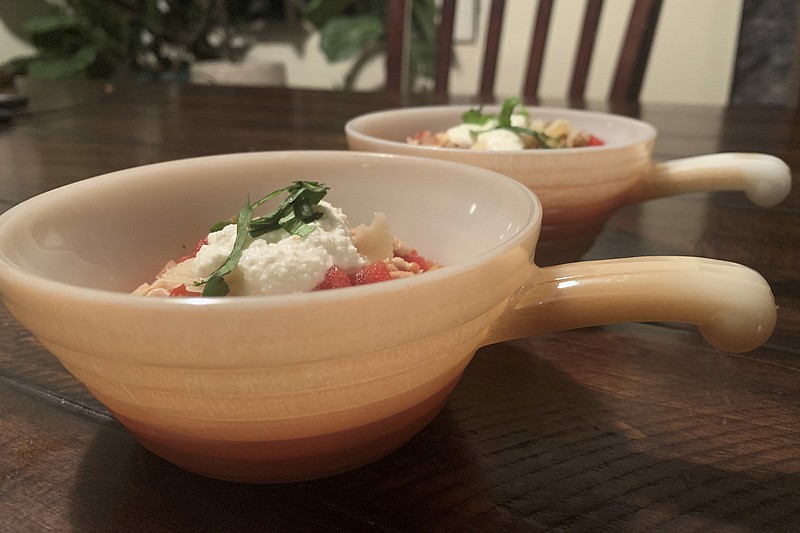 Two vintage peach lustre Fire King chili bowls sit atop a table. There are lustrous chili bowls with handles, stackable refrigerator boxes, and casserole dishes set on top of brass candle warmers. These are durable dishes, often smaller than modern serving pieces, that can go from freezer to oven to table. But collectors usually acquire them for enjoyment, not utility. (Tracee Herbaugh via AP)

If you want to freshen up your kitchen, look no further than Grandma's old casserole dishes.

Vintage kitchenware is back in style — pieces from the mid-20th century painted with flowers, bright colors, and specific functions, such as bracketed chip and dip bowls or four-piece refrigerator storage sets.

"I've always been an old soul and loved anything old," said Megan Telfer, a collector of vintage dishes, salt and pepper shakers, cookie jars and "a little bit of everything." The 26-year-old parole officer from the Dallas area said this hobby started with family.

Her grandmother gave her mother a green and white Pyrex "Spring Blossom" mixing bowl. "That's when my interest was piqued," Telfer said.

Three years later, she has more than 300 pieces of vintage Pyrex displayed on three large bookcases. Her 5-year-old daughter has some vintage Pyrex, too.

Some collectors buy vintage dishware to try to resell it at a profit, while others are in it for nostalgia.

"It reminds them of their mothers, aunts, grandmothers," said Hope Chudy, owner of Downstairs at Felton Antiques in Waltham, Mass.

A year of pandemic lockdowns has led to a surge in home cooking and time spent hanging out in the kitchen. Vintage cookware fits right into that homey, old-fashioned vibe.

There are lustrous chili bowls with handles and casserole dishes set on top of brass candle warmers. These are durable dishes, often smaller than modern serving pieces, that can go from freezer to oven to table. But collectors usually acquire them for enjoyment, not utility.

"It really sets your kitchen apart from others," said Victoria Aude, an interior designer in Canton, Mass. "It's not an item you can just buy off the shelf at Bloomingdale's."

The old dishes are also nice accents when decorating a room, said Atlanta-based interior designer Beth Halpern Brown. "They can add that quick pop of color," she said. "You can decorate a wall with them or put one on display and change the space."

Corning first released a Pyrex dish in 1915. By the 1930s, Anchor Hocking Glass Corp. released its competitor brand Fire-King. But it's the kitchenware made between 1950 and 1980 that seems to be most popular right now.

This image shows one area of vintage dishes for sale at “Downstairs at Felton Antiques” in Waltham, Massachusetts. Some collectors buy vintage dishware to try to re-sell it at a profit, while others are in it for nostalgia. (Tracee Herbaugh via AP)

The mid-20th-century glass bowls and casserole dishes from brands like Fire-King and Pyrex haven't changed, but their prices have.

"The more people that collect, the higher the demand is [and] the more people [who try] to source the right goods to be able to feed that request," said Stan Savellis, 42, of Sydney, who has collected vintage kitchenware since his teenage years and runs the online store That Retro Piece.

And then there's social media too, said Vicki Matranga, the design programs coordinator for the International Housewares Association and author of the book "America at Home: A Celebration of Twentieth-Century Housewares."

In pre-pandemic days, vintage collectors would meet up at swaps. Now, people are buying and selling on eBay, Etsy, Facebook and other websites.

The rarest pieces have sold for thousands of dollars, such as the 1959 "Lucky in Love" covered casserole dish that Goodwill sold for $5,994 in 2017.

Still, some enthusiasts simply like the vintage look and sentimentality.

"It goes with my house," said Ashley Linder, 37, of Lake Jackson, Texas.

Linder's vintage collection includes can openers from the 1950s, and they still work. "Fortunately, I have the space to display most of it, though some are seasonal-use," she said.

One of her most treasured finds was a Pyrex "Pink Daisy 045" casserole dish on eBay. It was in great condition, still in the box.

"You don't come across a lot of pink pieces in the box," she said.

She paid $300 for it and messaged the seller in hopes of finding out how it was so well preserved. "The lady had bought an old farmhouse in Nebraska, and it was left there," she said. "It's an investment."