Attacks have yet to cease in Iraq

Nation on notice U.S. Embassy will close if violence persists by SAMYA KULLAB AND MATTHEW LEE THE ASSOCIATED PRESS | September 29, 2020 at 4:00 a.m. 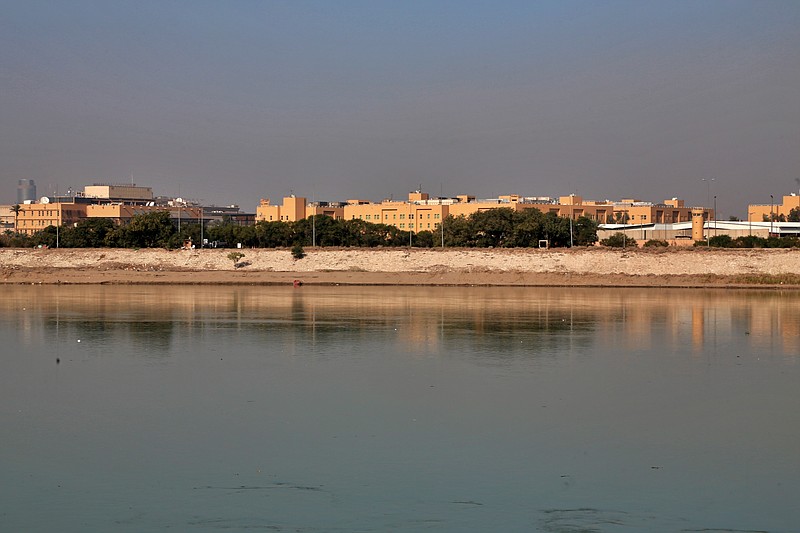 FILE - The U.S. Embassy is seen from across the Tigris River in Baghdad, Iraq Jan. 3, 2020. The Trump administration has signaled it could close its diplomatic mission in Baghdad if measures are not taken to control rogue armed elements responsible for a recent spate of attacks against U.S. and other interests in the country, Iraqi and U.S. officials said Monday, Sept. 28, 2020. (AP Photo/Khalid Mohammed, File)

BAGHDAD -- As news of the warning of a potential U.S. Embassy closing was reported in Baghdad on Monday, Iraq's military said a Katyusha rocket hit near the city's airport, killing five Iraqi civilians and severely wounding two others.

The rocket may have been targeting the international airport but struck a residential home close by instead, Iraqi security officials said, requesting anonymity in line with regulations.

The Trump administration has warned Iraq that it will close its embassy in Baghdad if the government does not take swift and decisive action to end persistent rocket and other attacks by Iranian-backed militias and rogue armed elements on American and allied interests in the country, U.S., Iraqi and other officials said Monday.

A U.S. official said the administration's warning was given to both Iraq's president and prime minister but that it was not an imminent ultimatum. The official was not authorized to discuss the matter publicly and spoke on condition of anonymity.

The warning signals the administration's increasing frustration with rocket fire from Iranian-supported groups on or near the vast U.S. Embassy compound in Baghdad as it steps up pressure on Iran with the reimposition of crippling sanctions. However, closing the embassy and withdrawing U.S. personnel from Baghdad would signal a significant retreat from a country in which successive administrations have invested massive amounts of money and lives.

The threat to evacuate the embassy, which has stoked concerns in Baghdad of a diplomatic crisis, was first delivered to President Barham Saleh on Sept. 22 in a phone call with Secretary of State Mike Pompeo, Iraqi officials said. Pompeo then repeated the warning to Iraqi Prime Minister Mustafa al-Kadhimi on Saturday, the officials said.

Pompeo told Saleh that if the U.S. presence continues to be targeted, measures would be taken to close the embassy and a "strong and violent" response would follow against the groups responsible for the attacks, according to three Iraqi officials with knowledge of the call.

Pompeo went further with al-Kadhimi on Saturday, telling the prime minister that the U.S. will initiate plans to withdraw from the embassy, according to the Iraqi officials who spoke on condition of anonymity in line with regulations.

An official announcement has not been made by the Americans. But the Trump administration has not been shy about expressing its anger and concern about continuing rocket attacks by Iranian-backed groups on or near the embassy compound.

In a tangible sign of a strain in U.S.-Iraq relations, the State Department shortened an Iran sanctions waiver deadline by 60 days last week. The previous waiver, crucial for Iraq to import badly needed Iranian gas to meet power demands, gave the government 120 days.

Without the waiver, Iraq would suffer crippling sanctions barring it access to U.S. dollars.

Despite comments from U.S. officials that a deadline on closing the embassy is not in place, Iraqi officials appeared to be under the impression they have until the waiver expires in two months to take action.

"America will observe what measures the government of Iraq takes within two months," one senior Iraqi official said. During this time, al-Kadhimi's administration must halt the targeting of foreign missions, military installations and logistics convoys destined for the U.S.-led coalition, or else "aggressive" action would follow, the official said.

Al-Kadhimi, Saleh and Parliament Speaker Mohamed al-Halbousi held a meeting late Sunday in which all three leaders said they supported measures to bring arms under the authority of the state and to prevent the targeting of diplomatic missions.

Diplomats were told the U.S. had already started the process of closing but would "reevaluate while progressing," one Western official said, suggesting the decision was reversible if security inside the Green Zone improved.

The State Department declined to comment on the calls between Pompeo and Iraq's leadership, but said the U.S. will not tolerate threats.

"We have made the point before that the actions of lawless Iran-backed militias remains the single biggest deterrent to stability in Iraq," the department said. "It is unacceptable for Iran-backed groups to launch rockets at our embassy, attack American and other diplomats, and threaten law and order in Iraq."

Information for this article was contributed by Qassim Abdul-Zahra of The Associated Press. 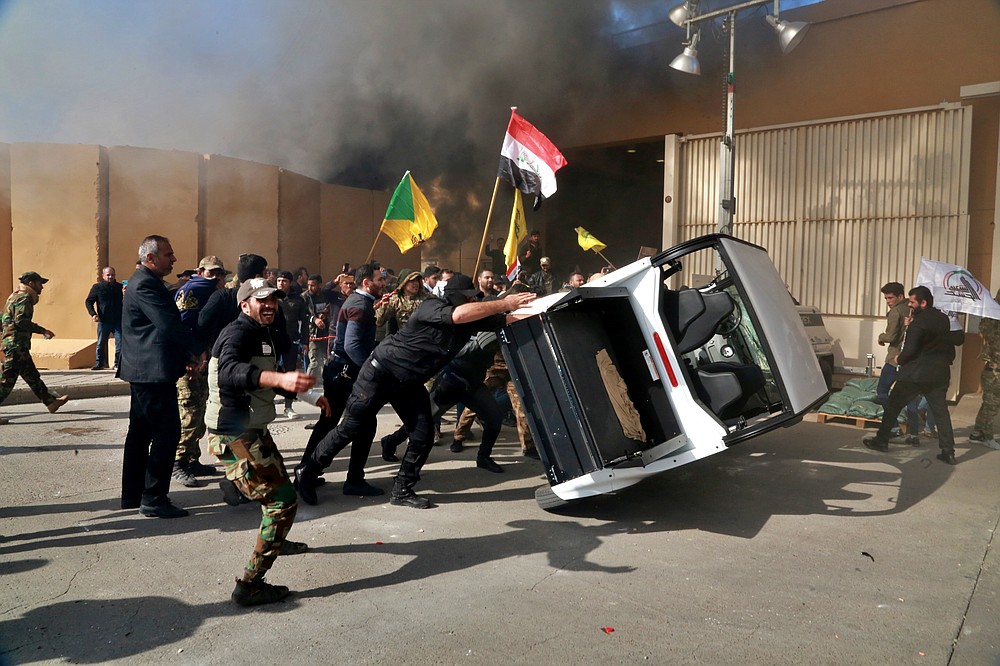 FILE - In this Dec 31, 2019 file photo, pro-Iranian militiamen and their supporters damage property inside the U.S. embassy compound, in Baghdad, Iraq. The Trump administration has signaled it could close its diplomatic mission in Baghdad if measures are not taken to control rogue armed elements responsible for a recent spate of attacks against U.S. and other interests in the country, Iraqi and U.S. officials said Monday, Sept. 28, 2020. (AP Photo/Khalid Mohammed, File)
ADVERTISEMENT