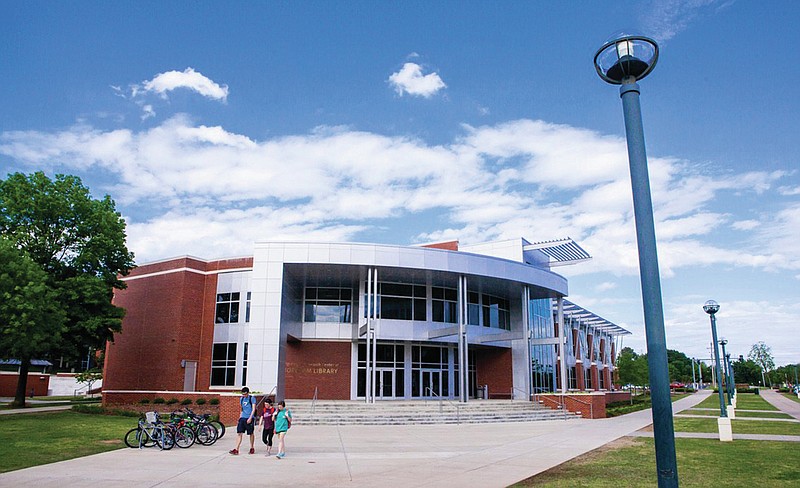 Students walk past the UAFS Boreham Library on the UAFS campus. The quarter cent Sebastian County sales tax enabled UAFS to complete the Boreham Library Renovation ($769,638) and the purchase of Library Volumes ($927,448) in addition to numerous other capital improvements and upgrades to support 4-year degree offerings.

FORT SMITH -- The question of whether the University of Arkansas at Fort Smith will continue to receive revenue from a sales tax will be answered in a special election on Nov. 3.

Sebastian County voters will decide on whether to extend a 0.25% sales tax for 10 years. Of the 1.25% county sales tax, 0.25% goes toward UAFS. The county tax is included in Fort Smith's current tax rate, which is 9.75% when the 6.5% Arkansas and 2% city sales taxes are taken into account, according to the city's finance department.

This special election comes at a time when Fort Smith residents have seen an increase in taxes and fees on several fronts. City officials signed a consent decree in 2015 with the U.S. Environmental Protection Agency, the Department of Justice and the state. The city agreed to make an estimated $480 million in repairs and upgrades to its wastewater system over the course of 12 years to clear up chronic violations of the federal Clean Water Act, and to aid in fulfilling these requirements, it raised its sewer rates by 167% from 2015-17.

In May 2018, residents of Fort Smith and Barling approved a millage increase to fund projects in the Fort Smith School District. The increase, which moved the school district property tax rate by 5.558 mills from 36.5 to 42.058, will generate about $120 million. It was the first millage increase in Fort Smith since 1987.

The Quorum Court voted May 26 to approve an ordinance calling the special election. It states that before the sales tax, between 1965 and 2001, Sebastian County voters supported UAFS, and its predecessor Westark College, through property taxes.

UAFS Chancellor Terisa Riley held an online "Chancellor Chat" concerning the sales-tax extension on Zoom on Monday. Riley said that when the sales tax was first approved by voters, the university promised to offer more bachelor's degrees than the six it was offering at the time and to have the types of facilities, as well as the maintenance and operations of those facilities, that would support those four-year degree programs.

Rachel Putman, associate director for strategic communications at UAFS, said the following are major capital projects and improvements funded by the revenue UAFS received from the sales tax that were in support of the university offering four-year degree programs:

The university offers 42 bachelor's degrees for the 2020-21 academic year, according to UAFS registrar Wayne Womack.

Riley said UAFS continues to offer certificates and associate degrees, in addition to two master's degrees. According to Putman, the university has awarded a total of 13,503 credentials/degrees within the past 10 years, with 6,969 bachelor's degrees awarded during that time.

The extension, according to Riley, is to keep a level amount of tax that UAFS has been collecting. Among the things that the university is working on include creating national centers of excellence, academic planning and strategic enrollment management planning.

Riley said UAFS takes in, on average, about $6 million per year with the sales tax. This constitutes about 8% of the university's annual budget.

"You could imagine, particularly in a time when we're already grappling with the potential of budget cuts or reductions in our allocations from the state, it's really concerning, overall, that we might have any kind of a reduction to the resources available," Riley said. "Despite how difficult things have been for us during our pandemic, UA Fort Smith has been completely committed to continuing to be affordable. We've not raised any of our tuition or fees. We also have not furloughed, or laid off, any of our employees."

Riley said her concern is that, if the university does not have the revenue from the sales tax over the next 10 years, some of the maintenance and operations of the campus, as well as some of the capital assets, will not be maintained at the level that they have, and the university will have to make some "very strategic cuts." An increase of the university's tuition and fees is another potential outcome.

"If the tax is not extended, and let's say we didn't do anything else to cut our actual expenses, then truly, for our students, that could be up to a $600 per semester increase that they would see if they had to make up the entire difference," Riley said. "These are just our students who are tuition and fee paying students, so, understandably, that's not the only strategy that we would utilize."

The university also would be making, in Riley's words, "some pretty major decisions" about programs to cut, or individual positions that would not exist.

Mike Barr, chairman of Friends of UAFS, a group that supports the tax extension, said during Monday's chat that the funding UAFS would bring in during the 10-year window if this extension is approved is a significant resource the university needs to remain affordable.

"We want to make sure that our students that are coming to campus can graduate in a situation and be put in a position for success, changing their trajectory quite a bit, so we're really excited about getting to the finish line and seeing success," Barr said.

Any organized opposition to the sales-tax extension is currently unknown.

The Fort Smith Regional Chamber of Commerce sent out a survey in late July to both members and nonmembers that asked if they would vote to support the extension if they were voting that day, according to Tim Allen, president and chief executive officer of the chamber. Of the more than 200 people who participated, 85% voted yes while the remaining 15% voted no.