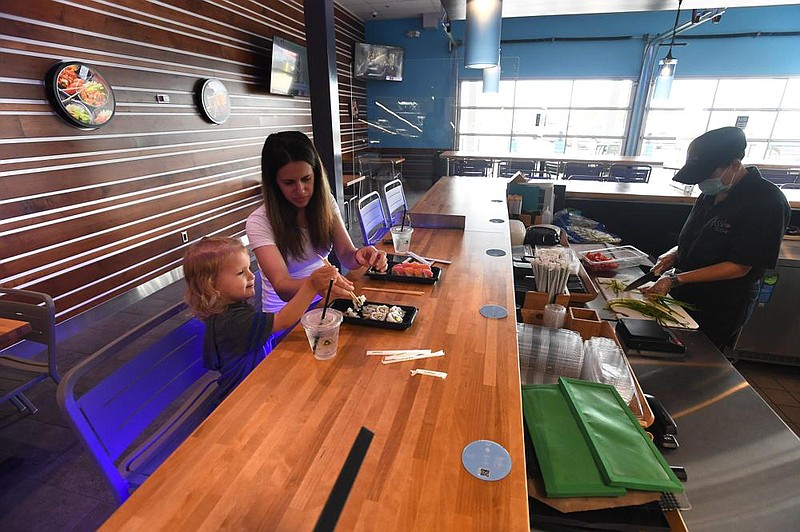 Kelsey Webster of Bentonville eats sushi with her daughter Natalie on Wednesday at the Hissho Sushi and Craft Beer Bar located in the Walmart store at Pleasant Crossing Boulevard in Rogers. (NWA Democrat-Gazette/J.T.WAMPLER)

The 2,000-square-foot location inside the Pleasant Crossing Boulevard Walmart store includes a sit-down restaurant and bar as well as takeout and plans are to eventually offer some delivery options. The location will feature craft beer from Bentonville-based Bike Rack Brewing Co., along with selections from other area craft brewers. It's expected to eventually employ about 20 hourly workers.

The format is the company's second sushi bar and craft beer bar combo -- it has a similar set up in a Meijer supermarket in Michigan. Other Hissho locations are typically partnered with a retail spot, like a grocery store deli, university, or hospital and offer fresh grab and go sushi made by a sushi chef on-site daily.

Hissho Sushi is based in Charlotte, N.C. and is the nation's second-largest franchise sushi chain, according to the company. It was founded in 1998 and has nearly 2,000 locations in 42 states.

"We think this is a dynamite location for us," John Golaszewski, director of nontraditional operations for Hissho Sushi, said regarding the Rogers operation.

The sushi spot in Rogers offers hot foods as well, including Asian chicken wings, boom boom shrimp and dim sum and a selection of craft beers, as well as wine. There are breakfast options, too, like avocado toast, acai bowls and smoothies.

According to IBIS World, the sushi restaurant industry, like the restaurant industry as a whole, is expected to take a hit in 2020 from reduced customer spending because of the covid-19 pandemic. According to data from the National Restaurant Association, the food service industry has lost $165 billion in sales for March through July, and could lose $240 billion by the end of the year, due to the pandemic.

Capacity at the Hissho Sushi and Craft Beer Bar in Rogers will be limited to 50% currently per covid-19 requirements and chairs and tables will be placed to adhere to social distancing requirements, according to the company. All employees will receive training on hand washing and sanitation requirements, be screened prior to their shifts, and be required to wear masks.

The dine-in area of the restaurant includes transparent partitions at the sushi bar seating area as well as at some of the larger table setups. The location also has patio seating.

In an emailed statement, Avani Dudhia, a Walmart spokeswoman, said the company is excited to bring the new Hissho Sushi and Craft Beer Bar to its customers in Rogers, adding that it will appeal to a wide variety of folks, from parents who need to pick up a meal after shopping to friends looking for a quick escape after work.

Jeff Charlson, co-founder of Bike Rack Brewing Co., said the company was eager to work with Hissho. Charlson said the brewer is working closely with Hissho to educate it not only about Bike Rack's products but also the whole Northwest Arkansas brewing scene. The beer offerings at the sushi bar will include brews from several other local craft beer makers.

Hissho's Golaszewski said the company is committed to featuring Northwest Arkansas brewers alongside its sushi and other menu items.

"You won't be able to by a Budweiser here," he said. 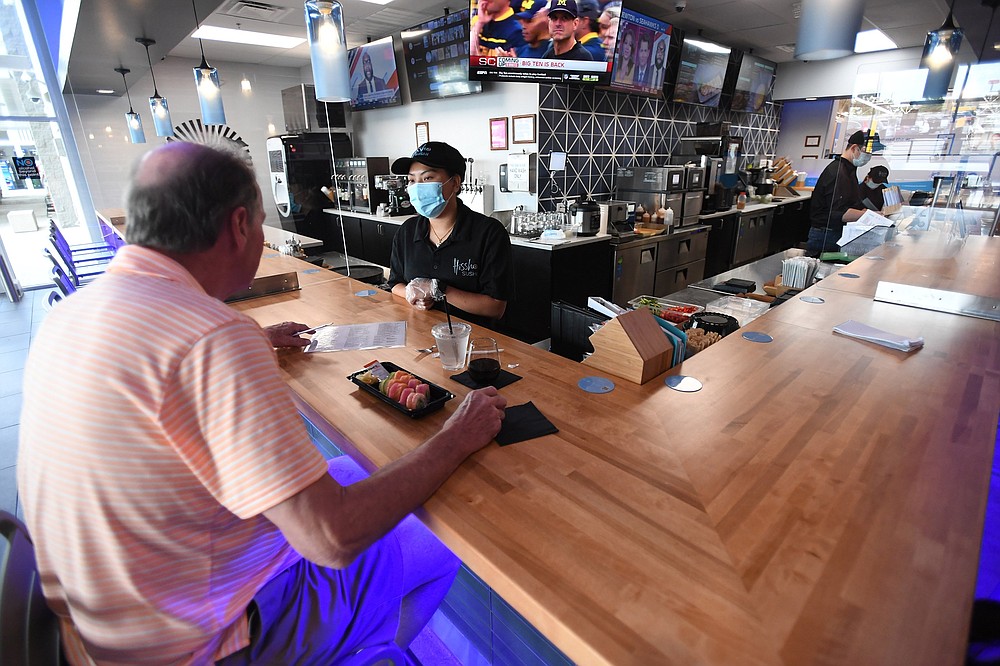