Is One The Loneliest Number? Art Ventures exhibit ponders product of pandemic 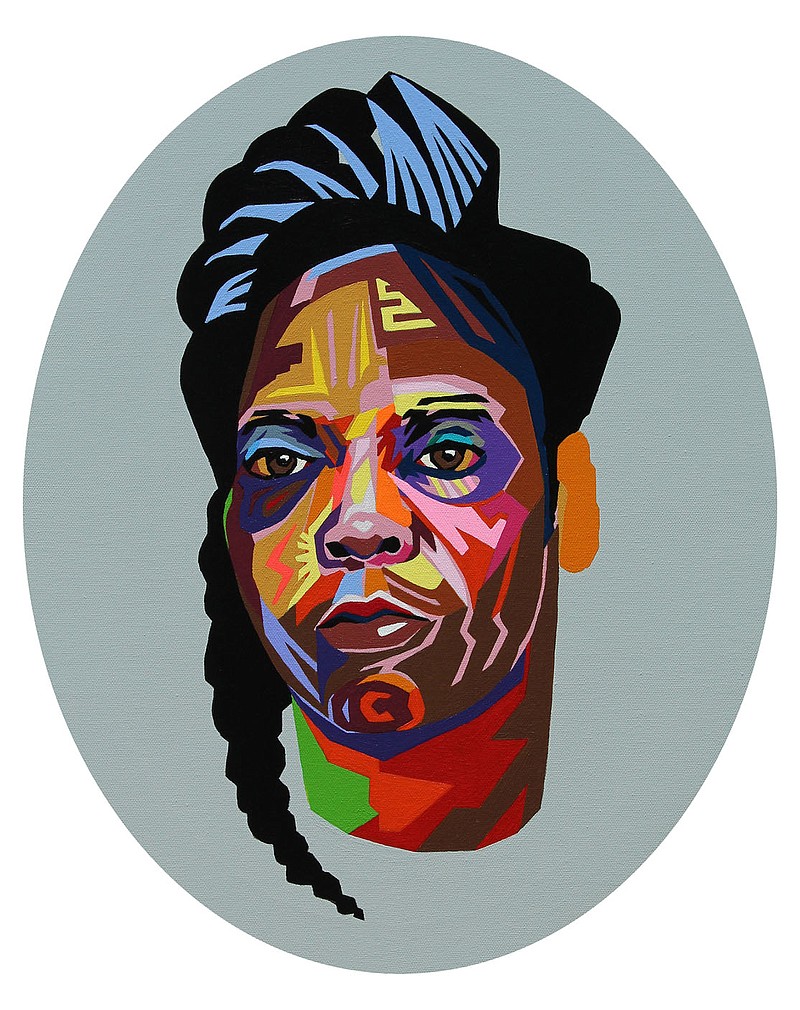 “Alleged Shapes No. 4” By Kim Brewer From the artist’s statement: Derived from “mug shots,” this body of work explores the relative frailty of the human condition in isolation and interrogates the mug shot as a platform for the perpetual captivity of the individual. Some individuals present themselves in defiance of their “captors,” while others are entirely consumed with their own intense set of circumstances; the varied expressions portrayed evoke images which are dynamic and often moving.”

The pandemic has not slowed the Northwest Arkansas artists' collective Art Ventures down a single bit: The busy organization closed "The Ways We See" in August, opened "The Shape of Our World" that same month and is now premiering "Isolation." It's a timely exhibition "about the complexities of limited human interaction" that asks the questions, "How much emotional connectivity do you need? How valuable is a hug or a touch of the skin? Does physical isolation become psychological isolation? How do you adapt to forced isolation?"

These are certainly questions that most of us find ourselves asking, and Art Ventures strives to give us some answers via the artistic output of Moh'd Bilbeisi, Kim Brewer, Margaret Correll, Ruth Lawlor and Erika Nelson. James Jackson, Art Ventures operations manager, says the exhibit was conceived by the organization's two University of Arkansas interns, Morgan Garner and Jordan Jones.

"We've amped up our intern program, and our goal is to make sure that we have our interns not only working for us, and getting gallery experience, but that they also have something they can take with them for whatever career they choose in the future," says Jackson. "We set it up so that they knew how to do an exhibition proposal, and 'Isolation' is one that they proposed. It was late in the semester, around April, when we were initially discussing it, and those were the early days of covid, not knowing what was going to happen, people completely isolated, not venturing out as much as they are now. So [Garner and Jones] wanted to have our artists give their perspective on their own isolation -- whether that was physical isolation or a disability that caused them to socially self-isolate, even in normal times."

"They provided the funding for it, and then we have an outreach person at the School of Art at the University, and our applicants come through them," explains Jackson. "Originally, there was only one position, but last semester we decided to divide it into two positions, which turned it into a more collaborative effort on their part, and it was a phenomenal success."

Art Ventures interns start out learning gallery basics, like how to write a press release, but eventually their training becomes more rigorous.

"We hoped that, with the incremental knowledge gained through the course of the semester, that, if we did that right, the interns would be able to come up with an exhibit proposal," says Jackson. "We hoped it would be something we could launch, and we were more than pleasantly surprised when our two interns put so much time and energy into it -- the success [of the proposal] even surprised us a little bit. [This exhibit] is the fruits of their labor -- it gives them something tangible and professional that will be out there for the public to see, and they can say, 'Look, I created this. I launched this exhibition.'"

"It was hard to focus on anything else," confesses intern Morgan Garner of conceptualizing "Isolation." "This proposal was written either the week everything got shut down or right after. Artistically, this hasn't really happened since Renaissance times, when there was a plague. ... Jordan and I started looking at artists who had been in isolation, either because of their abilities or systems in place that isolate people, as we continue to see how the pandemic shows the true colors of things like the health care system. ... Some of the work in the exhibit comments on the prison system -- these are ways we can get people to relate to this time that we're all going through. We want the people seeing the art to be inspired by it and, for the first time, if they haven't been able to relate to isolation, now they can develop a new way of perceiving this time in a creative sense.

"We were working on this simultaneously, but we weren't together -- we were all isolated, but collectively coming together to [create this]," she adds. "I think that's what art should do: Bring individual people together through those that are experiencing the same thing."

The exhibit is wholly online and can easily be accessed by pressing a button on the organization's website. The design is clean and pleasing, and melancholy music accompanies your tour through the artwork, which is supplemented by artists' bios and statements. That you can view the entire exhibit from the comfort of your own couch, dressed in pajamas -- and alone -- is strangely fitting for the theme.

Garner says her experience interning with Art Ventures has been incredibly valuable.

The feeling is mutual, says Jackson.

"These interns become permanent members of [the Art Ventures] family," he says. 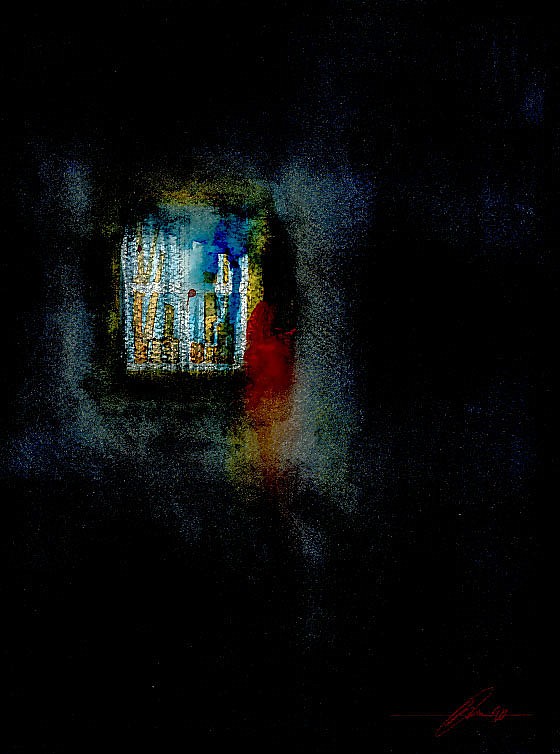 “Corona” By Moh’d Bilbeisi From the artist’s statement: “My work is about walking the fine line between the real and the unreal. The subject matter is a direct critique of what is propagated as being ultimately true and beyond doubt. Some of it, the topics, is historical, religious and political. All subjects are personal, and I see it as me sharing my view of what’s around and what’s inside.” 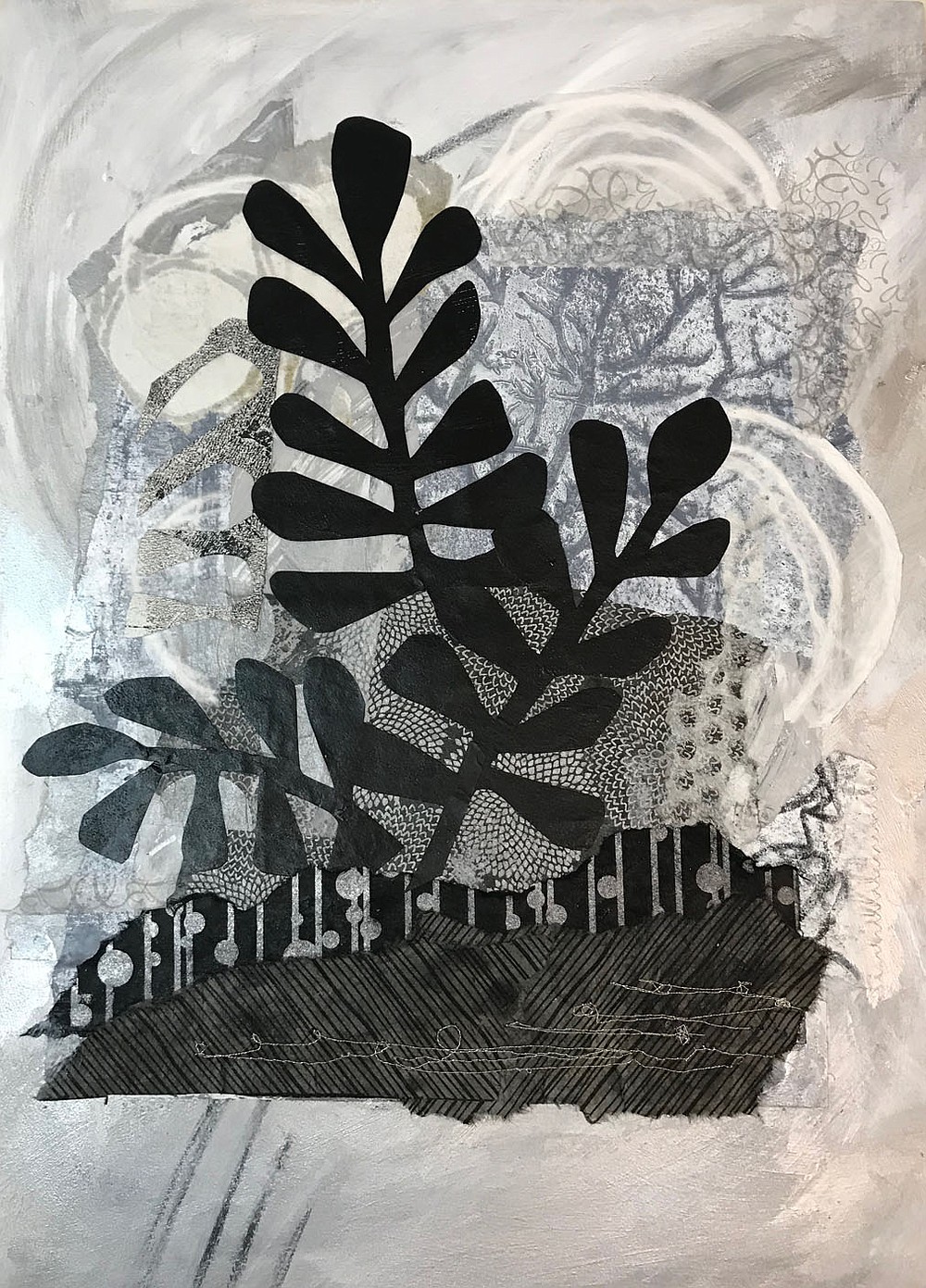 “Woodand Walk” By Ruth Lawlor From the artist’s statement: “I find beauty in simplicity, preferring to portray the essence of experience, the contemplative connection, the spiritual suggestion, rather than the literal. Nature can be expressed in ways other than what the eye perceives. My creative spirit is challenged and intrigued to communicate turbulence, balance and serenity through a line, a shape, a color or texture.” 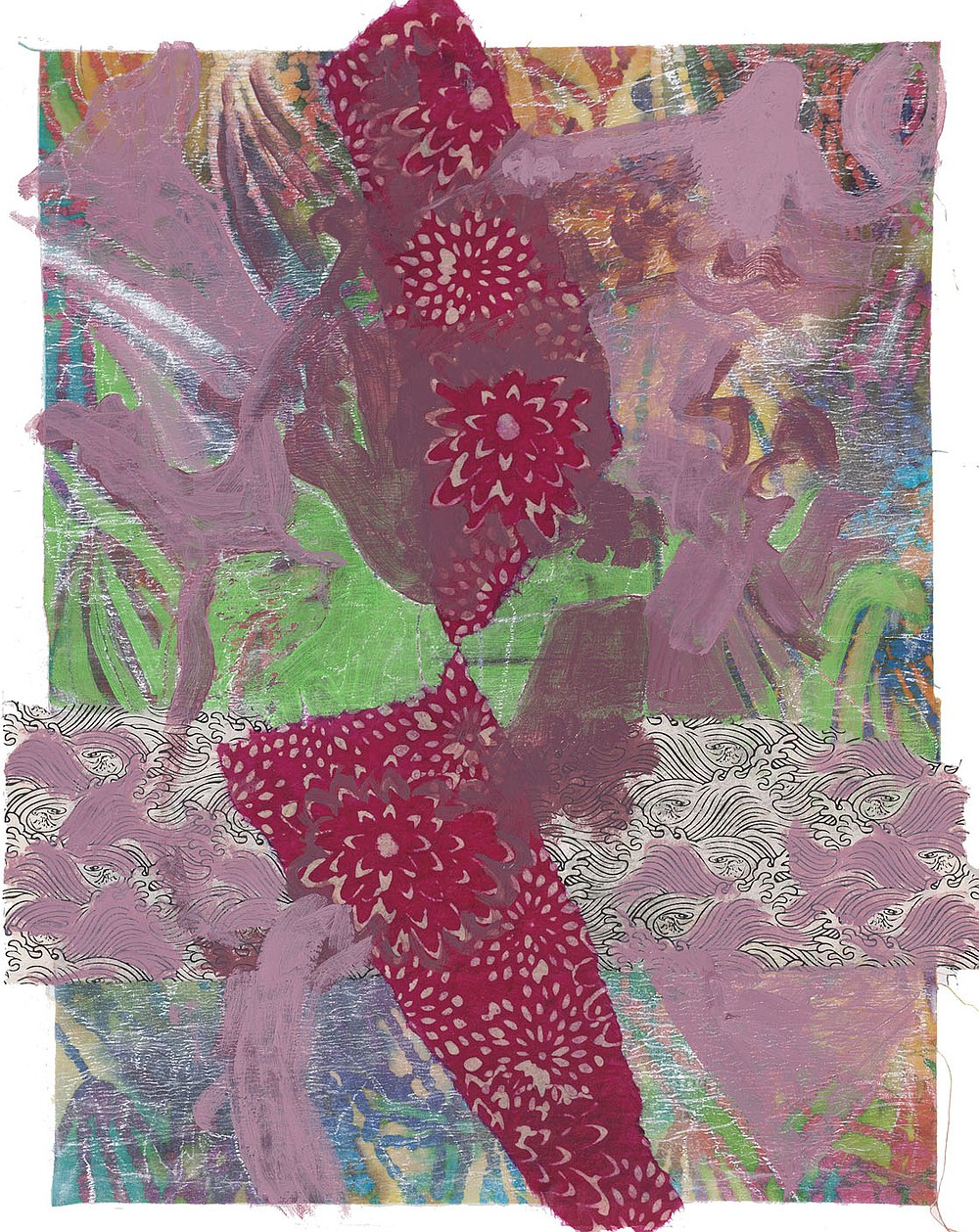 “Great Dream” By Margaret Correll From the artist’s statement: “My art has always been inspired and energized by poetry. A few of the poets that inspire me are John Asbury, John Donne, William Butler Yeats, Louise Bogan, Denise Levertov and May Sarton. Many lines of poetry written by these poets I have carried around in my head since the early ’70s. Poetry is passionate and thus influences my art. “Benevolence Against Themselves” includes a portion of a poem by John Donne.” 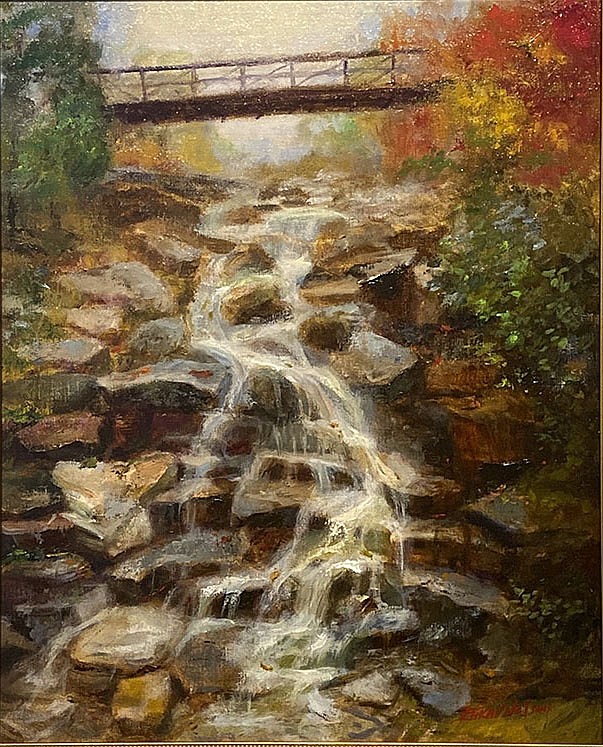 “After the Rain” By Erika Nelson From the artist’s statement: “I had polio when I was 6 months old, which paralyzed both legs and my upper right arm. Due to extreme polio, I developed an extreme case of scoliosis, and I use my motorized wheelchair daily. I graduated from a stroller to a wheelchair. Due to my physical limitations, I explore a lot of easels and other art tools that might better accommodate my wheelchair because I would really like to be able to work on larger pieces. My left arm is my painting arm, which also is my cooking, cleaning, bodily support, leg carrier and texter arm.”
More News

Moh’d Bilbeisi is a licensed architect, artist, author and Eminent Professor of Architecture at Oklahoma State University School of Architecture. He teaches design studio as an experiential and poetic artform that is compliant with environmental and technical considerations. In addition to the design studio, he lectures in the topics of graphics and theory of representation and history/theory of Islamic architecture. Professor Bilbeisi is a seasoned traveler and has taught, lectured and conducted graphic workshops both nationally and internationally. He has also taught at the Middle East Technical University in Turkey and the American University of Sharjah in the United Arab Emirates.

Kim Brewer was born in Fort Worth in 1981. Her work investigates social justice issues through a variety of mediums from pure painting to contemporary craft. She received her Master of Fine Arts in Drawing and Painting from Texas Woman’s University in 2015. Her work has been shown at various galleries in the South and has been reviewed in multiple publications including Urban Art and Antiques and Arkansas Made. Her work was recently selected for inclusion in the biennial state tour, “Arkansas Women to Watch 2021: Paper Routes.” She lives and works in Little Rock.

Margaret Correll was born in Pasadena, Calif., and lived in several other places while growing up. In 1996 she and her family moved to Bella Vista, where she currently resides. Correll has worked in many media but is presently working in mixed media and continuing to follow the evolution of her mixed media projects. She received her BFA from Minneapolis College of Art and Design, her MFA from Otis Art Institute and did a one semester studio art internship affiliated with the Whitney Museum in New York City.

A graduate of Wichita State University, Ruth holds a Master of Arts in Education and has taught art in public schools and universities and continues to work as an advocate of art education. Now a full-time artist, she exhibits her work in Northwest Arkansas and galleries in Kansas and Louisiana. She lives and maintains a studio on Beaver Lake near Garfield.

Erika Nelson lives in Bentonville and earned her BFA in drawing and painting from California State University in Fullerton. She is a freelance fine art artist as well as graphic artist and film editor. Nelson’s artwork has been featured on the cover of American Bar Association Quarterly and in 2018 she exhibited works in the World Art Exhibit hosted by the International Watercolor Society (Budapest, Hungary) and the Small World Show Aid for Cancer Research (Hope Forest, South Australia). Nelson has shown in multiple galleries in Southern California, and her artwork is collected by celebrities and corporations. Nelson is a member of Plein Air Painters of the Ozarks and Artists of Northwest Arkansas, where she received a 2019 signature award for her fifth juried artwork, titled “To Your Good Health.”