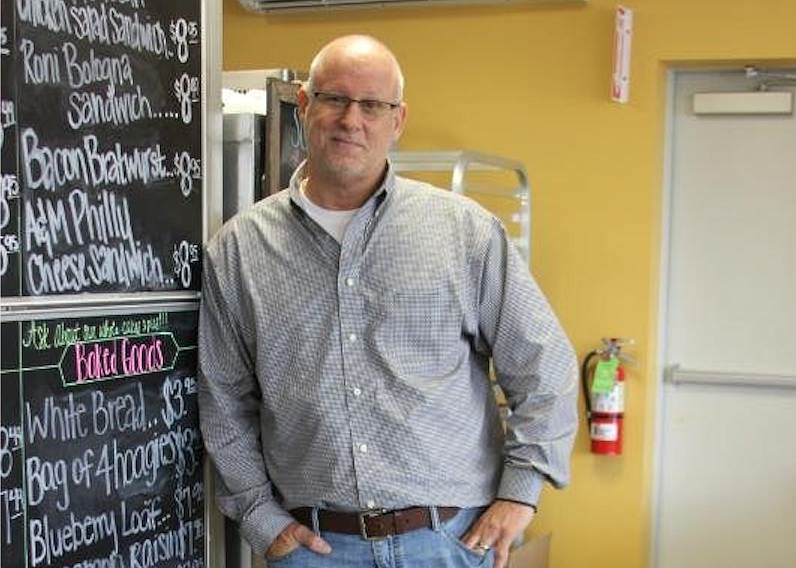 Michael Hartz, owner of The Hive Café on Dollarway Road in White Hall, changed his operating style to survive the pandemic shutdown.

When much of the state's economy shut down in mid-March, White Hall Mayor Noel Foster said, he was worried.

"Initially, I was afraid, just like every other mayor [and] county judge," he said. "Even the governor [Asa Hutchinson] was afraid and there was an economic lull."

However, he said, there have been lingering effects.

"A lot of our businesses have suffered while others [especially online and big box stores] benefited from the pandemic," he said.

Joe Spadoni, White Hall Chamber of Commerce president and Pine Bluff Cotton Belt Federal Credit Union board chairman, said he is not aware of any businesses closing in White Hall because of the virus.

Nonetheless, he said, "It has impacted many in some form or fashion."

For example, many banks continue to keep their lobbies closed, and it's hard to get a loan without in-person contact. As a result, lending is down in the area, he said.

Small restaurants are struggling because of seating restrictions and other pandemic regulations, and this is affecting profits, Spadoni said.

That's not necessarily the case with the fast-food restaurants.

"The national chains are doing great and hardly missed a beat," Foster said.

Soon after the shutdown, he said, it wasn't unusual to drive by McDonald's or the Dairy Queen and see vehicles lined up, waiting -- often extending beyond the parking lot and into the road -- to place an order.

It seemed the safest option early in the pandemic.

Foster based his comments on more than a visual drive-by; instead, he points to the city's rising sales-tax collection numbers, including its 1% sales tax and 3% advertising and promotion tax over the past six months.

Collections "slowed way down" in early spring but started to bounce back by the start of summer, he said.

The 3% tax collected on restaurant receipts dropped to about $40,000 or less for the months of March through May but rose to about $58,000 in June. Then July and August surged, totals reaching more than $63,000 each month.

Michael Hartz opened The Hive Cafe on Dollarway Road in 2016 and had steadily built his business until he employed about a dozen and was known through the community for his pecan chicken salad and bologna sandwiches.

The cafe sold cinnamon rolls by the panful until March.

"When the pandemic first hit, my first thought was to protect our employees so we closed down," Hartz said.

That lasted about three weeks, then the cafe started offering curbside service.

As the state guidelines were loosened, the eatery added carryout and dining-in options, as well as allowing customers to order by text and then online.

"We had to reinvent our services," Hartz said.

The operation took advantage of the Payroll Protection Program and survived the worst -- the May tax bill was less than a quarter of pre-pandemic days.

Now, Hartz said, things are getting back to normal.

"We are at almost full capacity [during peak dining hours]. We've never done better," he said.

However, Hartz said, "We wouldn't survive another shutdown."

"Our economy is coming back strong," Foster said, and he credits residents' "shop local-first" ethos, whether in White Hall or nearby Pine Bluff.

Like the mayor, Spadoni is optimistic about White Hall's immediate future.

Still, as the city moves into the fall and winter months, the mayor and City Council will keep a tight hold on its purse strings, despite having money in the bank.

"We're in good shape," Foster said about the city's savings.

White Hall has a little more than $2 million.

Given the circumstance surrounding the pandemic, Foster said, "We are pleased with our revenues."