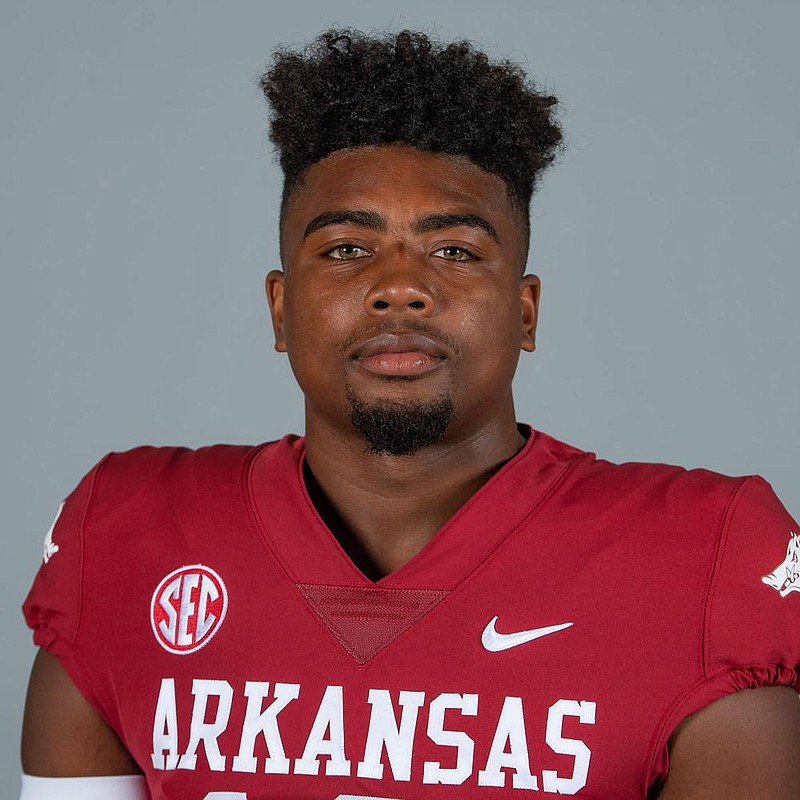 For practice No. 1, Burks had gone to the traditional style of catching close to the chest to make for easier tucks and quicker ball security.

"When I first got here, coach [Justin] Stepp had mentioned, 'He catches the ball above his head,' " Fountain said Tuesday night on a video chat. "So I brought him in -- this was before we ever had spring ball -- I said, 'Treylon, if an NFL team has two guys of equal value, both great returners -- and you're a great returner -- who are they gonna take? A guy that catches above his head or a guy that's gonna catch it properly with a body tuck?' "

Fountain said Burks took the suggestion to heart and began adapting right away.

"He's really worked on it," Fountain said. "He got in the first practice and really looked great. I'm really, really proud of him."

Burks, a 6-3, 232-pound sophomore from Warren, is on the watch list for the Hornung Award, which is given to the nation's most versatile performer.

He averaged 10.8 yards on 12 punt returns last season to rank fifth in the SEC. He also averaged 22.6 yards on 10 kickoff returns, including a long return of 42 yards. He didn't have enough returns to qualify for ranking in the stats, but would have been third in the conference if he did.

Earlier in camp, Burks said he's put in the work to change his catching style.

"It's a battle every day," he said in late August. "Sometimes I get in that old habit and catch the ball with just my hands, but we've been working, the team has been working with me to get better at catching the ball like I'm supposed to. I'm going to do it the right way this time."

The Razorbacks worked in full pads Tuesday, with the defense in red jerseys and the offense in white.

The temperature was in the low 80s once again, with humidity in the low 40s making for a pleasant feel for the 17th workout of 25 during preseason practice.

[Video not showing up above? Click here to view » https://www.youtube.com/watch?v=6zwe1yDLiDk]

Potential starters Bumper Pool and Grant Morgan appeared to take more reps with the lead group Tuesday after Andrew Parker, Deon Edwards and others got first-team work in recent days.

Defensive coordinator Barry Odom had a group of two -- Hayden Henry and Zach Zimos -- working on strong-side linebacker drills in a different area of the field away from the big pack of linebackers.

"Odom was just focused right on them. He was making them tackle, making them get up and run, making them go do it again. [Henry] was just saying it's awesome because of how much knowledge [Odom] has. He brings it, and he just focuses all on you, and you can kind of open his mind up and get him to laugh and joke about it."

Junior wideout Mike Woods has blossomed into even more of a leader on and off the field.

Woods could be heard down the field Tuesday shouting advice and encouragement to the wide receiving group. He got something big to celebrate when Treylon Burks turned in perhaps the day's best catch with a one-handed snag with his left hand while heading toward the right boundary.

The defensive backs unit did drills, dummy tackling and play recognition together as safeties and corners during the opening viewing periods with cornerbacks coach Sam Carter.

Defensive coordinator Barry Odom, who coaches safeties, had strong-side linebackers Hayden Henry and Zach Zimos as a small unit for the second straight day going through drill work prior to the team periods.

Over the past week, sophomore defensive tackle Isaiah Nichols has been taking more work with Jonathan Marshall and the starting defense in periods open to media viewing.

Nichols, Marshall and graduate transfer Xavier Kelly appear to be the top three defensive tackles, with redshirt freshmen Marcus Miller and Taurean Carter in the next wave of inside guys.

"That's how we practice and play defense, to be tough and physical," Nichols said. "I feel like that's the most important thing in the defensive line is being tough and playing hard-nosed football."

Tight ends coach Jon Cooper is bringing some offensive line mentality to the Hogs' tight end room. A three-year starting center (2006-08) at the University of Oklahoma, Cooper was named Big 12 offensive lineman of the year as a senior while snapping to Heisman Trophy winner Sam Bradford.

"He brings a lot of knowledge to us as far as 'O-lineman lingo,' which is what he calls it," senior tight end Blake Kern said. "He understands that kind of stuff, and he's brought that to us. Instead of being a one-dimensional tight end, he brings the dimensions of pass catching and his knowledge of the NFL.

Tailback Trelon Smith appears headed for a second-team spot behind his buddy Rakeem Boyd at tailback. The 5-9, 185-pound sophomore, who transferred in from Arizona State prior to last season, sounded grateful for everything he's got on a recent video chat.

[Video not showing up above? Click here to view » https://www.youtube.com/watch?v=erhj6PQBsEQ]

"Man, my 'why' is as simple as my family," he said. "I come from a harsh background, not having much growing up as a young kid. Every time I step out onto the field, I see it as an opportunity.

Grad transfer Xavier Kelly has an appreciation for the work of the Arkansas offensive linemen, particularly one of the guys he faces a lot, left tackle Myron Cunningham.

Cunningham, who is now 6-6, 325 pounds after adding 20-plus pounds in the offseason, said he's comfortable with his game.

[Video not showing up above? Click here to view » https://www.youtube.com/watch?v=erhj6PQBsEQ]

[Video not showing up above? Click here to view » https://www.youtube.com/watch?v=qZj3ALUdfvU]

"I definitely got stronger since then, a lot stronger, and especially it helps," he said. "I know [Sam] Pittman's referenced it before about sitting on the bull rush and pass pro. It definitely helps. It makes a big difference in run blocking."