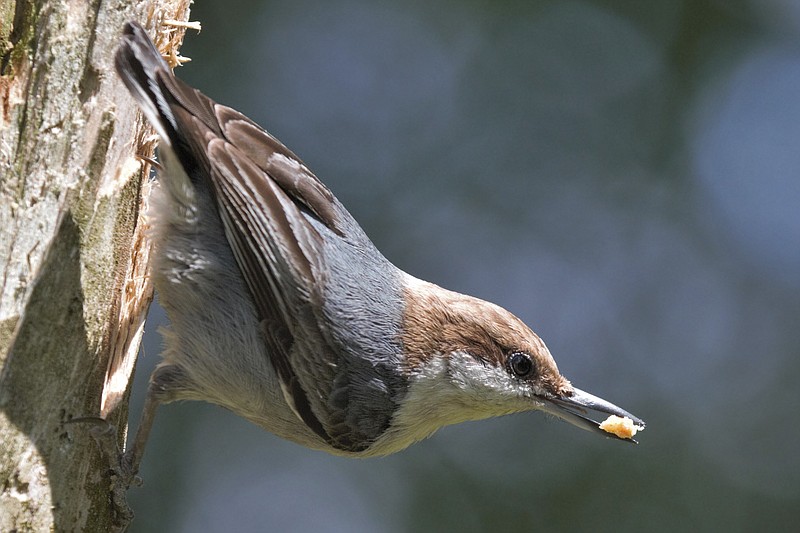 In this photo taken April 26, 2020, provided by Michael P. Kopack Jr., is a brown-headed nuthatch bird in Angier, North Carolina. As the new coronavirus drags on, interest in birdwatching has soared nationwide as bored Americans look up from their Zoom meetings or the unemployment website and notice a fascinating world just outside their window. (Michael P. Kopack via AP)

JEFFERSON CITY, Mo. — Missouri wildlife officials are hoping a tiny songbird that disappeared from the state a century ago will stay in a new habitat in the Mark Twain National Forest.

The Missouri Department of Conservation and other wildlife agencies released 50 brown-headed nuthatch birds in the forest in late August.

The bird disappeared from the state in the early 1900s after loggers removed acres of pine forest, which the quarter-ounce birds need for habitat, The Kansas City Star reported.

The wildlife agencies restored pine woodland in the forest to house the birds.

"Brown-headed Nuthatches are pine specialists and excavate their own cavities in pine tree snags, or dead trees, every year," State Ornithologist Sarah Kendrick said in a news release. "By creating new cavities each year, these birds provide cavities for other cavity-nesters, like chickadees and titmice."

Another 50 nuthatches will be released next August. The birds came from the Ouachita National Forest in Arkansas.

"This is a great example of ecosystem restoration -- when you bring back the habitat, you can bring back some of the species that have been lost along the way," Kendrick said.