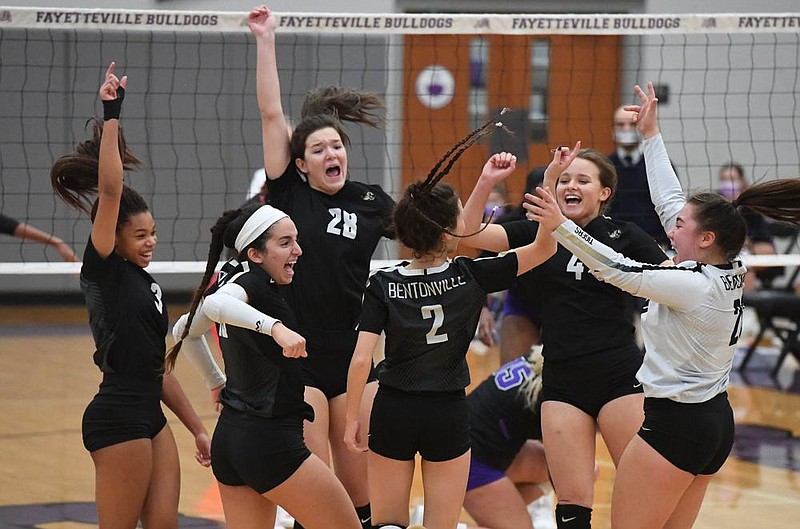 The Bentonville squad celebrates a point against Mount St. Mary Tuesday Oct. 27, 2020 during the first round of the Class 6A state volleyball tournament at Bulldog Arena in Fayetteville. Visit nwaonline.com/2001027Daily/ for a photo gallery. (NWA Democrat-Gazette/J.T.WAMPLER)

FAYETTEVILLE -- Jamie Myrick may be only 5-1, but the senior stood tall for Bentonville in its opening-round match in the Class 6A state volleyball tournament.

Myrick did all she could to make sure the ball didn't land on the Lady Tigers' side, throwing her body all over the floor to the tune of a match-high 31 digs. She also had a key service run near the end of the second set to shift momentum and help Bentonville to a 25-17, 27-25, 25-20 victory over Mount St. Mary on Tuesday morning.

The defending state champions and No. 4 seed from the West advance to take on Conway, the No. 1 seed from the Central, this morning at 9 in the first quarterfinal.

Mount St. Mary, the No. 5 seed from the Central, looked like it might grab some early momentum in the second set when the Belles took a 24-20 advantage.

[Video not showing up above? Click here to watch » https://www.youtube.com/watch?v=_xDwvj2GDaU]

Myrick, who moved from Texas to Bentonville before her junior year, said it's all about mindset.

"You've just got to go into it being confident in yourself," Myrick said. "Showing up and supporting your teammates, defense is fundamentals. There's no team without defense."

She's also a key communicator for her team. Myrick's voice could be heard constantly during the match, whether it was calling a ball or letting teammates know what was open on the other side of the court.

"She's definitely one of our go-to senior leaders, and she showed that today from the back row, from the service line," Smith said. "She took care of business and we're really proud of her.

"What was nice about the defense was it wasn't just primarily our defensive players. Even our front row was coming off and getting those attacks. So it was a balanced effort on the defensive front, which made a big difference for us to be able to run our offense."

The Lady Tigers finished with 84 digs as a team, a huge total for three sets. It also helped Bentonville win some long rallies in a competitive match.

Mount St.Mary Coach Jorge Martinez said serve receive is usually a strength for his team, it just wasn't as much on Tuesday.

"Serve receive was a struggle in that second set," Martinez said. "We're actually very good in that department. Today, it just wasn't there. A lack of communication in our blocking didn't help us either."

He also pointed out the Lady Tigers' history of success gives them an advantage.

"It's hard playing a team that has this history," Martinez said. "They have experience being here more than us."

West (4-13) trailed much of the fourth set and turned back one set point before getting the 27-25 victory to force a fifth.

But North Little Rock, the 6A-Central regular-season champion, jumped to a 5-1 lead and never looked back in the fifth set.

Rogers, the No. 5 seed from the West, won a seesaw opening set -- scoring the final two points -- and used that momentum to go on to the sweep. The Lady Mounties (12-6) advance to take on 6A-West conference and tournament champion Fayetteville today at 3 p.m.

Abby Harris added nine kills and two blocks for Rogers, which avenged a five-set loss to Northside in the first round a year ago. Camiran Brockhoff also contributed 19 assists, and Rylee Martin added 10 digs.

Kyla Clubb led the way with 10 kills, while Jordan Benford and Kat Cooper added nine each as Har-Ber (10-4) pulled away in each set. Caylan Koons dished out 39 assists, while Koons, Josie McCroskey and Libby Hall led the defense with seven digs each. Kinleigh Hall contributed four blocks. The Lady Wildcats, the No. 3 seed from the West, also served up 10 aces in the match.

Har-Ber will advance to take on Cabot, the No. 2 seed from the Central, today at 6 in the quarterfinals.