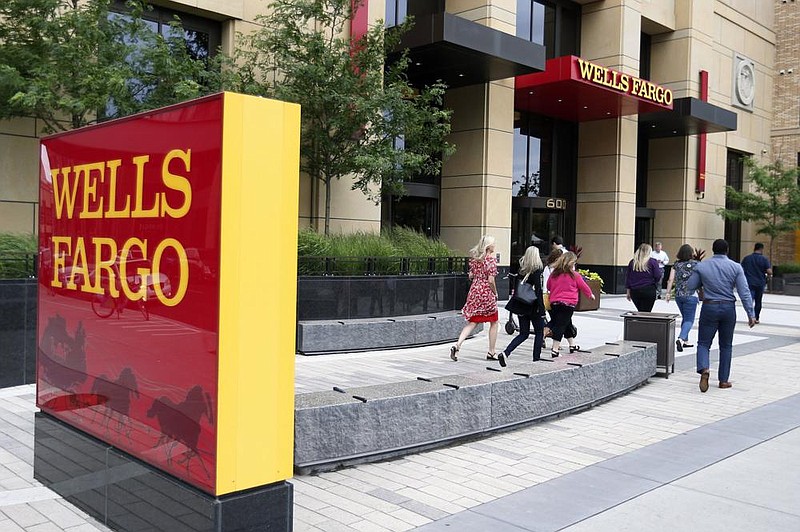 People pass a Wells Fargo building in downtown Minneapolis in this 2019 file photo. The bank said Thursday that it has fired as many as 125 workers for defrauding the Small Business Administration. (AP)

An investigation by the Charlotte, N.C., bank found that some workers had made false representations in applications for relief funds through the federal agency's Economic Injury Disaster Loan program, according to an internal memo. The program is a key part of the government's effort to prop up businesses during the pandemic.

"We have terminated the employment of those individuals and will cooperate fully with law enforcement," David Galloreese, Wells Fargo's head of human resources, said in the memo. "These wrongful actions were personal actions, and do not involve our customers."

"While these instances of wrongdoing are extremely unfortunate and disappointing, they are not representative of the high integrity of the vast majority of Wells Fargo employees," Galloreese said.

While it's possible for employees at large companies to legitimately tap U.S. aid for businesses they operate on the side, Wells Fargo's findings add to evidence the program was widely abused -- with little sign that such activity was limited to bankers.

Unlike other employers, banks can check whether employees had aid deposited in their accounts. An earlier review by JPMorgan Chase & Co. found that more than 500 employees tapped the disaster loan program, and that dozens did so improperly.

The Small Business Administration urged banks to look out for suspicious deposits from the program to their customers and even their own staff. While the program offers loans to businesses, much of the concern has focused on its advances of as much as $10,000 that don't have to be repaid. A Bloomberg Businessweek analysis of agency data in August identified at least $1.3 billion in suspicious payments.

The agency urgently expanded the disaster loan program earlier this year as shutdowns to fight the virus left small businesses desperate for cash lifelines. The agency's inspector general has since flagged evidence of fraud in the program, saying it identified more than $250 million in aid given to potentially ineligible recipients as well as $45.6 million in possibly duplicate payments.

Wells Fargo "will continue to look into these matters," Galloreese wrote. "If we identify additional wrongdoing by employees, we will take appropriate action."

Chief Executive Officer Charlie Scharf joined Wells Fargo last October with a mandate to clean up the firm and bolster controls after years of scandals. Earlier this year he told lawmakers he's brought a sense of urgency that is "very different" than the bank's past efforts to address lapses.

The bank's memo Wednesday said that it has "zero tolerance for fraudulent behavior." Between 100 and 125 people were terminated, the person with knowledge of the matter said, asking not to be identified discussing an internal review.

Unlike the government's Paycheck Protection Program, in which banks served as intermediaries, disaster loan funds came directly from the Small Business Administration. The agency has said it has "stringent fraud-protection safeguards" and that it had been under pressure to move the money quickly as the economic impact of the coronavirus pandemic bit into the U.S. economy.

Also on Wednesday, the bank reported third-quarter earnings. The $2 billion in profit it posted disappointed investors who continue to be bothered by the bank's expenses, and shares fell 6%.

Information for this article was contributed by Hannah Levitt of Bloomberg News and by Austin Weinstein of The Charlotte Observer.