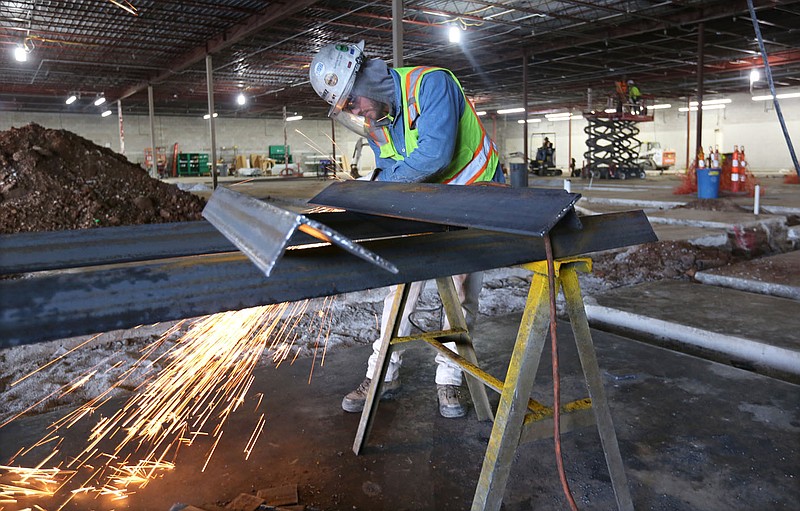 Tanner Myers with Nabholz Construction grinds the edge of angle iron for supports of roof top units Wednesday, Jan. 15, 2020, inside the new location of Ozark Natural Foods, 380 N. College Ave., in Fayetteville. The new store opened in June at the former site of an IGA and features an expanded farm and garden department, a taproom and coffee bar, an outdoor covered patio and to-go meals. - Photo by David Gottschalk

Northwest Arkansas, like the rest of the nation, is working to rebuild its economy after the coronavirus pandemic stifled its growth.

Economist Mervin Jebaraj said Thursday that the region's economy improved in almost every category from 2018 to 2019, but has regressed, like the rest of the country, in response to covid-19.

"Nearly every indicator was worse than [last year]," said Jebaraj, director of the Center for Business and Economic Research at the Sam M. Walton College of Business.

For the past 10 years, the center has worked with the Northwest Arkansas Council to report on the economic performance of the region, measuring employment, poverty and other indicators. They usually host a banquet somewhere in the Ozarks to discuss their annual findings but decided this year to meet via an online Zoom webinar.

During the presentation, Jebaraj went through the latest numbers and addressed the impact covid-19 has had on the state and region. He also kept a flyswatter nearby, a reference to Vice President Mike Pence's encounter with a fly during the vice presidential debate Wednesday night.

"Please let me know, and I'll take care of it real quick," Jebaraj said to those in the meeting.

Overall, Northwest Arkansas showed positive economic growth from 2018-19. According to Thursday's report, the region's population rose nearly 2%, or by 9,665, to 534,904 residents. This is a reduction of some 15,000 people from last year, when McDonald County, Mo., was considered part of the Northwest Arkansas region, Jebaraj said. Data for the report now comes from Benton, Madison and Washington counties.

Nonfarm employment rose by 5,200, totaling 263,500 workers, data show. Average annual wages increased more than 2% to $47,600, and there are 324 additional business establishments in the region compared with a year earlier. Median household income also increased more than 6% to $61,674.

The only negative indicator was the region's poverty rate, which rose a 10th of a percentage point to 12.6%, data from 2019 show.

In 2018, the organizers of the report began evaluating the region compared with Austin, Texas; Durham-Chapel Hill, N.C.; and other "high-performing" areas in efforts to be like them. Jebaraj said real gross domestic product growth, which is correlated with job creation, in the Fayetteville-Springdale-Rogers area has slowed in recent years compared with its peers.

The full "State of the Northwest Arkansas Region" report is available at cber.uark.edu.

The region, overall, has seen steady growth in years past, but 2020 -- specifically in late spring -- has seen slowed local and national economies.

According to U.S. Commerce Department data, the U.S. gross domestic product growth rate fell more than 34%, or by $2.15 trillion, in the second quarter to a level of $19.4 trillion. In the first quarter, the GDP decreased more than 3%, or $186.3 billion.

Jebaraj said he's expecting a growth rate in the third quarter to make up for losses in the second, but "it won't get us anywhere near where we were before."

During the pandemic, data show Arkansas near the top in consumer spending compared with other states. Jebaraj said that was driven by April stimulus checks and weekly unemployment payments in some cases exceeding $600. When additional federal unemployment benefits ended in August, he said consumers began to pull back and Arkansas spending "dropped to the middle."

Jebaraj said stimulus checks and the additional unemployment benefits "muted some of the effects" and "now we are starting to deal with those issues all over again."

In general, people with lower incomes spent more during the pandemic compared with those in middle to high income brackets, data show.

Apparel, grocery and health care spending increased between 2% and 10% last month compared with January. Meanwhile, spending at restaurants, entertainment and recreation, and transportation fell between 18% and 54%.

Jebaraj said because the bulk of the people in Northwest Arkansas have middle to high incomes, spending is down, and businesses are closing.

"Small businesses are faring worse than other parts of the state, which is not what we expected," he said.

Compared with January, data show the number of small businesses in Arkansas has declined more than 15%. In Benton and Washington counties, those numbers have fallen nearly 22% and 24%, respectively.

Jebaraj repeatedly said Congress should pass a stimulus package to get people through the current recession. He also encouraged those who haven't completed the 2020 census form to do so.

After shutting down stimulus talks earlier this week, President Donald Trump said during an interview on the Fox Business channel Thursday that stimulus negotiations are making headway again.

"I shut down talks two days ago because they weren't working out," Trump said Thursday. "Now they are starting to work out. We're starting to have some very productive talks." 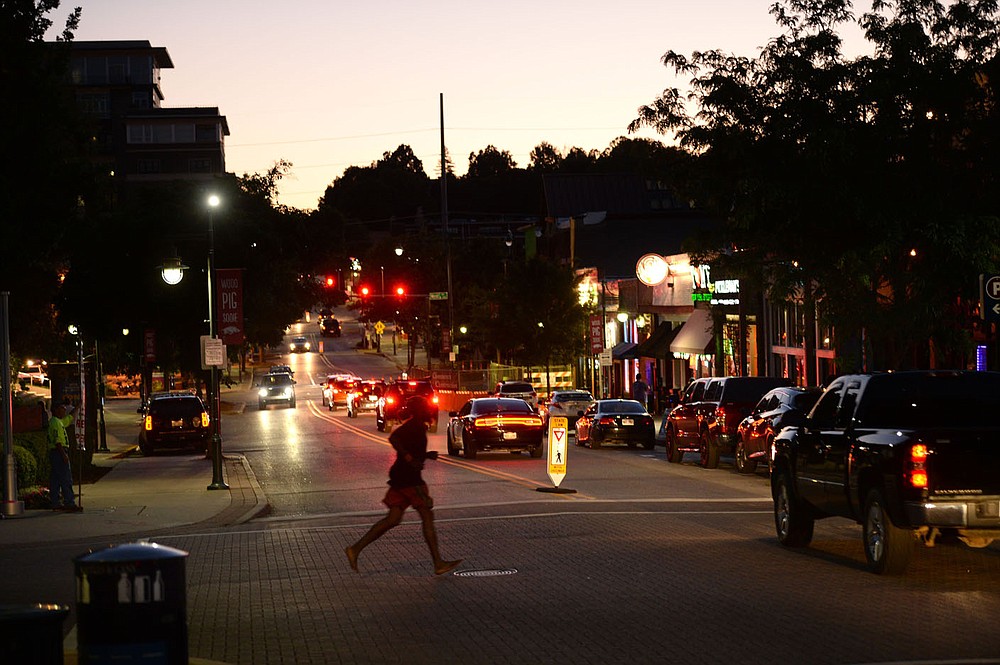 In this file photo a pedestrian crosses Dickson Street as traffic passes along the street in Fayetteville. (NWA Democrat-Gazette/Andy Shupe)