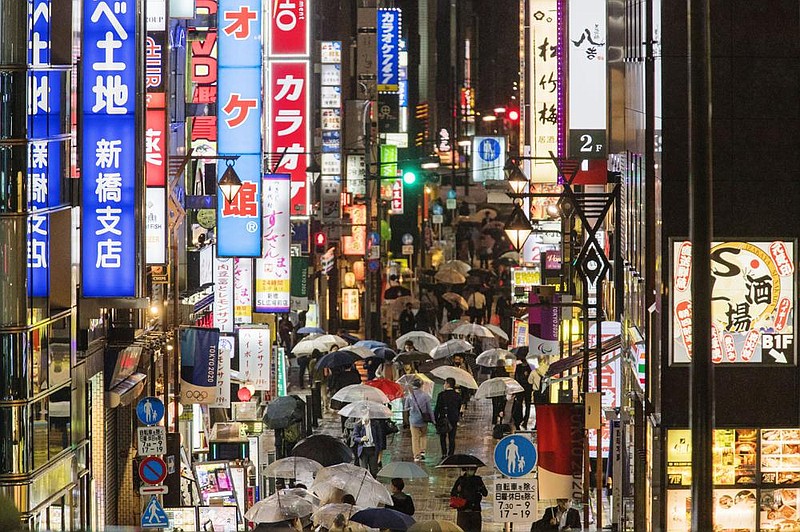 People walk Thursday through a street filled with bars, restaurants and other businesses in Tokyo. (AP/Hiro Komae)

Typhoon Chan-hom was 160 miles southeast of Japan's southern island of Tanegashima on Thursday evening with maximum winds of 78 mph, the meteorological agency said.

Chan-hom, which is the name of a kind of tree in Laotian, could produce heavy rain and wind in western Japan as early as today and in eastern Japan, including Tokyo, over the weekend, officials said.

The agency urged residents to prepare early for high waves and possible flooding from the storm.

KUALA LUMPUR, Malaysia -- A North Korean man failed Thursday in a court bid in Malaysia to challenge his potential extradition to the United States to face money-laundering charges, but he immediately appealed to the country's top court.

Mun, who is in his 50s, has lived in Malaysia for a decade and was arrested in May 2019 after U.S. authorities requested his extradition. Malaysia's government approved the extradition, but Mun has challenged the U.S. bid.

In his affidavit, Mun denied U.S. accusations that he was involved in supplying prohibited luxury goods from Singapore to North Korea in violation of U.N. sanctions while working in the city-state before moving to Malaysia in 2008.

Mun denied he laundered funds through front companies and issued fraudulent documents to support illicit shipments to his country. He said in his affidavit that he was the victim of a "politically motivated" extradition request aimed at pressuring his country over its missile program.

Gooi said the judge refused to consider Mun's affidavit as it was not a trial, a move which he said deprived his client of justice.

"We have filed an appeal to the Federal Court. This offense involves sanctions, and sanctions involve political character," he said.

Human-rights activist is freed by Iran

The semiofficial ISNA news agency quoted judiciary official Sadegh Niaraki as saying that Narges Mohammadi was freed late Wednesday after serving 8½ years in prison. She was sentenced to 10 years in 2016 while already incarcerated.

Niaraki said Mohammadi was released based on a law that allows a prison sentence to be commuted if the related court agrees.

Mohammadi was sentenced in Tehran's Revolutionary Court on charges including planning crimes to harm the security of Iran, spreading propaganda against the government and forming and managing an illegal group.

Mohammadi was close to Iranian Nobel Peace Prize laureate Shirin Ebadi, who founded the banned Defenders of Human Rights Center. Ebadi left Iran after the disputed reelection of then-President Mahmoud Ahmadinejad in 2009, which touched off unprecedented protests and harsh crackdowns by authorities.

In 2018, Mohammadi, an engineer and physicist, was awarded the 2018 Andrei Sakharov Prize, which recognizes outstanding leadership or achievements of scientists in upholding human rights.

HONG KONG -- A 700-year-old Chinese painted scroll from the Yuan Dynasty fetched $41.8 million at a Sotheby's auction in Hong Kong.

The painting depicts the princes riding horses, together with four attendants. One of the princes is Li Longji, who later became the longest-reigning Emperor Xuanzong of the Tang Dynasty.

The scroll has been documented in imperial collections and bears a collection of seals, including those of several emperors. In 1922, the "Five Drunken Princes" scroll was transported out of the Forbidden City by Pu Yi, the last emperor of China, after the fall of the Qing Dynasty.

The artwork was initially estimated to sell for between $10 million and $15.5 million. Many of Ren's 21 paintings are held in museums or owned by private collectors.

"This painting depicts the story of the five drunken princes after they had a very happy time, and then they got drunk and went back home," said Sally Fong, a specialist of classical Chinese paintings at Sotheby's. "Among the five princes, one of them is the future emperor. In this painting, we can see that he was depicted as the one who can tolerate the drunkenness, to go back home together with the other drunken princes."