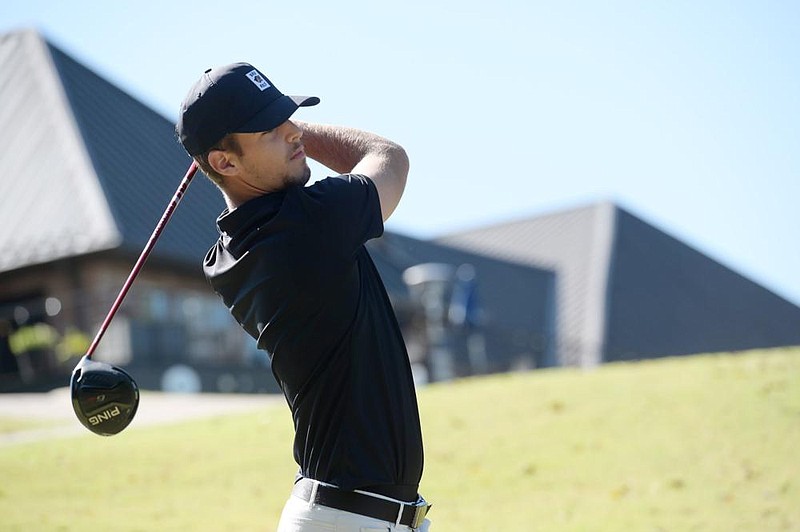 Phisher Phillips wasn't about to rest on his laurels, even a couple of hours after helping his Bentonville High golf team hoist the Class 6A state championship trophy last fall.

At a team dinner following their sudden-death win over Little Rock Catholic last October, Phisher and the underclassmen on the Tigers' golf team were already making plans for a repeat. Bentonville will get that chance starting Tuesday at Shadow Valley Golf Course as the host team for the 6A state tournament.

"Seriously, the first words out of their mouths were, 'Coach, we want to do this again,'" said Bentonville coach Kenty Early. "I said, 'that's what I'm talking about, boys.'"

After finishing fourth the previous year with a lot of sophomores, the Tigers used that returning experience to their advantage against a tough field. After finishing the final round tied with Catholic at 616, the Tigers got pars from Phillips and Michael Senn on the par-5, No. 9 to claim the title.

Both Phillips and Senn are back this season after earning all-state honors a year ago. Two other members of the championship team also return.

Early said playing the state tournament in his own backyard was a plus, but added nothing is guaranteed.

"It ain't home-field advantage if you don't win," Early said. "They have spent a lot of time practicing and these guys do know about the course, so we hope that gives them some comfort knowing, 'hey I really know how to play this hole.'"

Phillips did not take up golf seriously until he was in the eighth grade. He played a variety of sports at a younger age, but his love of golf eventually took over. He has a couple of Division I college offers including Central Arkansas that he is mulling.

Phillips has performed well on the junior golf circuit this summer, including a win in August at the Oklahoma Junior Golf Tour's Bailey Ranch Bash. He shot a 69-67 8-under to win the tournament.

"I played baseball up until the eighth grade before I decided to get serious about golf," Phillips said. "I just wanted to focus on golf because I fell in love with it."

Phillips said he first learned the game from his dad, Mark Phillips. He said the Tigers are ready to defend their title at Shadow Valley.

"All of our guys are very familiar with the course," Phillips said. "We feel like we've prepared for this, now it's time to go out there and live with the results at the end of the day."

Early said he doesn't have to do much motivational prodding with his team as the players take care of that on their own.

The tournament will be played over two days starting on Tuesday with the final round on Wednesday.

NOTABLE Helped the Tigers capture the school’s first boys state golf championship last fall by winning the 6A championship in a playoff with Little Rock Catholic. … Was named to the all-state team. … Finished fifth in the medalist standings. … Has had a successful spring and summer on the junior golf circuit, winning a championship in Oklahoma in August. … Mulling several college offers.