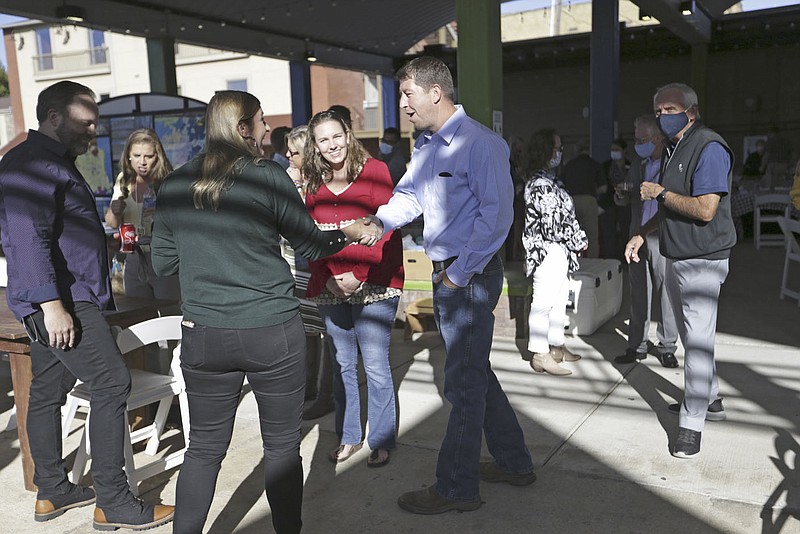 Chris (from left) and Amber greet Jill and Josh Bryant on Thursday during the annual Chicken', Peelin' & Politickin' at the Shiloh Square in Springdale. The Springdale Chamber of Commerce held its annual political get-together. Go to nwaonline.com/201002Daily/ for today's photo gallery. (NWA Democrat-Gazette/Charlie Kaijo)

"We talked a lot about how we could do this safely," said newly installed chamber president Bill Rogers. The event not only stayed in the open-air Walter Turnbow Park at Shiloh Square in downtown Springdale, but expanded beyond the plaza there and onto the grass.

Servers distributed the food, replacing the buffet of earlier years. Also, there were two locations to get the food instead of one. Drinks were handed out by a server instead of people helping themselves by taking bottles and cans out of the traditional ice-filled canoe. Tables were placed further apart and hand sanitizer was available.

The crowd of 450 wore masks with few exceptions, although the crowd was smaller by about 100 than it has been in previous years.

Gov. Asa Hutchinson gave one of the evening's few speeches, applauding Springdale's government and business leaders for taking needed actions to get the pandemic in the area under control. Lt. Gov. Tim Griffin and Attorney General Leslie Rutledge also made remarks. Much of the region's legislative delegation also attended.

Secretary of State John Thurston also came to the gathering, saying he appreciated the opportunity to attend an event, which have been few and far between because of the pandemic.

Among other, non-political attendees was Paul Jimkins of Fayetteville, who works for the S.F. Fiser & Co. accounting firm in Springdale. "We have a lot of clients who come to this event and it is a good networking opportunity," he said, referring to the gathering of both political and business leaders. The ongoing pandemic remains on people's minds, but he appreciated the precautions taken, he said.

Hutchinson took the opportunity during his remarks to thank the crowd and event organizers for their precautions, and to remind them to keep those precautions up after the event.

"I never dreamt I'd be governor and certainly never anticipated being a governor in a pandemic," Hutchinson said in his remarks. The three toughest decisions he had to make after declaring a public health emergency in March, Hutchinson said, were on business leaving many business open early in the pandemic, leaving mask-wearing as voluntary before declaring a mask mandate in July and, most recently, whether to open schools.

In each case, circumstances show he made right call, Hutchinson said.

Michael John Gray, chairman of the state's Democratic Party, disagreed when asked by telephone what he thought of the governor's remarks. Hutchinson is a Republican. "It's too early to be taking a victory lap, and instead he should be warning people that we're not out of this yet," Gray said. 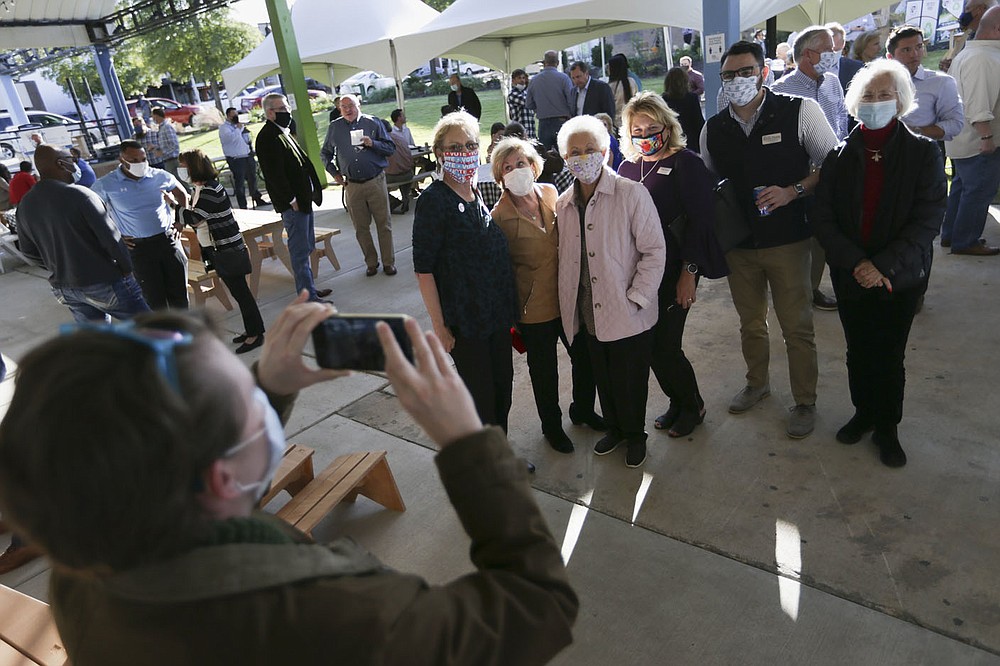 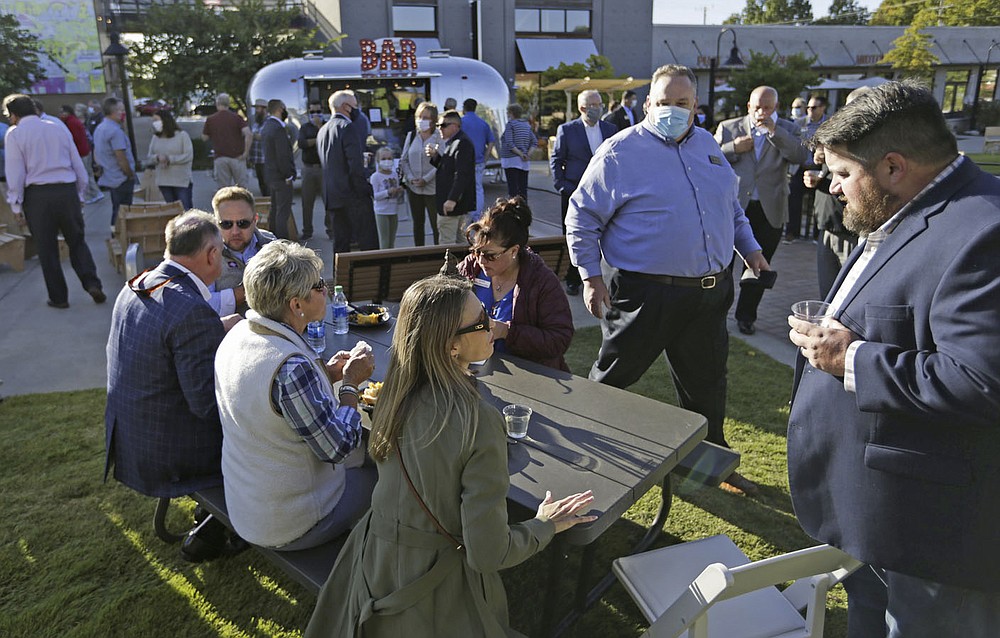 Attendees chat over a meal and drinks Thursday during the annual Chicken', Peelin' & Politickin' at the Shiloh Square in Springdale. Go to nwaonline.com/201002Daily/ for today's photo gallery. (NWA Democrat-Gazette/Charlie Kaijo)