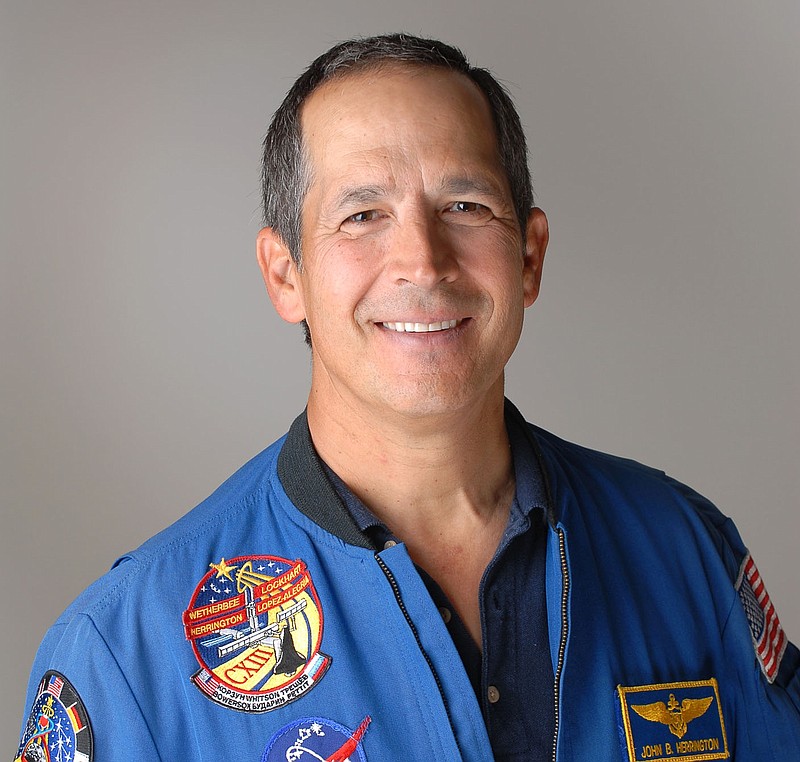 “After I flew in space, I performed nearly 60 appearances in the course of the following year, mainly to Native American communities or organizations,” says U.S. Navy Commander (Ret.) John B. Herrington, a member of the Chickasaw Nation, who was the first member of a federally recognized tribe to travel to space. “If our work as astronauts, who are people of color or female, can give a young child with a different color of skin the motivation that they too can be successful and achieve great things, then that’s a good thing, making a difference in the life of a child.” (Courtesy Photo/MONAH)

Indigenous history in the Americas, says Charlotte Buchanan Yale, didn’t start one day 16,000 years ago and end the day European settlers arrived in the New World. Instead, she believes, that history is ongoing and includes what Native American cultural leaders, scientists, musicians, activists, authors, actors and artists did to change the world 100 years ago, 20 years ago, last year and last week. So if, as the 2018 Reclaiming Native Truth project report found, “invisibility is one of the biggest barriers Native peoples face,” then “history must be directly linked to contemporary life [to show] that Native Americans’ cultures and contributions are vital parts of modern life,” the director of the Museum of Native American History in Bentonville adds.

That explains why this year’s fourth annual Native American Cultural Celebration, titled “Four Directions. One Earth. Mission United,” features U.S. Navy Commander (Ret.) John B. Herrington, a member of the Chickasaw Nation, who was the first member of a federally recognized tribe to travel to space.

“If you want to dissolve invisibility, I’d say spotlighting the dreaming of a young boy to one day reach for the stars and become the first Native American astronaut and a hero for young people everywhere is a grand start,” Yale says.

And even though the event, which starts today, has gone online, Yale says, “I wanted to connect the past for our visitors with present day indigenous cultural leaders through our virtual platform in a joyful celebration of the human spirit that is educational for all generations and inspires you to want to learn more.

“It used to be that I never knew who would walk through MONAH’s great doors and would want to collaborate with us,” she adds. “Now, the sky’s the limit making connections and putting people together.”

Herrington, who was born in Wetumka, Okla., remembers defining his fascination with the sky when he was an 8-year-old living in Colorado.

“My father was a pilot and flight instructor, so I was exposed to aviation at a very early age,” Herrington says, adding, “Lucky me!” But he says that as a child, his dream of being an astronaut was just that — a dream.

“I never really thought it was something I could accomplish until much later in life, when I was a test pilot in the U.S. Navy. I was fortunate that people encouraged me to pursue a career path that led me to achieving my childhood dream.”

Herrington took a somewhat circuitous path to his success. What he calls “lack of motivation” as a freshman in college led to him being suspended from school with a 1.72 GPA.

“The year I took off from college, I put my skills as a rock climber to good use in the mountains of Colorado,” he remembers. “I worked on a survey crew, and I had the opportunity to see mathematics in practice. I understood the practicality of something I had only seen in a textbook before. My work as a surveyor, in the mountains rock climbing, gave me the motivation to pursue an education in engineering and mathematics. Oftentimes the real world gives you an insight into practical nature of theoretical subject matter as stuff starts to make sense.”

Following the advice of the lead project engineer, his biography explains, Herrington returned to college and graduated with an engineering degree. He was also fortunate to meet a retired Navy captain who encouraged him to apply to the Navy, which led to a 22-year career as a naval aviator, test pilot and, finally, astronaut.

“I was selected in 1996, and I trained for approximately a year and a half to be qualified to fly,” he says of his journey to space. “I worked a variety of jobs in support of my colleagues that were assigned to missions. One of the best jobs I have ever had was working as an Astronaut Support Personnel (ASP). My job was to support all of the launches and landings of the space shuttle, and I spent a great deal of my time in Florida at the Kennedy Space Center. I was privileged to strap a few of my colleagues into the space shuttle and watch them climb into orbit shortly thereafter. Incredible job satisfaction.

“In 2000, I was assigned as a mission specialist on STS-113, an International Space Station assembly mission. I was fortunate to be both the flight engineer on the mission as well as perform three spacewalks. To be assigned to do everything I could have ever done on a shuttle mission was a fabulous feeling.”

Asked to explain what being in space was like, Herrington says: “It’s every child’s dream to float through the air, unencumbered by gravity. To be your own airplane or spaceship. That is the exact feeling you get when you float through the vehicle or go outside to do a spacewalk. On top of that, the view of the earth is mesmerizing.”

Beyond that, he says, “being in space has given me a greater appreciation for my place on the earth. We are fortunate to inhabit this jewel in the cosmos, and it is our responsibility to take care of it. This is all we have. Someday we may venture back to the moon or on to Mars, but for the vast majority of people, this is the only place we have, and we need to make it as livable as possible — for us and the generations that will follow. If we are not here, we are not going out there.”

Herrington admits there were moments in his career when his Native American heritage was pointed out in inappropriate ways. Once, he says, one of his Navy colleagues told him he “wished he was an Indian” so he could be selected to be an astronaut, too.

“That stung,” Herrington remembers. “Someone who I considered a friend and colleague thought that was the only reason I was selected. They discounted any work that I had done in my career and the success I had as a junior officer in the Navy. I believe I can speak for a few of my colleagues in the astronaut corps who are people of color or female. I’m sure they have heard similar comments along the way. If being a person of color or female is the ONLY reason we were selected, that serves no purpose in the mission of NASA. As successful, highly educated professionals, the color of our skin or our gender should have no bearing on whether or not we are qualified to perform the job. For others to think that is the case diminishes the hard work and capabilities of us all and it makes us work even harder to ensure we prove them wrong.”

Herrington’s goal when he speaks is simple. He wants his audience to know he is “no different than any of them.”

“I was fortunate people came along in my life and encouraged me to pursue difficult challenges. We all have the opportunity to make a difference in the lives of others, and it is our responsibility to be a role model for future generations. Someone whose life you touch may be the one who will fundamentally change the quality of life on earth for the better.”

Where: Online at the Museum of Native American History in Bentonville

the Quapaw Tribe, J.R. Mathews and a blessing from traditional healer

students, with a $100 first prize. Find out more at monah.us.

Gayle Ross (Cherokee) 2 p.m. — Out of This World Ice Explorations: With the Scott Family

(Dine’), assistant professor of history and affiliated faculty of Cherokee

and Indigenous Studies at Northeastern State University in Tahlequah,