Fall could bring chill to dining out 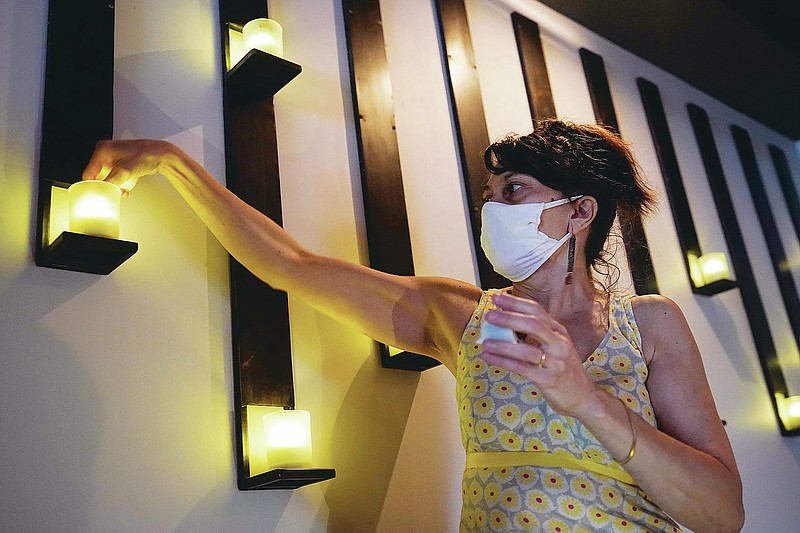 Mama Fox owner Samantha DiStefano installs electric tea lights in preparation for indoor dining at her bar and restaurant, Tuesday, Sept. 29, 2020, in the Bedford-Stuyvesant neighborhood of Brooklyn, in New York. Some lights were dead because they haven't been used in six months when Mama Fox closed during the viral pandemic. New York restaurants may reopen for indoor dining on Wednesday, but with capacity restricted to 25%. "It's baby steps. The 25% gives you the opportunity to dip your toe in," DiStefano said. (AP Photo/Kathy Willens)

NEW YORK -- U.S. restaurants are moving warily into fall, hoping their slow recovery persists despite the new challenge of chilly weather and a pandemic that's expected to claim even more lives.

New York opens indoor dining on Wednesday, restricting capacity to 25%. San Francisco may do the same as early as this week. Chicago is raising its indoor capacity from 25% to 40% on Thursday, but says restaurants still can't seat more than 50 people in one room.

It's a dose of reality for an industry that was able to stem at least some of its losses by pivoting to outdoor dining this summer, setting up tables and chairs on sidewalks and parking lots and offering some semblance of normalcy.

But as temperatures start to slide in many parts of the country, restaurants will have to coax patrons to come back inside, and it's anyone's guess how many actually will. That could spell trouble for an industry that has already lost nearly 100,000 U.S. restaurants -- or 1 in 6 -- since the start of the pandemic, according to the National Restaurant Association. The future remains uncertain for thousands more.

"We're all a little apprehensive, but that was the case when we started outdoor dining, too," said Samantha DiStefano, owner of Mama Fox, a restaurant and bar in Brooklyn.

Mama Fox can only seat 18 people inside at 25% capacity, so DiStefano will still rely heavily on her 14 outdoor tables. She thinks many New York restaurants won't open indoor dining until the limit reaches 50% because they can't cover their costs at 25%.

In the meantime, Mama Fox and others are trying to figure out how to extend the outdoor dining season using space heaters, tents, temporary igloos and even blankets. Heat lamps are already in short supply.

Restaurants are also promoting delivery and carryout. Nearly 70% of 3,500 restaurants surveyed in September by the National Restaurant Association said they added curbside takeout during the pandemic; 54% added delivery.

Philip Moseley, co-owner of Blue Oak BBQ in New Orleans, said carryout demand has risen from 10% of sales before the pandemic to 50% now.

Blue Oak BBQ's dining room is open at half capacity, or about 20 people. But a tent in the parking lot seats 80. That's enough traffic that the restaurant was able to hire back all 50 employees.

"You do anything you have to do to make the food work, to make the experience work, to get butts in seats," Moseley said.

Although fall in New Orleans is ideal for outdoor dining, tourists are scarce and the usual round of festivals won't happen this year.

"Every day has a new set of struggles," co-owner Ronnie Evans said.

Seventy percent of U.S. restaurants are independent, but chains are hurting too. NPC International, the largest franchisee of both Pizza Hut and Wendy's, filed for bankruptcy protection in July.

Steve Nikolakakos closed one of his three Manhattan restaurants because his landlord wouldn't give him a break on the rent. Another, Gracie's Diner, closed for two months in March after two employees died of the coronavirus.

Even with outdoor seating, the diner is only making 65% of what it did before the pandemic, he said. Still, that's better than May, when he was doing only 30% of his usual business.

"This is the worst thing I have ever seen," said Nikolakakos, a 40-year veteran of the industry.

Il Carino, a tiny Italian restaurant in Manhattan, is reopening its dining room with just 12 seats. Outdoor seating has recaptured only about 30% of the restaurant's business, and it has had to lay off 13 workers, said Giolio Alvarez, the restaurant's manager.

Alvarez said customers are asking for heat lamps, but the restaurant doesn't know if they're worth the extra money. And increasing menu prices is off the table.

"How are we going to increase prices?" he said. "Everyone is broke."

Some waiters and kitchen staff have gone back to work. Restaurant employment rose by 3.6 million people over the four months ending in August, according to government data. Still, there were 2.5 million fewer U.S. restaurant workers in August compared to February. September's unemployment numbers are due out Friday.

Mario Sandoval, an unemployed server from Las Vegas, appeared before a U.S. House committee last week to urge lawmakers to restart monthly stimulus checks. He also wants a guarantee that he can return to his job when his restaurant reopens.

"I'm worried about the economy crashing again," he said.

On Wednesday, some restaurant workers in Washington planned to strike, saying they can't survive on subminimum wages and tips that are a fraction of what they used to be because of capacity limits. The workers, backed by the group One Fair Wage, want lawmakers to guarantee minimum wages for restaurant workers.

But even if restaurants rehire staff, reopen dining rooms or shell out $1,000 for a fiberglass igloo, there's no guarantee customers will return.

Nancy Chapman used to eat out often, at restaurants near her College Grove, Tennessee, home and on the road when she traveled to horse shows. But Chapman, 70, who recently retired from her CPA and business management practice, said she isn't going to restaurants until she is satisfied there is a better understanding of covid-19 and a clear path to its resolution.

Juliana Gonzalez, 31, of Howard Beach, N.Y., is also trying to stay safe. She limits her contacts to her parents and her boyfriend, and she has walked out of dining rooms in New Jersey when she felt they were too crowded. But she's also ready for some normalcy, and she's eager for dining rooms to reopen in New York.

"I feel that most restaurants are trying to stay open, so most of them are trying their best to be safe," Gonzalez said. 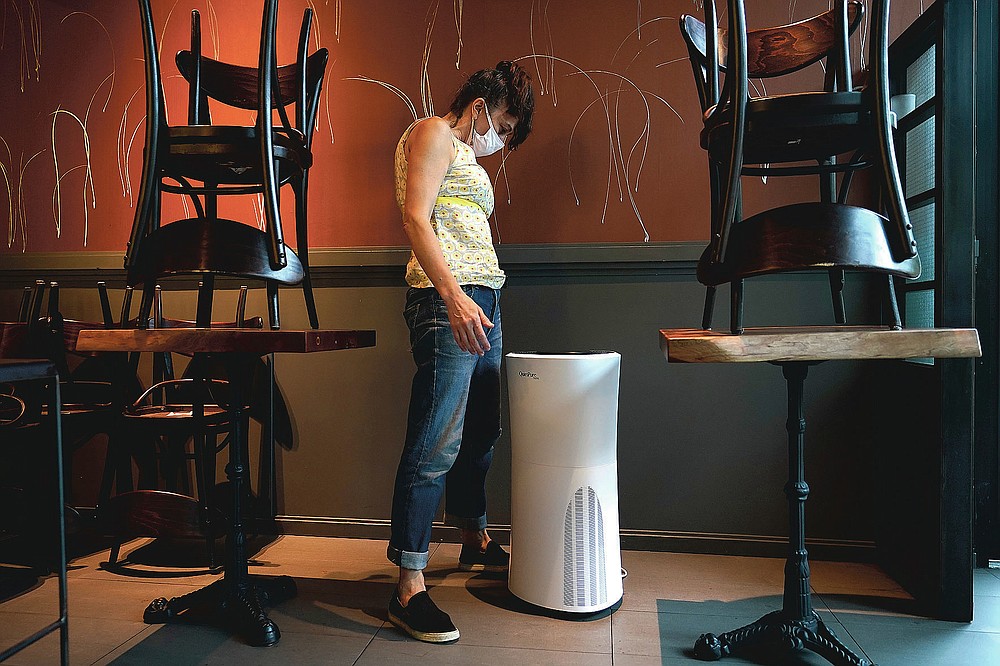 Mama Fox owner Samantha DiStefano looks at an air purifier she'll need when she opens the indoor portion of her restaurant and bar to patrons, Tuesday, Sept. 29, 2020, in New York, as she continues preparation for indoor dining. DiStefano doesn't plan on opening Wednesday, when indoor dining will be permitted in New York for the first time since March, but said she may try serving patrons at tables near the restaurant's floor-to-ceiling windows where diners can have fresh air while eating. (AP Photo/Kathy Willens) 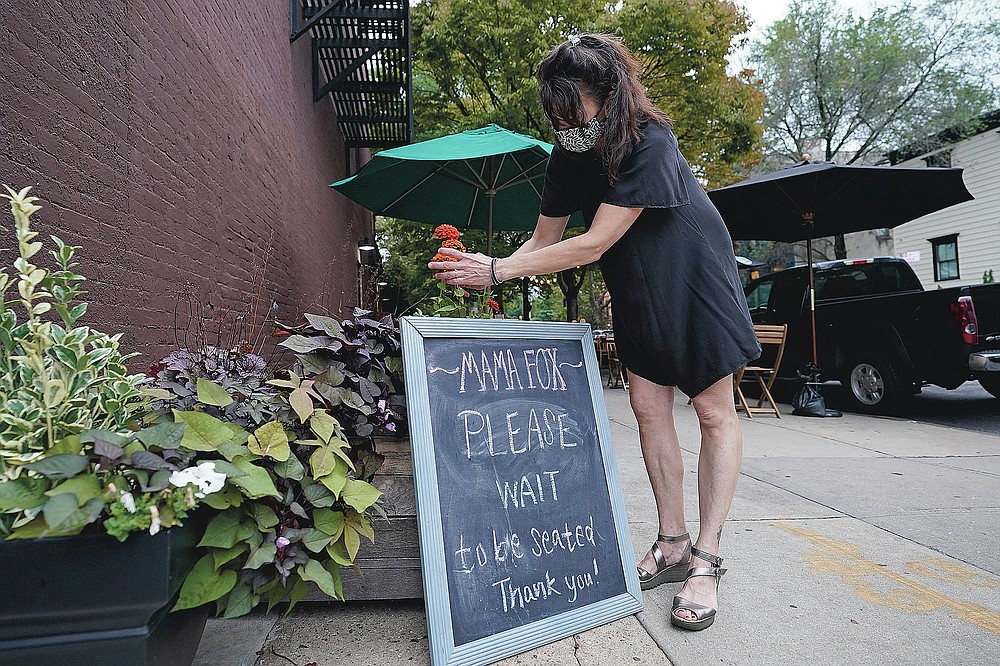 Samantha DiStefano adjusts flowers near the main entrance to Mama Fox, her Brooklyn bar and restaurant, Tuesday, Sept. 29, 2020, in New York, while preparing for indoor dining, which is permitted starting Wednesday in New York City. "We're all a little apprehensive, but that was the case when we started outdoor dining, too," said DiStefano. (AP Photo/Kathy Willens) 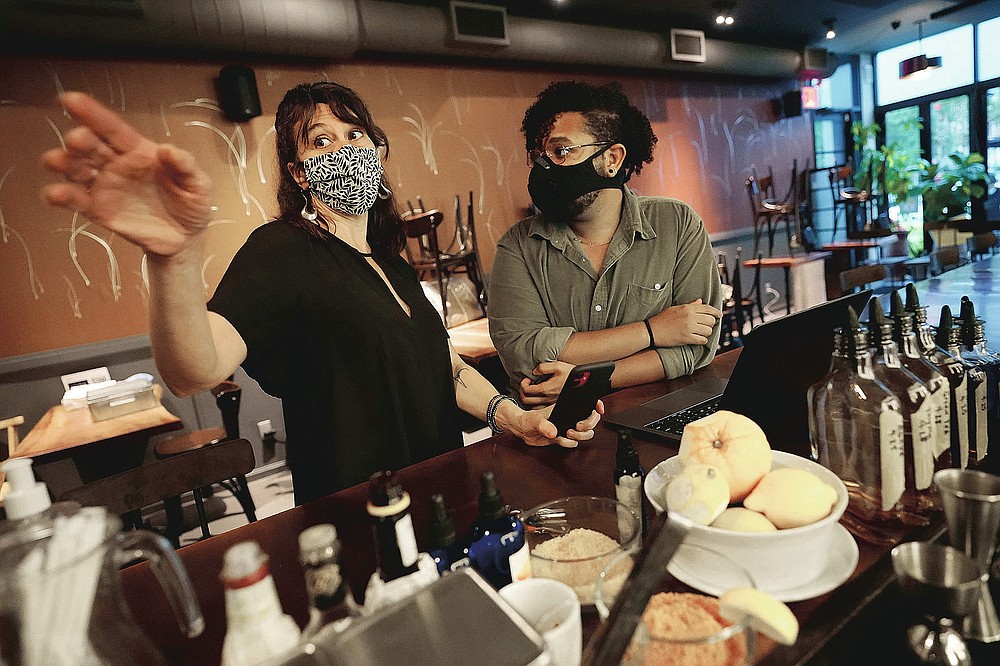 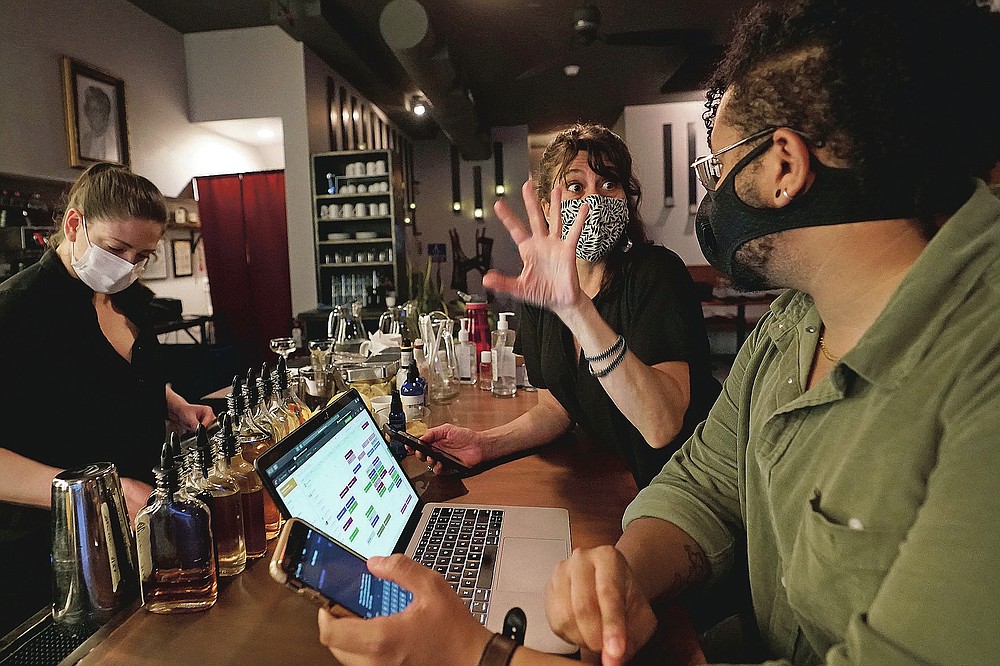 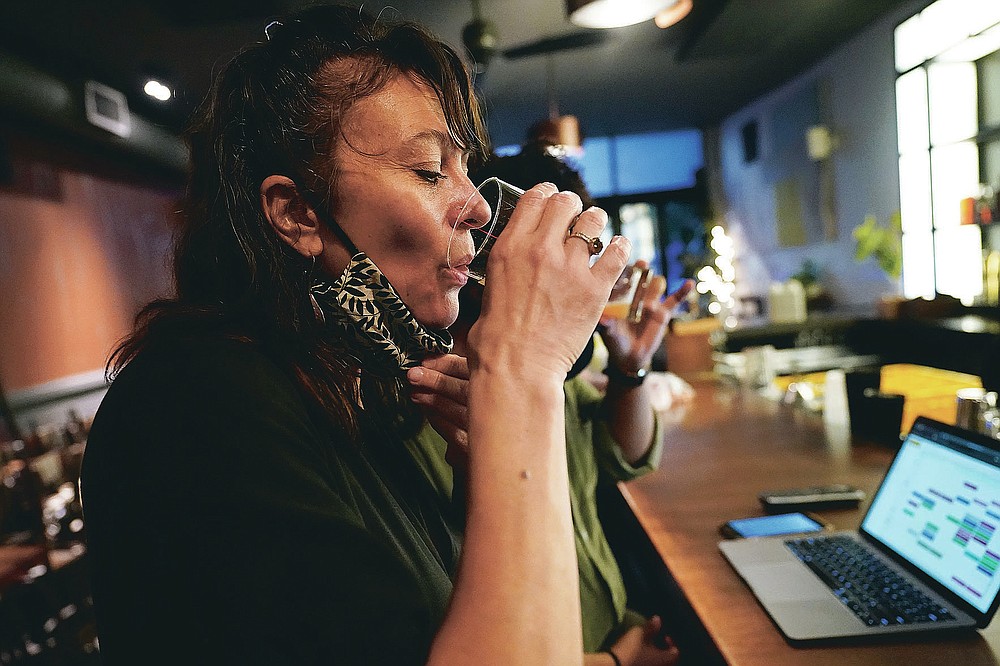 Mama Fox bar and restaurant owner Samantha DiStefano samples a new drink for the fall season, Tuesday, Sept. 29, 2020, in New York, while meeting with her manager to discuss serving patrons indoors. New York opens to indoor dining Wednesday, but capacity is limited to 25%. U.S. restaurants are moving warily into fall, hoping their slow recovery persists despite the new challenge of chilly weather and a pandemic that keeps adding to its casualties. (AP Photo/Kathy Willens) 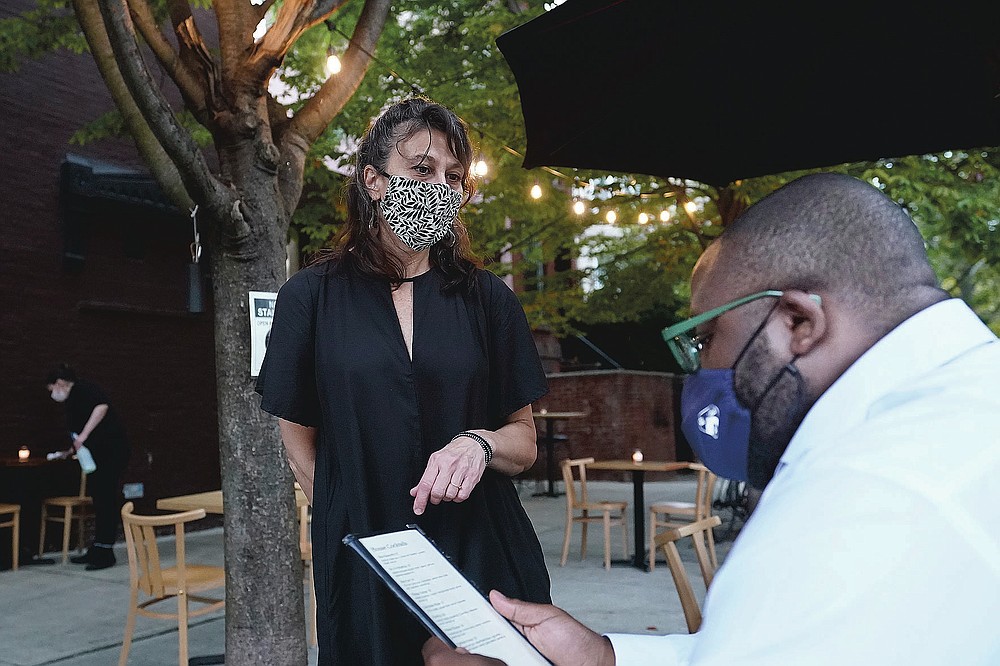 Mama Fox bar and restaurant owner Samantha DiStefano, left, shows a menu to customer Rashad Moore, Tuesday, Sept. 29, 2020, in New York, as Moore prepared to dine at an outdoor table on the sidewalk beside the Brooklyn eatery. New York restaurants can open to indoor dining Wednesday, but DiStefano thinks she will take it slowly at first. U.S. restaurants are moving warily into fall, hoping their slow recovery persists despite the new challenge of chilly weather and a pandemic that keeps adding to its casualties. (AP Photo/Kathy Willens) 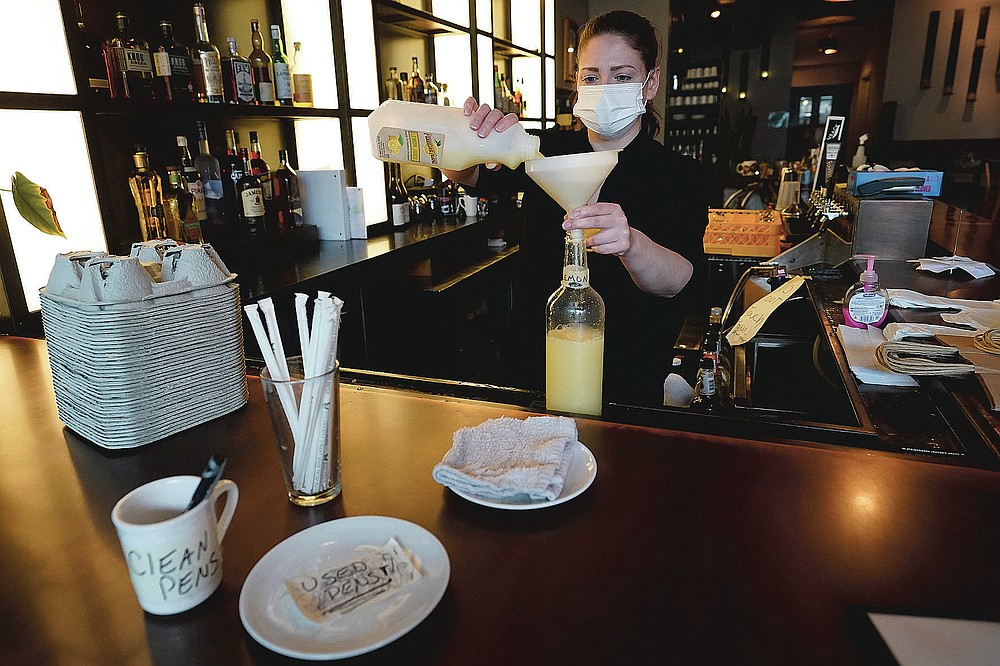 Bartender Devon Schickling prepares lemon juice for drinks, Tuesday, Sept. 29, 2020, at Mama Fox bar and restaurant in the Brooklyn borough of New York. Restaurants in New York can open to indoor dining at 25% of capacity on Wednesday, but they must follow strict protocols. (AP Photo/Kathy Willens)

Anne D’Innocenzio and Jim Mustian in New York and Paul Wiseman in Washington contributed to this report.