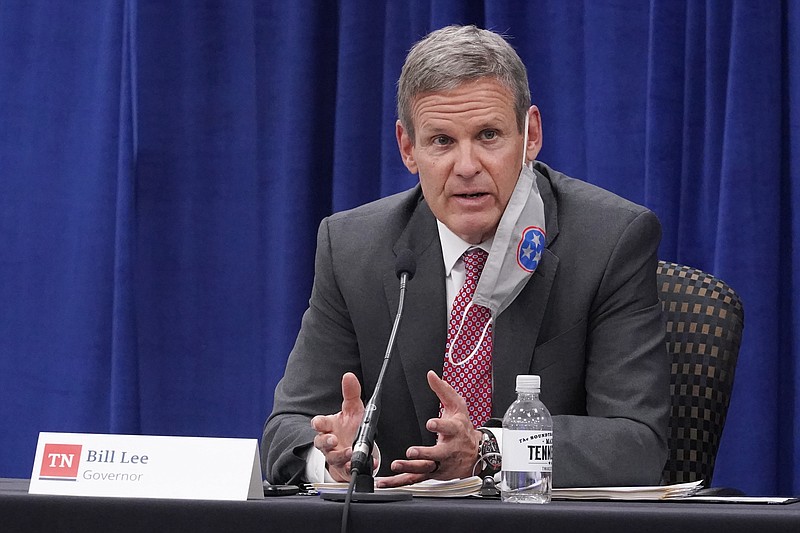 FILE - Gov. Bill Lee speaks during the Tennessee Higher Education Commission session of the state budget hearings Tuesday, Nov. 10, 2020, in Nashville, Tenn. A prominent voucher group’s outreach efforts to families of students “caused nothing but confusion” while Tennessee attempted to enact a program that would have allowed parents to use tax dollars to pay for private school tuition. According to emails detailing the implementation efforts, officials were clashing with the American Federation for Children as it rushed to get the voucher program up and running. (AP Photo/Mark Humphrey)

NASHVILLE, Tenn. -- A prominent voucher group's outreach efforts to families of students "caused nothing but confusion" while Tennessee attempted to enact a program that would have allowed parents to use tax dollars to pay for private school tuition, a state official said in emails detailing the implementation efforts.

Known as education savings accounts, the school voucher program was one of Republican Gov. Bill Lee's most contentious legislative priorities that he pushed through his first year in office. The program has never fully launched because of ongoing lawsuits.

However, emails obtained through a public records request by The Associated Press show state officials were clashing with the American Federation for Children -- a group previously chaired by Education Secretary Betsy DeVos -- as they rushed to get the voucher program up and running in the final days before a Tennessee judge blocked it from taking effect.

Under the program, eligible Tennessee families in only Nashville and Shelby County -- which includes Memphis -- could use up to $7,300 in public tax dollars on private school tuition and other preapproved expenses. Democratic lawmakers in those regions opposed the measure, but Republicans, almost all from areas outside where the program would be in effect, passed the measure anyway.

As the lawsuits were making their way through the courts, the federation's Tennessee chapter had set up its own website to help interested families submit a school voucher application, but state officials raised flags the group's actions were causing stumbling blocks for families.

"Your strategy or lack of has caused nothing but confusion," wrote Amity Schuyler, the former education deputy commissioner who had been overseeing the voucher program, to Tennessee Director Shaka Mitchell. Schuyler has since left the department to work for a school district involved in the voucher lawsuit.

"You've positioned AFC [American Federation for Children] to funnel low income parents to your website where you have deliberately withheld important program information, withheld important technical assistance resource and translated materials, in order to broker an exchange of information to access a state application that is open domain," Schuyler added in her May 1 email -- less than a week before a state judge deemed the program illegal and prohibited it from being implemented.

Mitchell countered that his team helped recruit 900 families to successfully apply for the program, adding that he stood by "the work our organization did to inform parents and schools about the new ESA [Education Savings Account] program."

"The simple fact is that the 2,700+ applications for the ESA program would not have happened were it not for the partnership between AFC and the Department of Education," Mitchell said in a statement.

The AP initially submitted its records request to the Department of Education in early May. Yet the agency didn't hand over all of the documents until November. When asked why it took nearly six months to provide just under 200 pages of documents, the agency cited difficulty getting the records from employees who had resigned.

The federation was a vocal proponent of Lee's school voucher program when his administration in 2019 attempted to persuade hesitant Republicans to sign onto the legislation. The group had spent thousands of dollars the year before on a handful of other Tennessee legislative candidates they hoped would vote in favor of school choice legislation.

Despite the federation's embrace of the program, state officials were raising concerns about the group's outreach efforts.

In late April, Schuyler alerted Mitchell that his group's website promoting the school voucher program was "scant on information for parents ... lacks additional details that might help them complete the application."