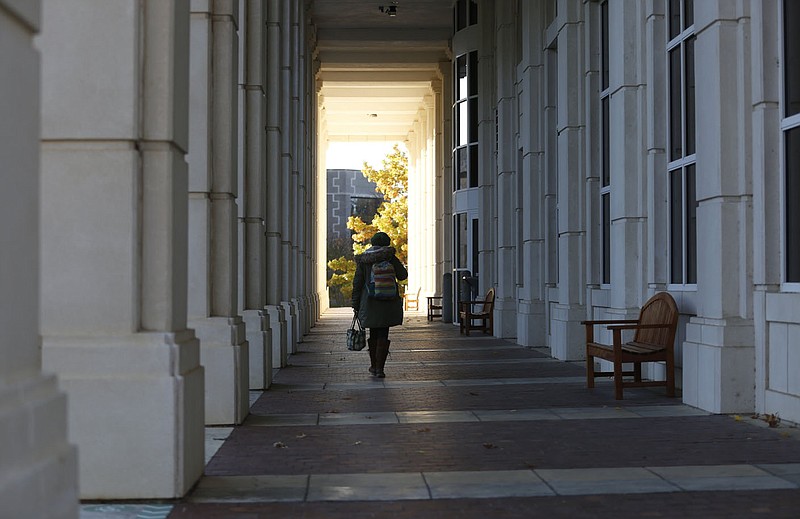 A pedestrian walks Friday, October 30, 2020, in the direction of the sunlight at the end of the tunnel formed by the columns on the east side of David W. Mullins Library on the campus of the University of Arkansas in Fayetteville. Built in 1968, Mullins Library replaced Vol Walker Hall as the main University Library. Check out nwaonline.com/201031Daily/ and nwadg.com/photos for a photo gallery.(NWA Democrat-Gazette/David Gottschalk)

A federal appeals court on Tuesday upheld the dismissal of a lawsuit challenging the University of Arkansas System's tenure policy for faculty members, but a separate case remains pending in Pulaski County Circuit Court.

The 8th Circuit Court of Appeals found "no basis for reversal" of a March order by U.S. District Judge James M. Moody Jr. dismissing the case.

"While we are pleased that our position on this matter was favorable at the federal level and are happy with the outcome, the University can't comment any further because the case is still pending," UA System spokesman Nate Hinkel said in a statement.

Tenure is defined by the UA System as the right of continuous appointment. Professors gain tenure based on their job performances over several years but still undergo annual reviews.

Gregory Borse, an associate professor of English and philosophy at the University of Arkansas at Monticello, said in a phone interview the policy was revised with the idea of scaring faculty members so that they do not speak on certain topics out of fear of losing their jobs.

In 2018, UA System official Michael Moore told trustees that "despite some public comments to the contrary, nothing in the proposed changes undermine academic freedom or the value that the University of Arkansas System places on tenure." The policy states that the "threat of dismissal will not be used to restrain faculty members in their exercise of academic freedom or constitutional rights."

The 10-person trustees board in 2018 approved changes to the policy that included listing 12 examples of grounds for dismissal.

Before it was revised, the policy gave four examples of grounds for dismissal: "incompetence, neglect of duty, intellectual dishonesty, and moral turpitude."

Their federal case sought class-action status and named the University of Arkansas Board of Trustees as defendants, as does the pending case in Pulaski County.

Moody, the federal district judge, in his March order found that sovereign immunity protected the trustees board and that the professors in their arguments "fail to establish that they were in danger of sustaining injury as a result of the Revised Policy." He wrote that the allegations were "speculative" that the revised policy would possibly be used "to discipline or terminate a faculty member for reasons not covered or beyond those allowed in the original policy."

Borse said that the policy affects how he does his job now, however.

"I have to watch myself more closely, because I might be terminated for things that I say that I can't really define because the policy is so vague," Borse said.

In court documents in the federal lawsuit, the UA board argued that faculty "have always been on notice that the Board reserved the right to amend" the tenure policy, known in the UA System as policy 405.1. The UA System argued that "the most recent amendments lie at the heart of the Board's fiduciary obligation to maintain an efficient and productive workplace while preserving a robust marketplace of ideas."

The lawsuit as filed in June in Pulaski County Circuit Court argues that changing the tenure policy in the manner done by trustees in 2018 "violates not only the Constitutions of the United States of America and the State of Arkansas but also well-established Arkansas legal principles concerning the interpretation and unilateral modification of contracts."

The suit claims that the revised policy "puts all University of Arkansas System faculty at a much greater risk of being terminated, disciplined, or otherwise harassed based on an administrator's or trustee's disapproval of the content of a faculty member's teaching, research, service, or even statements made completely outside the campus setting."

In court documents, the professors ask the court to permanently halt officials from applying the revised policy.